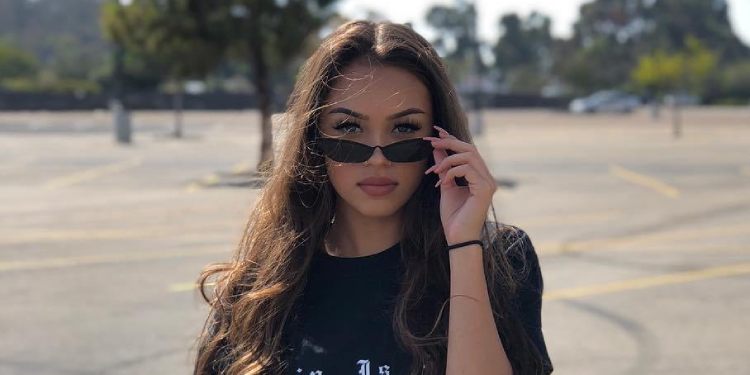 Aleina Topp is an American social media personality. She is famous for her TikTok videos, where she posts a lot of short comedy videos, lip syncs, and dance videos. Moreover, she is also a model, and she posts a lot of modeling photos on her Instagram handle. Please stick with us to know Aleina’s life and her career.

Aleina Topp was born on 20 September 2002 in California, the United States of America. Unfortunately, she has not shared the identity details of her parents. Likewise, she has also not talked much about her childhood. Because of this reason, we are unable to determine if she has any siblings or not. Besides this, she is currently 18 years old with the zodiac sign of Virgo.

Aleina holds an American nationality, and she belongs to mixed ethnicity. She descends from Cherokee, Danish, Kenyan, Nigerian, Dutch, and Japanese ancestry. Besides this, she has not mentioned which religion she practices at the moment.

Aleina stands at 5 feet and 3 inches (1.60m/160cm) tall, and she weighs around 60kg (132lbs). Sadly, she has not publicly shared the details concerning her exact body measurements. However, judging from her looks, we can tell that she has a slim body figure. In addition to this, her eyes are grey, and her hair is brown.

Aleina Topp’s educational background has not mentioned where she studied and completed her schooling. However, according to online sources, she is currently a high school graduate. However, further details on which educational institution she attended is a mystery.

Aleina is most probably single and not in a relationship with anyone at the moment. However, online sources suggest that she dated a guy who goes by the username (@kkrrizz). But she does not have any picture of him on any of her social media sites. Because of this reason, we are unable to confirm whether she is still dating him or not. Besides this, she has not married anyone yet, nor does she have any children.

Aleina began her journey to stardom through the video-sharing platform Musically, which is currently famous as TikTok. Her first-ever public video was a dance video on Justin Bieber’s ‘Sorry.’ This was her first step onto stardom as she started drawing a lot of attention through this video. It did not take long for her to gain thousands of likes and followers on her account.

Aleina is talking in millions as she has millions of followers and likes on her videos. She posts mainly lip-sync and dance videos on her TikTok account. The views that she gets on her videos are in five figures. Moreover, she also uploaded a couple of videos on YouTube. Most of the videos on her YouTube channel were questions and answers videos, daily routine videos, try-on-haul videos, and behind the scenes. Unfortunately, she is not that active on YouTube nowadays as the most recent video dates back to two years ago.

In addition to this, Aleina is also a model, and she has modeled for photographers like Trevon Session and his company, Kodak Session. Furthermore, she also promotes clothing brands like Fashion Nova, Lounge Underwear, and ootdfash Boutique through her posts.

Aleina Topp earns from her professional career as a social media personality. However, she also makes her fortune through her promotional modeling posts. As of 2021, the 18-year-old TikTok star has an estimated net worth between $500,000 and $1 million.

Aleina Topp is active on social media platforms. Her official Instagram account (@leinnaaaxo) has over 108 thousand followers. Likewise, her Twitter account (@LeinnaaaXO) has over 800 followers, but she does not seem to be active on Twitter. Similarly, her YouTube channel (Aleina) has over 9.7 thousand subscribers, but she is also inactive on YouTube. Talking about her TikTok account (@leinnaaaxo), she has over 1.3 million followers with over 15.7 million likes on her videos. In addition, she does not yet have an official Facebook page.