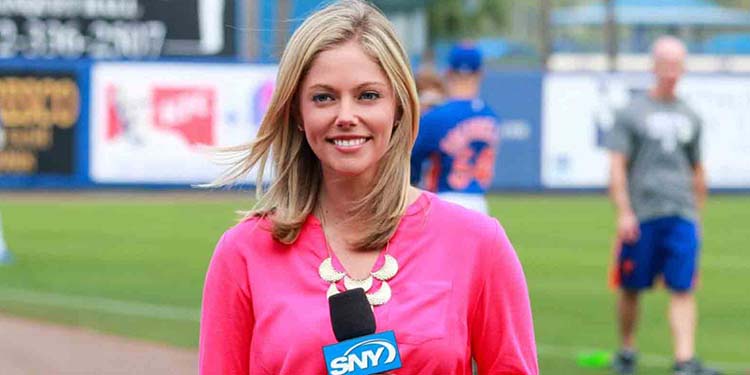 Alexa Datt is a reporter and sportscaster best known for being the spouse of radio disc jockey Peter Rosenberg, who also works for World Wrestling Entertainment (WWE). For most of her career, she has worked with a number of sports programs, with an emphasis on Major League Baseball (MLB).

She was born on the 22nd of November, 1985 in Derwood, Maryland, United States of America (USA). There is very little detail about Alexa’s childhood because the media hasn’t paid much attention to her during this period. She developed a deep interest in baseball at a young age, growing up watching numerous baseball games with her brother.

Alexa’s nationality is American and her ethnicity is White.

She has a slim body and stands at an average height but her exact height and weight are not known to us. The color of Alexa’s hair is blonde and she has stunning blue eyes.

She has not disclosed where she completed her high school. She enrolled in the University of Maryland after graduating from high school to pursue a degree in broadcast journalism, and after finishing her university study, she pursued a second degree in Spanish language and literature.

Alexa Datt began her professional career as a production assistant for the Fox network’s half-hour television program “America’s Most Wanted,” which included recreations of risky fugitives interspersed with on-camera encounters and voiceover commentary.

Every episode included images of dangerous fugitives, and the show has contributed to the arrest of more than 1,200 people. Her contributions to the show included assisting with reenactments and the like, but she didn’t want to pursue a career in production, opting instead to work in the sports industry.

In 2009, she quit the show and joined the SportsNet New York team as part of a series called “Mets Insider.”

Alexa married Peter Rosenberg in September 2012 after seven years of dating, according to her personal life. The couple met and began dating while attending the University of Maryland, according to sources. On their way to a party, he proposed to her on the Brooklyn Bridge, which ended out being a surprise celebration for their engagement. Their wedding took place on a beach in Bayville, and the pair now lives on Manhattan’s Upper West Side.

Peter Rosenberg is a radio DJ and TV host best known for his recent work with WWE as the host of the WWE Network program “Bring it to the Table.”

What is Alexa Datt’s Net Worth?

Alexa Datt’s wealth may have increased as a result of her husband’s success, who has a similar net worth. It is predicted that as she progresses in her career, her wealth will grow as well. Alexa is estimated to have a net worth of $600,000.