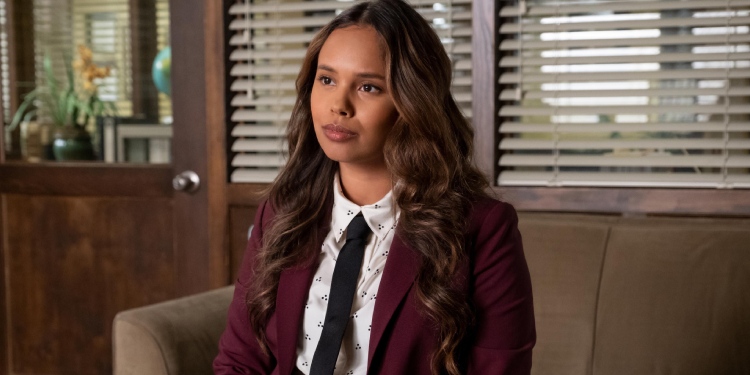 Alisha Boe, a Norwegian-based American Actress, Professional Model, and Social Media star. She got renowned for her new debut in the Netflix drama show ‘Thirteen Reasons Why (2017-2018), playing the role of ‘Jessica Davis.’

Alisha Boe was born in Oslo, Norway, on March 6, 1997, turning 24 this year, 2021. Her father is Somali, and her mother is a Norwegian named Vibeke Boe from Trondheim. When she was a kid, her parents had a divorce, and after a certain time, her mother married an American, at the age of 7, moving to Los Angeles with her mother. She has been holding a Norwegian Nationality and belonging to Multiracial Brown Norwegian Race.

She currently resides in Los Angeles, California, USA. Her sun sign is Pisces. Alisha is of Somali and Norwegian ancestry lineage. Alisha’s full name is Alisha IIhann Bo. About her siblings, she has a younger brother. Unfortunately, there is not much information regarding her family and siblings. She has two dogs named Luna and Tater Tot.

About her educational background, Alisha Boe went to El Camino Real High School at Woodland Hills district of the San Fernando Valley region of Los Angeles, California. She participated in a drama program there. Then she also went to Woodlake Elementary School, and two middle schools named George Ellery Hale Middle School, Ivy Academia. She graduated from George Ellery Hale middle school. Alisha also went to Olin Virtual Academy for her junior and senior year of her High School. After a while, she quitted high school to move forward in her acting career. She had got a break in movies and TV shows.

Alisha Boe has an amazing body physique, and she is tall. Her height is about 5ft. 3 inches or 163 cm weighing 51kg or 112 pounds. Her body measurements are 33-25-34 inches. Her shoe size is 6. She has dark brown curly hair and dark browns color eyes.

You might also want to check out Kerris Dorsey

Career: Rise to the Fame

Alisha Boe stepped into her acting career in 2008 by making her acting debut in a horror movie named ‘Amusement’ directed by John Simpson. She portrayed the younger version, ‘Lisa Swan’ and co-starring with Jessica Lucas, Katheryn Winnick. After that, she acted in the movie ‘He’s On My Mind’ playing the role of ‘Laci’ in 2009 directed by Kazeem Molake, ’Plastic Makes Perfect ‘ as ‘Brooke’ by Ann Finnegan, ’Paranormal Activity 4’ as ‘Tara’ in 2012, ’68 kill ‘ as ‘Violet’ in 2017 by Trent Haaga.

To date, she has starred in a total of five movies. She debuted in the series ‘Trophy Wife’ as ‘Chelsea Trassen ‘ in 2013. After that, she emerged in ‘Modern family’ as ‘Tracy McCoy’ released in ABC network. She then performed in the two episodes in the series ‘Extant’ as ‘Brynn Hendy’ by Steven Spielberg aired on CBS network, ‘Days of our lives as ‘Daphne’ in 2015.

She made her appearance in many other TV shows like ‘Ray Donovan;,’ Casual,’’ NCIS,’ and ‘Teen Wolf.’ However, Alisha came into the media limelight after ‘Jessica Davis ‘in the Netflix series ’13 Reasons Why’ released on March 31st, 2017, running till June 5th, 2020. In this series, she played the role of a victim of abuse and harassment. She performed her role very compellingly and gained recognition for her acting. She is very close to this role because she was bullied or tormented at her middle and high school. This teen drama, mystery, and thriller series had four seasons containing 49 episodes produced by Joseph Incaprera.
Alisha did her exploration for her character before the show got started for the role of ‘Jessica Davis.’ She discussed with a family friend who was a rape survivor and consulted about the complexities and mindset. She was a part of a project named ‘Project Semicolon’ along with her 13 Reasons why co-star Tommy Dorfman and executive producer Selena Gomez. She even got a semicolon tattoo in her arms for raising awareness of the project and helps decrease the rate of suicide in the youth.

You might also want to check out Giorgia Whigham

Alisha Boe is currently single. However, it is said that she was in a relationship with Scott O’Brien. She is invested in her career.

Alisha Boe is positively active on social media network platforms. She has over 4 million followers on Instagram with 175 posts and Twitter with over 257k followers.