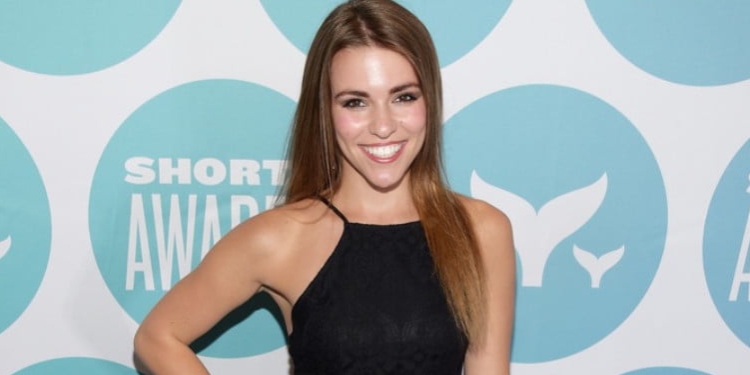 Amymarie Gaertner is a self-taught dancer and choreographer from the United States who became a Vine video sensation and garnered over 4.2 million followers. Amymarie Gaertner also appeared in Dance Camp, a YouTube Red original film.

Amymarie was born on the 5th of August 1994 in Ohio, United States of America (USA). Amymarie has not revealed any details about her father, mother, or siblings. Similarly, she is an American citizen, and her ethnicity is White. Her zodiac sign is Leo.
Gaertner grew up listening to rock, country, acoustic, dubstep, and mainstream music on the radio in the 1960s and 1970s and enjoys a wide range of musical genres. She used to dance in the cellar of her home as a teenager. She can play the drums as well, but she doesn’t fancy herself a drummer.

Gaertner is a stunning social media star with a height of 5 foot 6 inches or 1.67 m and a weight of unknown. Her additional details, such as her body measurements, are also unavailable. Amymarie Gaertner has brown hair, and the color of her eyes is brown as well.

Amymarie is a self-taught American dancer, choreographer, actress, and social media celebrity who rose to fame after posting six-second Vine videos of her freestyle dancing moves. She taught herself how to dance and can dance to any song.

“Dylan and I spend Monday nights,” her first vine video, was a stop-motion video. She also worked with Jake Foushee soon afterward. The two collaborated on a Vine video titled “The throwback song you can’t sit still to.” Aside from that, she’s done a few exclusive collaborations.

She also starred as Vanessa in the YouTube Red original film “Dance Camp” in 2016. She also played Elektra in an episode of ‘The Boonies‘ and Audrey March in three episodes of ‘Guidance‘ in 2017. She also starred in the web series “Sanders Shorts” episode “A Sudden Duet!” created by fellow Viner and online celebrity Thomas Sanders. She also appeared in several more videos on Thomas’ eponymous comedy and music series.

In 2015, she was nominated for the ‘Dancer of the Year award‘ at the ‘5th Annual Streamy Awards,’ and in 2016, she was one of the Finalists in the Dance category of the ‘8th Annual Shorty Awards.’ Similarly, in 2015, she co-hosted the Halloween version of “Dancing with the Stars.”

Gaertner’s relationship status is unknown, but she is most likely single and without a partner. However, this may also be wrong since nothing is known about her personal life to be verified.

Despite becoming a social media star, she has kept her personal life relatively private. More specifically, she has not revealed any details about her love life or relationships to date. Furthermore, she is often linked to fellow Youtuber Logan Paul due to their frequent sightings, but she categorically denied the claims, stating that they are just good friends.

Similarly, she explained their dating rumors in a February 2014 Q&A video, saying they learned they lived close by after connecting via Vine and began to hang out more frequently. They’ve also collaborated on several Vines and finally became good friends. Furthermore, she has successfully maintained a clean profile for a long time while being connected to the social media community. She has never been involved in any controversy or rumors.

When it comes to Gaertner’s net worth, she is becoming more popular on online platforms and has received a considerable amount of money. In addition, she is very popular and well-known on TikTok, where she has many followers and views on her videos.

Therefore, based on the most recent estimates, this stunning dancer’s net worth is around $5.4 million.

Before the parent company Twitter shut down Vine in January 2017, she had a whopping 4.5 million followers.