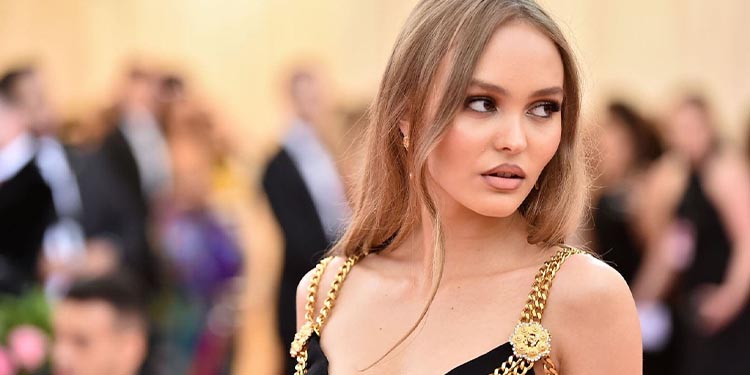 Lily-Rose Depp, the French-American actress, and Austin Butler have found themselves to be a topic of rumor and discussion recently after the two were spotted in public together, sharing a kiss.

On August 9, the online version of ‘The Mail’ published a series of photos of the couple showing public displays of affection in the streets of London after enjoying a romantic dinner together.  The Once Upon a Time in Hollywood actor, who is 29 years old, leaned against a brick building in a bomber jacket and jeans as he held Depp and kissed her, as the photograph was taken.

The pictures show Lily-Rose and Austin hugging and kissing each other on the sidewalk leading everyone on the internet to believe that the two are officially ‘a thing’ now, and many netizens have been spreading the news like wildfire.

Lily-Rose, the daughter of Hollywood actor Johnny Depp was previously in a romantic relationship with model Ash Stymest, but the couple dated a few years back and parted their ways without much news. Afterward, it was said that she dated actor Timothée Chalamet in 2018 after the pair apparently met during the shoot for The King, in which they both shared the screen but didn’t give much air to the relationship and ended things in 2020.

Earlier this year, there were even rumors that the pair might be rekindling their relationship after Lily-Rose and Timothée were seen jewelry shopping in New York City in April, but the photographs that have surfaced recently put an end to that rumor mill.

On the other hand, Austin was in a long-term relationship with High School Musical actress Vanessa Hudgens from 2011 to 2019 for more than eight years. However, reports surfaced in 2020 that the pair had split, and no information about the breakup was made public.

Hudgens and Butler had been trying to make a long-distance relationship work as they both remained busy with their careers, as the actress starred in a number of Netflix Christmas movies, including The Princess Switch: Switched Again, which was shot in the U.K. in November of 2019.

Look at their calendars; both Lily-Rose and Austin have a busy schedule in the upcoming year, with Austin currently working on his Elvis Presley biopic where he plays Elvis himself as well as a T.V. series called Masters of the Air. Lily-Rose, too, has two movies set to release this year, Silent Night that stars Keira Knightley on lead and a drama called Wolf.

Both the films are set to premiere at the Toronto International Film Festival in September.

Austin and Lily-Rose are both active on their social media accounts but are very reserved and private when it comes to personal lives. They have not yet spoken about their relationship publicly, and until we hear from the actors themselves, it might be the best idea to keep our minds open and not jump to conclusions based on rumors.

Some of the productions Austin Butler has worked on are: The Dead don’t Die, Once upon a time in Hollywood, and Television series like CSI: Miami, CSI: New York, The Carrie Diaries, and D.C.’s Arrow.

Lily-Rose Depp, too, has performed in some notable films at her young age like The King, Crisis, and Voyagers. She has even worked on a Netflix documentary about women leading a quiet sexual revolution among women in India, entitled: Period. End of Sentence.