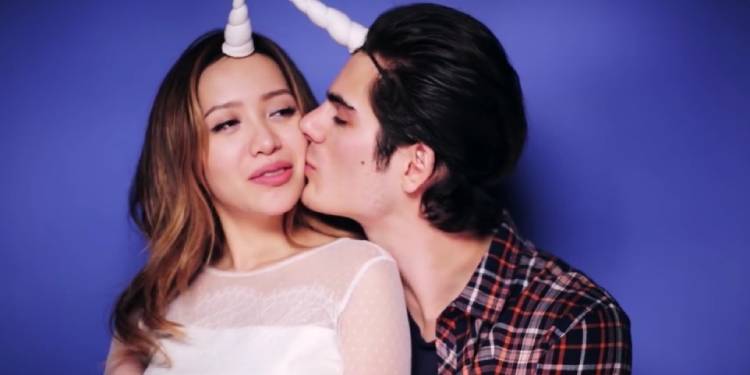 Michelle Phan is a 34-year-old makeup artist, voice actress, and entrepreneur from Boston, Massachusetts. She is well-known in the entertainment industry for her beauty videos on her YouTube channel, ‘Michelle Phan.’ Furthermore, she is also famous for her own cosmetics line, EM Cosmetics.

Dominique Capraro is a Swiss model by profession. Born and raised in Visp, Switzerland, he is famous as the runner-up in the Mr. Switzerland pageant. As of now, he is currently working with the modeling agency, Jaffa Models located in Chicago, Illinois. He is also popular for his attractive physique and women from all over the world go crazy for his body.

Michelle Phan and Dominique Capraro crossed paths for the first time back on Valentine’s Day of 2008. They met for the second time some years later during a photoshoot that took place in Paris. It was during this time that they talked to each other and became friends. Soon, they were able to work on their friendship and turn it into a romantic relationship. It is true when people say that friends who later go on to fall in love with each other have the strongest bonds as they are heads over heels for each other.

However, both Michelle and Dominique did not publicly talk about their relationship until 2012. Fans were demanding proof of their relationship and they finally made it public through her YouTube channel. Her channel has played a crucial role in his popularity as it was her who introduced him to the fashion industry. Furthermore, she makes a lot of videos with him and these videos get millions of views which further help in making him famous.

People know a lot about the couple as they share a lot of their moments with the fans. However, a strange incident took place back in 2015 when she decided to take a break from social media platforms. Following this short break, she has not provided the fans with any information about her personal life. So, please stick with us to know if the two lovebirds tied their knots or went their separate ways instead.

There is no solid proof about Michelle and Dominique’s relationship at the moment. She has decided to keep her personal life private to herself for reasons unknown. She has also not posted any pictures of the two of them together but she has also not taken down any of the existing content of her and Dominique either. According to her interview with DailyMail, she states that she took that “break” in order to deal with depression. The break lasted for over a year and her fans thought that she was dead. However, she came back and decided to work on her cosmetics line which had failed back then.

Furthermore, Phan also states that she traveled to various places like China and Egypt battling depression all along the way. Despite making a return on social media platforms, she has not posted any pictures of her boyfriend. The two of them are still connected on social media platforms which provides us with a piece of evidence to say that they are still together. This left 9 million fans curious to know what happened to their relationship. But she has not confirmed the status of her relationship. Because of this reason, everything that exists at the moment is a hoax and just speculations.