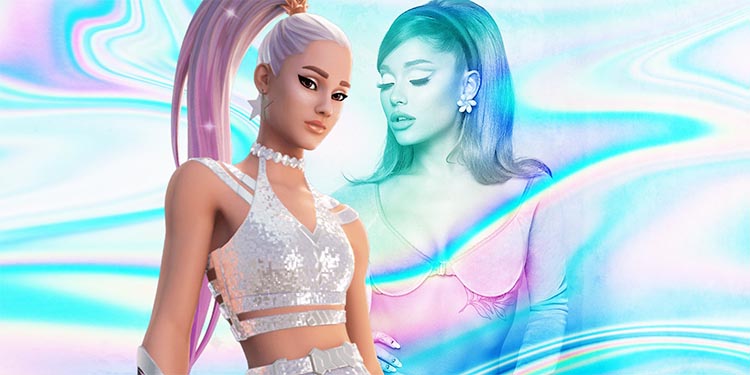 American pop singer Ariana Grande is set to headline a virtual in-game concert on the popular online game Fortnite. The ‘Thank U, Next singer will be performing songs live as a part of the Rift Tour, which kicks off on Friday, August 6, 2021.

The three-day-long competition has been described as a “musical journey into magical new realities where Fortnite and Ariana Grande collide.” Ariana opened up about her inclusion with the gaming platform Epic Games and the Fortnite special event by saying, “Working with Epic and the Fortnite team to bring my music to life inside the game has been so fun and such an honor. I can’t wait to join my fans and see all of your reactions to such an unforgettable, magical journey to new realities.”

The player will be present in the game as a character, and her in-game skin has already been released by the game producers. It has been said that the customizable skin, which features her signature high ponytail look, is available for purchase for other players as well.

The official Twitter handle for Fornite caused a riot when they tweeted, “Excuse us, Ariana is coming!“.

The 28-year-old pop superstar who released her sixth studio album, ‘Positions’, last October has followed in the footsteps of the likes of artists like Marshmello and Travis Scott by appearing in Fortnite, the trendy battle royale game.

On a side note, the artist has also been urging her fans to get vaccinated as soon as possible and help end the global pandemic by a collective effort.

The ‘God is a Woman’ hitmaker took to social media on Sunday to offer a reminder to those who are not yet vaccinated. She also shared links to spread awareness about the dangers of the delta variant of the Sars-Cov2-COVID 19 virus that is proven to be more lethal than the previous mutations.

With cases increasing in the UK and the US, Ariana Grande has issued a social request for everyone to stay safe during these times. Already getting her vaccine, she posted a picture getting jabbed with the caption: “vaxxed n masked.

“this is your gentle reminder to please get your vaccines if you are eligible. this thing is not yet over. I’ll be sharing some info because I care, and if i can, i’d like to help anybody who is hesitant or curious with making their decision.”, she added to the post.

“this delta variant is very new and since data is changing all the time, i’ll source some links for you to stay up to speed yourself but so far … we do know that it spreads much more easily compared to previous variants. Most of the spread is among unvaccinated people and in areas with low vaccination rates !” she added.

“and yes, although you can still get it while vaccinated, the vaccine helps to protect against severe illness, hospitalization, and death! All great things to be protected against in my book. oh, and if you have already gotten sick with COVID-19, you should STILL get vaccinated!”, she continued urging everyone to get the vaccine for their good health.

The ‘Seven Ring’ singer insisted that people may actually “save a life or two” by getting their vaccine, as it could help to protect those who can’t get jabbed yet.

“please and reassure yourself why getting vaxxed is the move. Save a life or two. Who knows.” she said.

Rihanna Is Now Officially A Billionaire

According to Epic Games, the parent company of Fortnite and the gaming platform, The Rift Tour will comprise five shows or across three days to ensure fans around the world can tune in. Shows are scheduled for August 6 at 6 PM Eastern Time and August 7 at 2 PM Eastern Time, with the three remaining segments all taking place on August 8 at 12 AM, 10 AM, and 6 PM, all Eastern Time. Fortnite has recommended the players to tune in to the game an hour before the show’s start to enjoy the full “Rift Tour Playlist” and many other Fortnite-themed experiences they can’t miss out on.