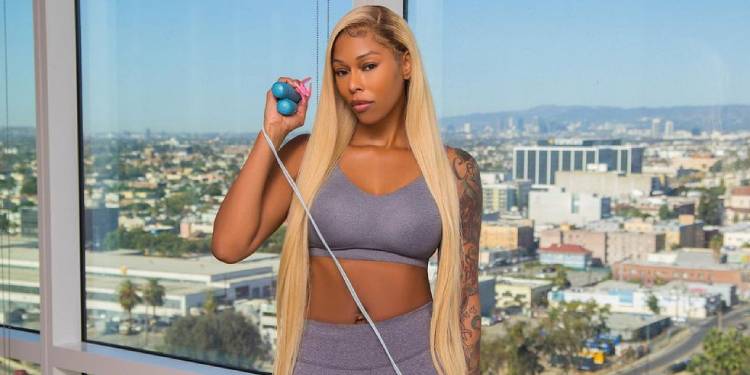 Bambi Benson is an American actress, entrepreneur, and beauty enthusiast. After starring in the reality television series ‘Love & Hip Hop: Atlanta.’ She also runs her fashion line called the House of Shimmer and the Shimer Elite Extensions.

She is also famous as the beautiful wife of the rapper Lil Scrappy. Please stick with us to know more about Bambi and the details of her life.

Benson’s real name is Adiz Benson. She has had a lot of on-screen names like Bambi, Addie Shanette Benson, Adizia Benson, and Adi Benson. She was born on 1 March 1986, and she is a native of Compton, California, the United States of America.

Her mother’s name is Cece Shaw, and her father’s name is Larry Benson. Not much is available about her father, but her mother did appear on ‘Love & Hip Hop: Atlanta.’ Sadly, she has not revealed if she has siblings or not. Besides this, she is currently 35 years old with the zodiac sign of Pisces.

Bambi holds an American nationality, and she belongs to mixed ethnicity. She descends from the African-American race through her parents’ side. She is a Christian, and she practices Christianity.

Talking about her education, she is a graduate of a California-based educational institution. Sadly, she has not let out the name of the school she attended. Likewise, we are unable to determine where she pursued her higher education. But we do know that she graduated with degrees in journalism as well as broadcasting.

Benson gave her debut performance in the entertainment industry in the year 2008. She played the small role of Pontius Pilate’s wife in the family movie, ‘Color of the Cross 2: The Resurrection.’

Fans gave her the nickname Bambi after portraying the role of Bambi twice in two different movies. The first movie was the 2015 movie ‘Damaged Goods.’ Likewise, the second movie was the 2018 comedy, romantic drama movie, ‘Beauty and the Beholder.’

The breakthrough moment of her career came when she appeared in the reality television series ‘Love & Hip Hop: New York.’ The series focused on the lives of some elite personalities in the entertainment industry.

It focuses mainly on the dramatic parts of their lives. Initially, she appeared for only a single episode, but then she would make a recurring appearance in different seasons of the series.

Apart from being a famous television personality, Bambi is also an entrepreneur, and she has her fashion line. Her one-stop-shop, House of Shimmer, provides the customers with a lot of health and beauty needs.

Visitors can visit and purchase a wide variety of clothing apparel and accessories from the site. In addition to this, she also handles the Shimmer Elite Extensions. This fashion line includes mainly eyelash extensions and hair extensions.

Bambi is currently married to her husband, and his name is Darryl Kevin Richardson. He is professionally known in the media as Lil Scrappy.

According to sources, they have not talked much about how their relationship began, but they dated for many years before tying their knots. However, the lovebirds walked down the aisle together on 8 September 2017.

Following their marriage, Bambi Benson and Lil Scrappy welcomed their first child together, and his name is Breland Richardson. In addition to this, they welcomed a daughter, and her name is Xylo Richardson.

Moreover, the couple also announced on 1 March 2021 that they were expecting a third child soon. She gave birth to their third child, Cali Richardson, on 25 July 2021.

Net Worth of Bambi Benson

Benson earns from her professional career as a television personality. In addition to this, she also makes a handsome amount of fortune through her fashion lines.

She is also an active Instagram user with millions of followers. As of the year 2021, she has an estimated net worth of around $1 million.