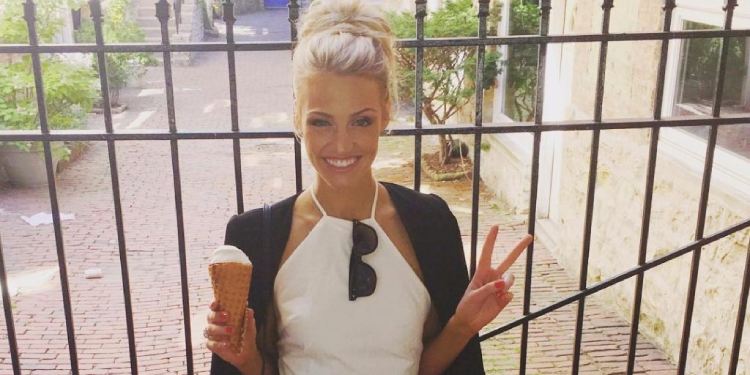 Talking about her parents’ relationship, they met by chance on the plane back in 1982. Her mother was working for United Airlines, and her father was traveling as a passenger. According to them, it was love at first sight, and they have been inseparable ever since. She grew up alongside her elder sister, and her name is Margot Shimkus. Besides this, she is currently 34 years old with the zodiac sign of Scorpio.

Carley holds an American nationality, and she belongs to mixed ethnicity. She descends from Puerto Rican ancestry through her mother’s side and Lithuanian origin through her father’s side. Furthermore, she is a Christian and practices Christianity as her religion.

Carley Shimkus studied at the West Morris Central High School. In addition to this, we also know that she was in a “hippie” stage back in her high schooling days. She stated this in an interview with Fox News when they decided to ask her a few questions from her high school yearbook. However, for further studies, she studied at Quinnipiac University. She graduated from the university with a Bachelor of Arts degree in broadcast journalism.

Carley is currently married to her husband, and his name is Peter Buchignani. The two of them studied in the same college and were in the same batch from 2005 to 2009. She met him when she was around 23 years of age. It was in the year 2013, and they have been together ever since. Their marriage took place two years later, in 2015. The two of them are huge supporters of Michigan football. Their obsession with the sport resulted in the team’s fight song being their exit song at their wedding.

Unfortunately, the couple is currently maintaining a long-distance relationship due to their jobs. Carley is currently working in New York City while her husband Peter spends most of his time in Chicago. Sadly, the exact details regarding his work remain behind the curtains. Besides this, her maternal grandmother Margarita Aponte was also a famous personality. She was one of the founding members of the Sacred Heart Chapel in Lorain. In addition to this, she was also an active participant in the Cursillo Movement, a Roman Catholic Church’s apostolic movement.

Carley Shimkus initially dreamt of modeling due to her 5 feet and 10 inches height. In addition to this, she also modeled few times during her high schooling days. But then, she decided to build her career in the news industry.

Carley joined the internship program during her college years. She joined the Fox Office as an intern and worked as an intern until she completed her graduation. After completing her education and earning a Bachelor’s degree, she was able to grab the position of news correspondent. Soon, she was promoted and began working as the associate producer for ‘Imus in the Morning,’ a television show. After working for the show for some time, she began working as the assistant producer for the Fox Business Network. She was also making appearances in Fox shows like ‘Mediabuzz,’ ‘Fox and Friends,’ and ‘Fox and Friends First.’

Carley Shimkus earns from her professional career as an anchorwoman and as a television personality. She has successfully gathered a handsome amount of fame and fortune through her on-screen career. She is estimated to have a net worth of $1 million as of 2021.