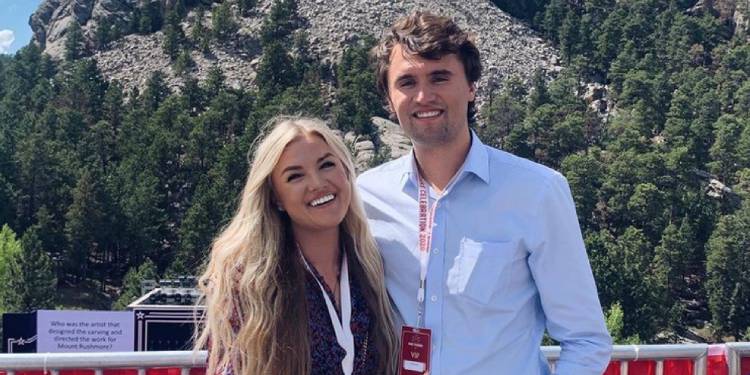 Charlie Kirk is a well-known activist as well as a talk show host. He is a famous personality and is often in the spotlight, but he recently stole the limelight by opening up about his marriage. The 27-year-old CEO of the non-profit organization called Turning Point USA has married his fiancée, Erika Frantzve. Please stick with us to know more about his married life.

Charlie Kirk opened up about his marriage on 25 May 2021 when he posted a picture from his wedding and captioned the image, “Forever.” Likewise, his wife also posted photos from their marriage, thus confirming that they have tied their knots. Furthermore, she also revealed that they married on 8 May 2021 and their marriage ceremony took place in Scottsdale, Arizona.

Erika also expressed that her husband reminded her of God because he loved her unconditionally, selflessly, deeply, and truly. She also expresses her happiness for being in a marital relationship with someone who she loves and respects. She has also changed her name from Erika Frantzve to Erika Kirk on her Instagram account.

Talking about their engagement, Charlie proposed to her by getting down on a knee and asking her to marry him on 2 December 2020. Erika said yes to his proposal, and they have also posted cute pictures of him proposing to her. Moreover, Charlie uploaded a video on his official YouTube channel and titled it “I’m Engaged!” The two of them have been inseparable ever since.

You might want to check out Michael Bolton’s Dating History.

Erika Frantzve is also an activist, just like her husband. The couple also shares the same philosophies when it comes to politics. Charlie Kirk believes in the Republican Party, and so does she. Fans and the media have been able to spot the two of them together on numerous occasions, like supporting President Donald Trump and his administration.

Moreover, they frequently talked about how they would re-elect the former President and save the country through his administration.