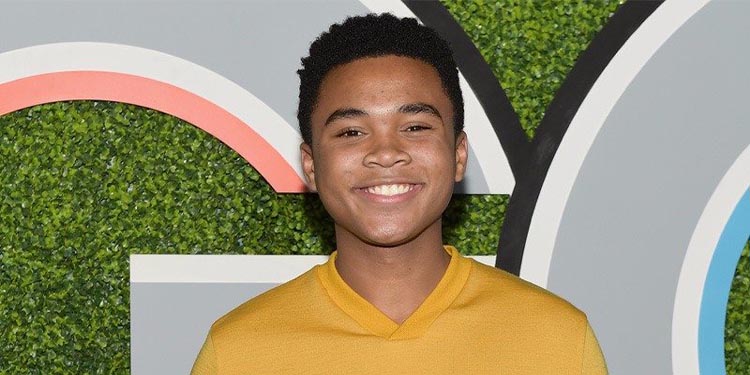 Chosen Jacobs, an American actor and singer famous for his recurring role as Will Grover on the CBS television Hawaii Five-0 and his role as Mike Hanlon film adaptation of the Stephen King Novel in 2017, following through IT –Chapter Two.

Chosen Jacobs was born on 1st July 2001 in Springfield, Massachusetts, the USA, turning 20 this year 2021. He was born in Massachusetts, the USA holding an African-American nationality belonging to African -American ethnicity. He got raised in Atlanta as his family transferred to the city when he was young. About his parents and siblings is not public yet. Although he has a sister, his father gave his named Chosen after hearing an Asian baby mumbling something similar to choose.

He had studied French and Mandarin. Jacob is compassionate for the homeless and co-operated with social organizations in Atlanta and Los Angeles. He is very close to his sister and his best friend. He is also a Marvel fan; he has expressed that he wants to portray a Marvel character. He dreamt of playing the role of Muhammad Ali, and his favorite cartoon character is teen ninja Naruto Uzumaki. The information regarding his educational qualifications, where he graduated from is not revealed yet.

Chosen Jacobs has a handsome, fantastic body physique. He is tall with a height of about 5ft 7 inches, weighing about 62kg. He has short black-colored hair with a pair of black eyes.

You might also want to check out Lisa Gerritsen

Chosen Jacobs stepped into his career as a musician and also a singer. He played musical instruments like piano and guitar. He began singing with the ‘Georgia Boys Choir’ at the age of six and worked in many concerts regarding locals, nationals, and international. His mother helped him got into theatre classes, and from that, he began more bent towards his acting skills. Jacobs started his acting career at the age of ten and played several roles in plays like ‘Hairspray,’’ Into the Woods,’ and ‘The King and I.’ His first commercial was named ‘Hot Wheels,’ which was his first on-screen role. Later his parents and sister transferred to Los Angeles to move forward in his acting and music career in 2015.

Chosen Jacobs played a recurring role of Will Grover in the sixth season of the famous American action police procedural television series named ‘Hawaii Five-0’.Till now, he is working on the seventh episode of the series. He has played the role very well, portraying the sweet, adorable, and witty teenage son of Lou Grover.

He also worked in the ‘Hooky (2016) as Bradley written by A.Plancher and also directed a short drama film named ‘Remnant’s’ gaining the award in the nomination of Best Supporting Actor in a Movie at the ‘Endless Mountains film festival.’ Also, he won the ‘Best on-screen team ‘award at the MTV Movie Awards for their work in ‘IT’ with Jaeden Lieberher, Jeremy Ray Taylor, Jack Dylan Grazer, Finn Wolfhard, Wyatt Oleff, and Sophia Lillis.

Chosen Jacobs got presented in the ‘IT movie playlist’ on Spotify a Jacobs’s song titled ‘Losers’ written and produced. The role of Young Michael in the action movie called ‘Cop and Robbers’ was played by him in December 2017. He appeared as William in the single episode of ‘The Heat Wave,’ of the comedy series ‘American Woman’ on 19th July 2018, motivated by the American childhood actress, TV star, memoirist, socialite, and philanthropist named Kyle Richards. Later he worked in web TV series aired on July 25, 2018, called ‘Castle Rock,’’ IT: Chapter Two, the sequel of It as Mike Hanlon aired on September 6, 2019.

You might also want to check out Mike Vitar

Chosen Jacobs is positively active on social media networking platforms like Instagram, with over 1.1 million followers and 209.1k followers.

Chosen Jacobs’s net worth is estimated to be approx $1 million- $5 million, and his average salary is around $37,157.