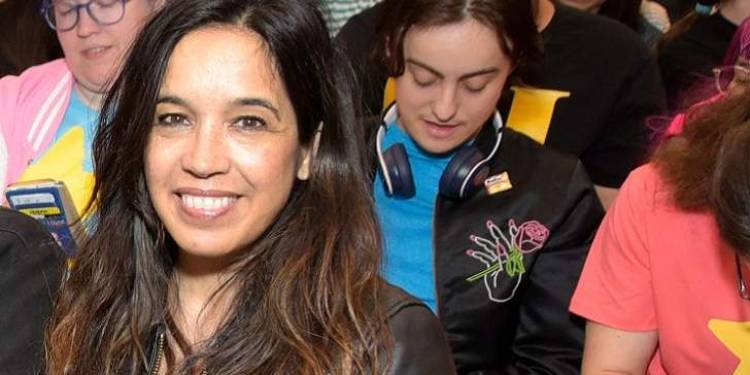 Connie Angland is an American costume and special effects artist. She has contributed her talent behind the screen to numerous movies, including the Men in Black series. In addition to this, she is also a celebrity spouse. She is famous as the sixth wife of the award-winning American actor and musician, Billy Bob Thornton. Please stick with us to know more about Connie and her life journey.

Connie Angland’s birth name is Constance I Angland. On 22 October 1964, somewhere in the United States of America. She was born to her mother, Angie Pepper, but she has not yet revealed her father’s name. However, we know that her mother went on to marry her stepfather and the award-winning movie editor, director, and sound designer, Walter Scott Murch. His best works include movies like Apocalypse Now and The Godfather: Part 2.

Connie grew up alongside one biological sibling and two stepsiblings through her stepfather’s side. Her biological sibling’s name is Carrie Angland. Likewise, her stepbrother’s name is Walter Slater Murch, and her stepsister’s name is Beatrice Murch. Besides this, she is currently 57 years old with the zodiac sign of Libra.

Connie Angland is an American by nationality, and she belongs to the Caucasian ethnicity. However, she descends from British and Irish ancestry through her parents’ side. Apart from this, information regarding her religious background is currently a mystery. Likewise, she has also not shared her educational background at the moment.

You might want to check out Nicole Scherzinger from ‘Men in Black.’

Connie Angland stands at a decent height, is 5 feet 3 inches (1.60m/160cm) tall, and weighs around 55kg (121lbs). In addition to this, she has an hourglass-shaped body figure with a body measurement of 34-28-34 inches. Furthermore, the color of her eyes is dark brown, and she has brunette hair.

Connie Angland has worked in many different fields throughout her professional career in the entertainment industry. She completed her first professional work in the year 1990. She worked as an animatronic engineer for the comedy, horror, and thriller movie, Arachnophobia. She has not made many on-screen appearances, but she has contributed a lot of her efforts and talents off the screen.

Following her work as an animatronic engineer, Connie worked as a purchasing agent of the additional crew department for the drama movie, Naked Lunch. In addition to this, she has also worked as a puppeteer in different movies like Puppet Master 4 and Puphedz: The Tattle-Tale Heart. She has also helped in the effects department in her career. For example, she was responsible for the creature effects of the dinosaurs in the adventure, comedy, and family movie, Prehysteria! 2.

Connie Angland has been a part of the off-screen department of numerous movies during the 1990s. However, she is not that active in the entertainment industry due to reasons unknown. The most recent work of her career came in 2012 when she played a minor role of a woman in the drama movie Jayne Mansfield’s Car.

Talking about Connie’s presence on social media platforms, she prefers to keep herself away from social life. She chooses to lead a private life and keeps the details of her personal life away from the media’s attention. Because of this reason, she is not available on social media sites like Instagram, Facebook, and Twitter.

You might want to check out actor, Mike Colter.

Connie Angland is a married person. She is currently in a marital relationship with her husband, and his name is Billy Bob Thornton. He is an Academy Award-winning actor, musician, and moviemaker. He is best known for working as a writer, a director, and an actor in the 1996 American drama movie Siling Blade. He has married five times before tying knots with Connie.

Connie and Billy’s met for the first time in the year 2003. They embarked on a romantic journey ever since and have been head over heels for one another. They walked down the aisle together on 22 October 2014. He has three children from his previous relationships and one daughter with Connie. Her name is Bella Thornton. An exciting fact states that he has banned his daughter from being in a relationship with someone like him. He admits to having cheated in all of his previous relationships.

Net Worth of Connie Angland

Connie Angland earns from her professional off-screen career. She has worked hard on being one of the best in the business. As of 2021, she earns around $25,000 to approximately $86,000. Similarly, she has an estimated net worth of about $500,000.