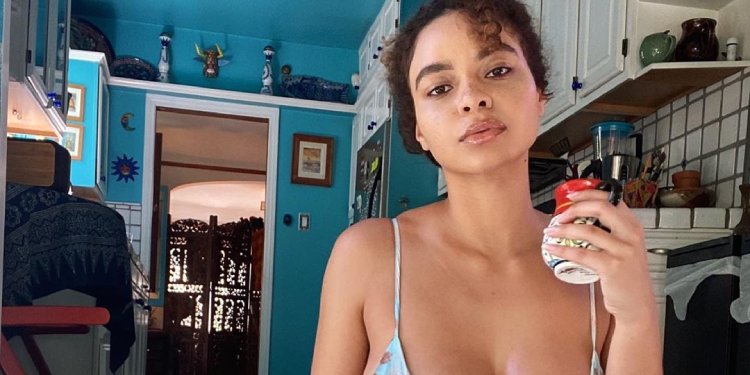 Crystal Westbrooks is an American social media personality and model. She is famous as one of the cast members of the reality television series ‘The Westbrooks.’ In addition to this, she also rose to fame when she used to date the Canadian rapper Drake. However, their relationship ended in a dispute. Would you please stick with us to know more about her life and her relationship?

Crystal was born on 6 March 1994 in Compton, California, the United States of America. She was born to her mother, Candice Westbrooks, and her father, Warren Westbrooks. Her parents together own the cigarette company called the Royal Blunts. She grew up alongside two brothers and four sisters. Her brothers are Pop Westbrooks and Blake Westbrooks. Likewise, her sisters are Brooke Westbrooks, Morgan Westbrooks, Bree Westbrooks, and India Westbrooks. Just like her, India is also an internet sensation. Furthermore, she is currently 27 years old, and the sign of her zodiac is Pisces.

Westbrooks holds an American nationality, and she belongs to mixed ethnicity. She descends from African-American, Mexican, and Creole ancestry. As well as this, she is a Christian who practices Christianity as her religion.

Crystal stands at the height of 5 feet and 3 inches (1.60m/160cm) tall, and she weighs around 59kg (132lbs). In addition to this, she has an hourglass-shaped body figure with a body measurement of 38-23-33 inches, respectively. Furthermore, her eyes are brown, while her hair is light brown.

Crystal studied at the Ambler Avenue Elementary School, from where she completed her elementary education. Then, talking about her high schooling, she studied at Santiago High School. During her schooling days, she expressed a communicative personality and was a free spirit. Because of this reason, her friends used to call her a hippie. After completing her high schooling, she enrolled at the Texas Southern University (TSU). She graduated with a degree in Business Finance in 2016.

Crystal was previously dating the Canadian rapper and musician Aubrey Drake Graham better known as ‘Drake.’ However, her relationship with Drake created problems with her sister India who dated Drake before her. She could not stand the fact that her sister is dating her ex-boyfriend. They even exchanged comments on social media platforms, but as of now, the fight has come to an end. Besides this, she seems to be currently dating Steven Russell, who is also a rapper. But she has not confirmed this, so we are unable to determine her current relationship status. In addition to this, she has not yet married or given birth to any children.

Crystal began her professional career through social media platforms. Her sister India inspired her to reach popularity, so she started her own Tumblr account initially and then moved towards Instagram. She started gaining a lot of followers on her Instagram account and was popular in no time. Soon, she began modeling and promoting various brands like Harley Dreux, The Queen, and Pegasus Makeup. She then launched her website called Crystal Curls, where her customers could purchase hair care products. Later, she added a section of swimwear products on her website and called it Crystal Bleus. She designs the swimwear and labels it at an affordable price for her customers.

Crystal and her sisters star in their reality television series called ‘The Westbrooks.’ It aired on the Black Entertainment Television channel and landed its debut episode in 2015. The series was somewhat similar to ‘Keeping Up with the Kardashians,’ which focused on the daily life of the Kardashian sisters. Likewise, their series focused on the everyday life of the Westbrooks sisters. This soon created a discussion among the fans, and they viewed the Westbrooks as a rival of the Kardashians. She also made a short appearance on YouTube, but she has not been much active.

Crystal earns mainly from her modeling career and through her reality series. In addition to this, her website is also a source of income for the young star. As of 2021, her exact net worth remains undetermined, but estimates show that it lies around $1 million.