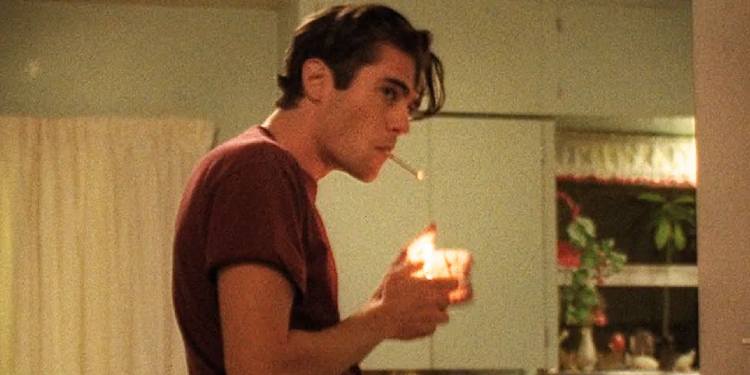 Dana Ashbrook is a well-known American actor. He is popular for playing Bobby Briggs in the mystery-thriller television series Twin Peaks (1990-1991, 2017). Ashbrook is also famous for being cast in the prequel movie Twin Peaks: Fire Walk with Me in 1992.

Dana was born on the 24th of May, 1967 in San Diego, California, United States of America (USA). His father’s name was Vernon L. Ashbrook and his mother’s name is D’Ann Paton. His mother is a teacher, and his late father was the drama department director at Palomar College. He grew up with two sisters named Taylor Ashbrook and Daphne Ashbrook who are writers and actresses respectively.

Dana’s nationality is American and he belongs to a White ethnic background. Dana is a tall man who appears to be of average stature in his picture but he has a height of 6 feet or 1.83 meters. He has a weight of around 93 kg or 205 lbs.

You might want to check out about Johnny Depp.

Dana is well-known for her portrayal of Bobby Briggs on Twin Peaks (1990-1991 to 2017). He did, however, make his film debut in 1978, in a film called Attack of the Killer Tomatoes! Dana then took a ten-year break from acting before making a big comeback as a guest star on the TV shows Cagney & Lacey and After School Special.

After that, Ashbrook portrayed the character of Joey in ‘She’s Out of Control‘. From there, he starred in ‘Twin Peaks’ as Bobby Briggs from 1990 to 1991. Dana had finally risen to prominence in the film industry at this stage.

Twin Peaks is a three-season mystery drama series that premiered in 1990. The show follows FBI agent Dale Cooper as he travels to the small town of Twin Peaks to solve a murder. Bobby Briggs is played by Dana. The TV show starred other actors like Kyle MacLachlan, Michael Ontkean, Richard Beymer, Lara Flynn Boyle, Warren Frost and, many more.

Shawn Spencer is the protagonist of the iconic American detective comedy-drama series Psych. Spencer possesses abilities that allow him to keep a keen eye on things. He inherited this ability from his former police father, who taught him to remember even the tiniest flaw in a given situation.

As a result, Spencer and his colleague embarked on a quest to solve crimes. Dana appears in two episodes of the series as Bob Barker / Jackson Hale. The TV show starred other actors like James Roday Rodriguez, Dule Hill, Timothy Omundson, Anne Dudek, Corbin Bernsen, Maggie Lawson, and Kristen Nelson.

You might want to check out about Marisa Tomei.

Ashbrook is married to actress Kate Rogal. On August 15, 2015, they married in a small wedding ceremony in Pittsburgh, Pennsylvania. There isn’t much information about their marriage, but based on their pictures on the internet, they seem to have a happy relationship.

Dana had a girlfriend called Marisa Tomei, who is also an actress before he was married to Kate. They started dating in 1999 and later agreed to split up.

Ashbrook has had a nearly three-decade career in the film industry. From the proceeds of his acting career, he’s managed to amass a sizable fortune. Ashbrook’s net worth is estimated to be around $2 million.

You might want to check out about Michelle Monaghan.