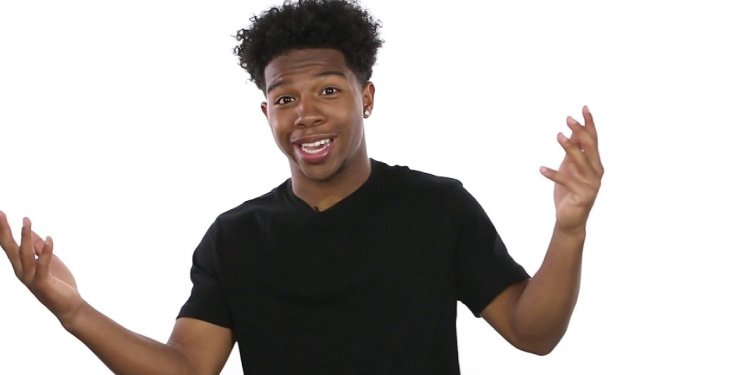 Deshae Frost is a stand-up comedian, actor, and social media celebrity from the United States who came to the limelight thanks to his funny comedy videos. He has collaborated on videos with Billie Eilish, Kingbach, Jay Versace, and several other superstars. His Youtube account has a following of over 3 million people.

Deshae was born on January 9, 2001, in Seattle, Washington, United States. Deshae’s mother’s name is Monique Carrillo. However, the name of his father is presently unavailable. Brooklyn Frost and Amare Frost are his two younger siblings. Deshae starred alongside Shemar Moore in the TV program S.W.A.T. He has featured his mother and siblings in his YouTube videos. His mum is also a YouTuber. Frost is an African-American citizen of the United States.

When it comes to Deshae’s academic credentials, there isn’t much information accessible. Deshae’s age also leads us to believe that he is enrolled at a university in his homeland.

While Deshae was eight years old, he determined to pursue a career in the world of entertainment. He began his musical career by rapping under the moniker D-Frost. His mom admired his talent and backed him up ultimately. Upon obtaining support from his entire family, he began practicing stand-up comedy and working commercially.

Deshae rose to prominence and started making his Vines, which he posted on social networks and garnered positive responses. Tony Roberts, Faizon Love, Tiffany Haddish, and a slew of other artists have worked with him.

You might also want to check out Josh McDermitt.

On April 23, 2011, he launched his own Youtube account, ‘Deshae Frost,‘ after achieving popularity in stand-up comedy. Many people have seen and liked his films, including Q&A videos, pranks, responses, challenges, and more. In addition, frost featured on various shows, including ‘Castor Oil,’ ‘Black Jesus,’ ‘Sketch House Show,’ ‘Chiefs,’ and ‘S.W.A.T.,’ to name a few.

Deshae’s career took a significant stride forward when he featured in an episode of the 2015 television series Black Jesus as a performer. For another two years, Deshae appeared in short movies. In the 2016 short movie ‘Castor Oil,’ he portrayed ‘Bowie,’ and in the 2017 short film ‘Stay Woke!,’ he played ‘Rafael Heat.’ That same year, he featured in CBS’ crime drama series “S.W.A.T.” as “Darryl.” Deshae had a great year in 2018, winning numerous acting roles. He had a cameo appearance in the ABC comedy Speechless. Ricky was his role in the tv movie Chiefs. He also had a role on the sketch comedy show Sketch House Show. Deshae appeared in the TBS comedy Angie Tribeca as Delroy.

Frost’s love, Kellie, appears to have been in connection with him before. KellieSweet is a very well-recognized YouTuber with her account. However, on February 9, 2019, the renowned stand-up comedian surprised his sweetheart with a vacation to Hawaii, which he documented on his YouTube channel. They appeared to be having a good time together.

Furthermore, the formerly dated Dregoldi, with whom he co-founded the Youtube account Shae and Dre Family until their breakup in 2019.

Frost has a net worth of around $1 million, which he has accumulated via his many careers. Deshae gets money from his YouTube channel as well.