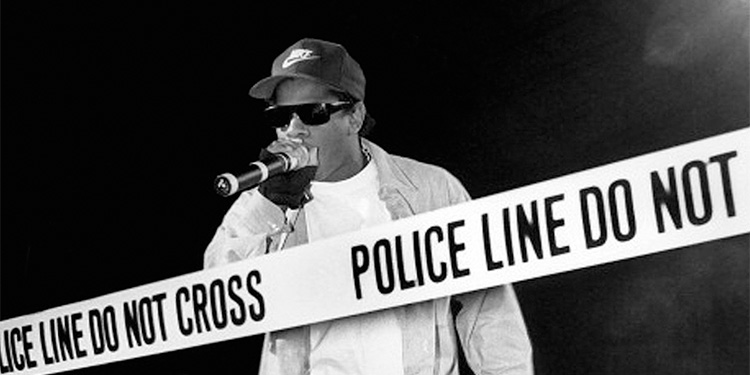 Eric Lynn Wright, better known by his rapper name Eazy-E was born on September 7, 1964. He was an American West Coast rapper who virtually created the genre of ‘gangster rap.’ The underground rapper, along with other contemporaries like Ice-Cube, Dr. Dre, DJ Yella, and MC Ren, were members of the rapper group N.W.A which has had its influence to increase the popularity of rap music in the United States more than anyone else.

Having been the major influence on the gangsta rap themes that would later dominate the commercial hip-hop market, the group became known for extremely violent and misogynistic lyrical content, with much of its sales fueled by adolescent male listeners who were empowered to objectify women and practice violence.

Easy-E was a rapper who has had a major influence on the American Hip-Hop scene, although today we listen to artists like Drake and Major Lazer, it was the N.W.A that diversified the rap genre, and true hip-hop fans from the 80s and the 90s claim that rap music today is nothing like what was supposed to be, or was, back in the day.

Together, the N.W.A released their first album, “Straight Outta Crompton,” which is regarded as a milestone achievement in the history of rap music and still considered by many to be the greatest ever.

Apart from having a significant legacy in the music industry, Easy-E also has left behind a legacy in his life that most people will find shocking.

The underground rapper fathered 11 children in his lifetime, with more than eight women.

Out of all the women he had relations with, he only married one, Tomica Woods. Easy met Tomica at a Los Angeles nightclub in 1991, and they got married four years later in 1995, only twelve days before his death. But they were in a fully functional relationship the entire period. In the four years of their relationship, the couple gave birth to a son, Dominick, and a daughter named Daijah, who was born six months after Easy-E had died.

On February 24, 1995, Easy was admitted to a hospital in Los Angeles following a violent cough. Upon examination and tests, he was diagnosed with HIV/AIDS. He publicly announced his health condition almost a month later. Although likely, Easy contracted the virus from a sexual partner, his children, and many in the gangster rap scene have debated that Marion “Suge” Knight was the one who injected him with a virus-infected syringe following their dispute regarding royalties and profit shares from the N.W.A. earnings. Only a month after his diagnosis, on March 26, 1995, Eazy-E died from AIDS-induced pneumonia. He was 30.

In interviews, his children have reported that the rapper would often bring them to his concerts. Lil’ E, the rapper’s oldest son, remembers watching his father perform with the group N.W.A. from backstage. In 1989, he remembres standing next to Janet Jackson as the group performed in Los Angeles.

Here is a comprehensive list of all the eleven children he fathered in his lifetime and their whereabouts today.

Eric Wright, Jr., known by his stage names Lil Eazy-E and Lil Eazy, is an American musician and HIV activist. Born on April 23, 1984, he is the oldest child of deceased rapper Easy-E. He followed in his father’s footsteps and gave his time to the gangster rap genre.  He is CEO of NWA Entertainment, a music production company he partners with his brother, Derrek Wright. He also manages Compton MoneyGang, a musical collaboration with his brother Derrek and members of his family. He was born and raised in the same Compton, California house his father grew up in.

Erin Bria Wright, or EB Wright, is the daughter of the late rapper Eazy-E. She is the first child Easy had with Tracy Jernigan. After she announced her dream project, Erin came to media attention, a documentary on her father’s life that would uncover all the secrets behind his controversial death and the custody battle that followed. She has teamed up with her mother and sister on the film and is currently making efforts to acquire the finances required for production.

Diajah is another one of Easy-E’s daughters. Her mother, on the other hand, is a well-known American film producer Tomica Wright. She was the child that Easy and his wife had after their marriage. Unfortunately, Easy had already departed when she was born. She was born six months after the rapper’s death. Because of her parents’ well-known American public profile, Daijah Wright has gained popularity globally.

Easy E’s daughter Henree Wright, also known by her rapper name ReeMarkable, is a hip-hop recording artist who became recognized for songs such as “Big Racks” and her freestyle set to Ice Cube’s “Jackin’ for Beats.” She is popular on Instagram, where she posts pictures of her lifestyle and music production for her 200,000 fans. Her mom, Kelly, is an African-American of Italian-Trinidadian origin. ReeMarkbale has a son named Cobe.

Son of a famous underground rapper, Dominick took on a different path than his father and made his career in acting. He was born in 1993 in Los Angeles, California, and is currently 27 years of age. He has worked as a stunt man and actor in movies like The Money, Mistaken, Count on Me, and more. He is also a model for cyclists. He has had a successful career with stunt roles in various Hollywood movies.

Erica Wright was still a small child when her father Easy-E died of HIV/AIDS in 1995. Having spent her early childhood with her father, she truly loves his father and the mark he has left in the rap music scene. She still lives in Crompton, California, and is often seen around the town in clothes similar to what her dad used to wear, mostly a Crompton t-shirt. She is Easy-E’s oldest daughter.

The only thing publicly available about Raven Wright is that she is Easy-E’s daughter. Apart from that, there is little to no information available about Easy’s daughter and her whereabouts. As a result, she stays out of the limelight and does not attend any parties or events where she is recognized as the famous rapper’s daughter.

Eazy-E’s son Marquise Wright also known by his rapper name Yung Eazy was born on February 14, 1990. Yung Easy has followed in his father’s footsteps and is working to become a rap artist. He has a YouTube channel named IAmYungEasy and produces independent rap tunes and music. He has also talked about his father being killed not by an STD but by a deliberate attempt to inject him with an HIV-infected syringe. However, he is keeping his father’s legacy alive in his music and his name.

Easy’s third son, also sometimes mentioned as the second, Derrek Wright, was born on January 28, 1988, in Crompton, California. Much like his father and his elder brother, Derrek is a rapper and produces music similar to his father. Of all the children Easy fathered, Derrek and his brother Eric truly follow the legacy and promote their father’s music via their own music. Derrek even dresses and looks very similar to his father.

He also appeared in the music video for ‘Only If You Want It,’ alongside his father, when he was only eight years old. He took time to grow as an artist, and now he’s making good music continuing his father’s legacy.

There is no information available about Easy E’s children Elijah Wright and David Wright. However, we can confirm the names are accurate from various local sources and interviews. Still, apart from that, there is no present update about the two and their professional life or whereabouts.