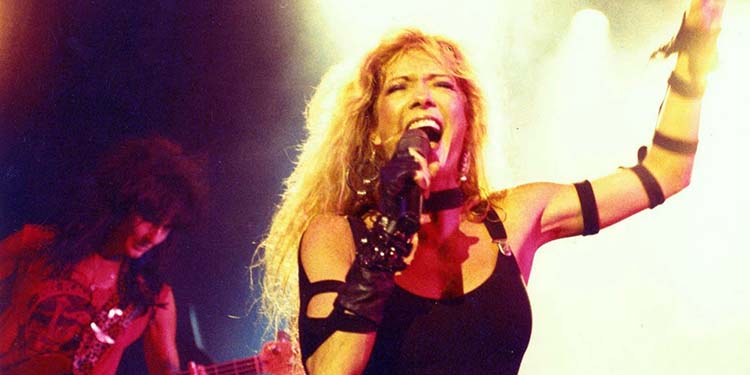 Emi Canyn was best known for being the second ex-wife of Mötley Crüe guitarist Mick Mars. She has worked in back vocals for the band and has links to other bands including Canon, She Roc, and Alice N Thunderland. The Washington native was married to Mars for four years before the pair divorced in 1994. Emi died at the age of 62, more than two decades after her divorce.

Emi Canyn was born in Tacoma, Washington United States of America (USA), on December 5, 1954, to now-deceased parents Floyd Schmdit and Eleanor Schmidt. Emi Jo Schmidt was her given name when she was born. She grew up with seven other siblings. She had four brothers named Kenneth, Rob, H. Douglas, and Jon Schmidt and three sisters whose names are Barbara Reines, Jeri Ovekcha, and Joan McMahan. Joan has also passed away.

Emi’s nationality was American and she was of White ethnicity.

She was a very tall lady with a slimly built body. She stood at a height of 6 feet 2 inches or 1.89 m. Her body measurements were never disclosed to the public. Emi had blonde hair and the color of her eyes was brown.

She studied at Mount Tahoma High School. She graduated from high school in the year 1973. After the graduation of her high school, she relocated to Los Angeles in pursuit of a singing career in the 70s.

Canyn’s career took off when she moved to Los Angeles and joined the bands’ Canon, She Roc, and Alice N Thunderland, all of which she loved. She also sang backup vocals for her ex-husband Mick Mars’ band Mötley Crüe while on tour.

Emi Canyn’s friendship with Mick Mars, lead guitarist and co-founder of the rock band Mötley Crüe, drew a lot of media attention towards her. They also performed as a band together, with her as the backup singer.

On September 29, 1990, the former couple married and stayed together for four years. They divorced peacefully in May 1994, with neither party revealing the reason for their breakup. They didn’t have any children as a couple.

However, soon after his divorce from Emi, the American musician started dating Robbie Mantooth, with whom he was in a 10-year relationship from 1995 to 2004. Prior to that, he was married to Sharon (now ex-wife) and had two children: Les Paul Deal (b.1971) and Stormy Deal (b. September 4, 1973).

Aside from Mars, Canyn had a romantic relationship with Marc Nelson, her drummer partner. Furthermore, she was linked to Chet Thompson and Paul Taylor (who died in 2018 at the age of 88), but no substantial evidence of their relationship was ever found.

What was Emi Canyn’s Net Worth?

Emi Canyn had a net worth in the six figures at the time of her death in 2017, but the exact number has yet to be revealed. It is estimated that Emi had a net worth of around $1 Million.

In March 2021, Mick, who is 69 years old, has a net worth of $70 million. His band Motley Crue released nine studio albums, selling over 75 million worldwide and 25 million in the United States.

Emi passed away on February 25, 2017, at her Lacey, Washington home. At the time of her death, she was 62 years old. Her parents and a sister named Joan died before her, and she is survived by her seven siblings.

A memorial service was held in the memory of Emi Canyn at The Church of Jesus Christ of Latter-day Saints on April 15, 2017. However, no exact information about the cause of her death has been released to date, though reports believe it was a natural death.