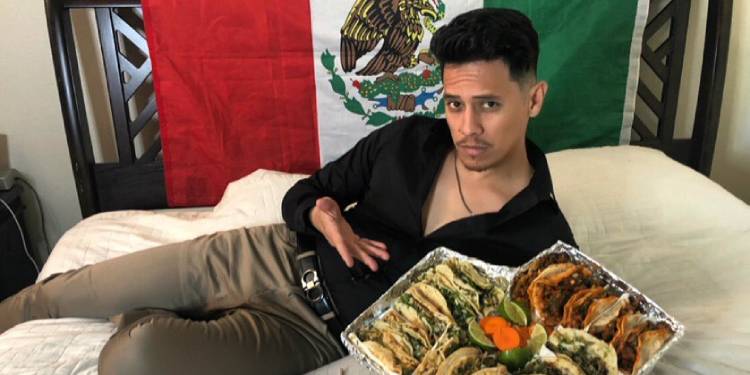 Eric Ochoa is an American YouTuber and a social media personality. He is well-known in the entertainment industry through his YouTube videos. He is also an actor, and he also has his adventure series, ‘Cholo.’

Please stick with us to know more about the YouTuber and the journey of his life.

Ochoa was born on 27 January 1986, and he is a native of Paramount, California, the United States of America. Unfortunately, he has not talked much about the identity details of his parents at the moment. Talking about his siblings, he grew up alongside his brothers, Jeffrey Ochoa and David Ochoa.

Furthermore, he also has a sister, and her name is Cristilline Ochoa. Besides this, he is currently 35 years old with the zodiac sign of Aquarius.

Eric Ochoa stands at 5 feet and 11 inches (1.80m/180cm) tall, and he weighs around 72kg (158lbs). Unfortunately, he has not revealed his exact body measurements to the public. However, we are aware of the fact that he likes working out and hitting the gym.

Ochoa is a social media personality and a famous YouTuber. He began his YouTube channel (SUPEReeeGO) on 4 January 2008. He has since entertained over 3.4 million subscribers. His viewers love watching his content, resulting in the YouTuber gathering over 730 million views on his channel.

He uploaded his first video of the channel on 13 January 2008. The title of the video is ’20 Impressionalities.’ It is a comedy video, and he does 20 different impressions of different actors and their iconic movie scenes.

Eric introduced the character of eGO 13 years earlier, and he has since been playing a role in his YouTube series, ‘Cholo Adventure Series.’ Likewise, he also has a lot of other series on YouTube like the ‘Jealous Boyfriend Series’ and the ‘Cholas Bailando Cumbia Series.’

However, he has earned a lot of fame and name through the portrayal of eGO from ‘Cholo Adventure Series.’ He began the series in 2008, and the show has since aired 40 episodes in total. In addition to this, some of his other notable works include series and miniseries like ‘Single By 30‘ (2016) and ‘Pedro’s Auto‘ (2013-2014).

Apart from acting, Eric is also a talented content creator. He likes creating fun and comedy content on his YouTube channel. Furthermore, he also has a lot of vlogs and funny challenge videos. In addition to this, he likes featuring his friends and family members on his videos and creating fun content.

Eric is active on social media platforms. His official Instagram account (@supereeego) has over 577 thousand followers. Likewise, he is also a TikTok star (@SUPEReeeGO). He has over 575 thousand followers who have showered him over 9.5 million likes on his videos. He likes sharing videos from his daily life as well as from his gym on the platform. He also does a lot of funny videos as well as lip-syncing videos.

In addition to this, he has over 119 thousand followers on his Twitter account (@SupereeeGO). Furthermore, he is also active on Facebook (@CholoAdventures), where over 773 thousand people love keeping up to date with his stories.

Eric Ochoa was previously in a relationship with his ex-girlfriend, and her name is Veronica. She made a lot of appearances on his videos. Unfortunately, things did not work out between them, and they went their separate ways in 2018.

Following their separation, Eric started dating his current girlfriend, Vanessa Smalls. He has not shared any information regarding his marriage, but we know that he has two children with Vanessa. Their names are Ezekiel Ochoa and Cruz Ochoa.

Eric Ochoa has featured his kids a lot on his YouTube videos. He first mentioned his twins when he revealed that they were expecting a baby in 2019. They welcomed their little bundle of joy on 2 February 2020.

In addition to this, he also announced through his Instagram that he and Vanessa would be marrying soon as they shared a picture showing a ring in her hand. He captioned the photo, “Future Mrs. Ochoa.”

Net Worth of Eric Ochoa

Eric makes a handsome amount of fortune as a content creator. In addition to this, he has also worked a lot as an actor. Furthermore, he also has merchandise that his fans can purchase through his official store.

His merchandise offers a wide variety of clothing, including t-shirts and hoodies. He has an estimated net worth of around $3 million as of 2021.