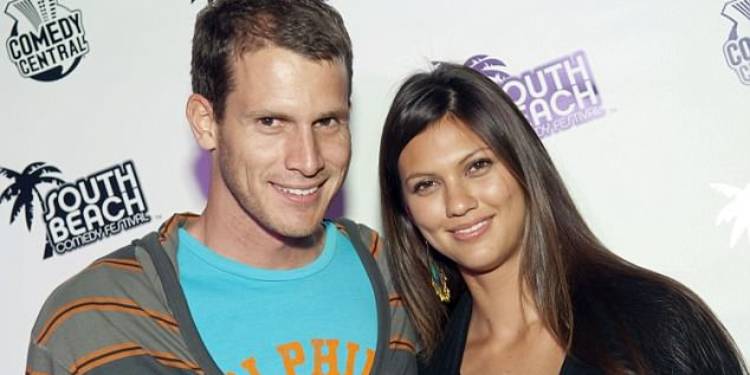 Carly Hallam is a writer and actress by profession. She is well-known in the media for her contribution as a writer and actress for Daniel Tosh’s television series, ‘Tosh.0.’ Daniel Tosh’s full name is Daniel Dwight Tosh. He is an American comedian, host, actor, writer, and producer by profession. Notably, he is the handsome husband of Carly Hallam. The husband and wife duo have worked together on several occasions and have been together since 2016.

Daniel has been in the spotlight for a long time, so people know what he does and who he is. However, not much information has been available about his wife, Carly. So, please stick with us to know more about Carly’s life and her untold facts.

Daniel and Carly’s marriage was a secret.

Carly Hallam and Daniel Tosh tied their knots on 15 April 2016. They were very secretive about their wedding as they did it behind the curtains and away from the media’s attention. They even stayed away from posting about their big day on social media. However, we are aware that their marriage took place in an undisclosed location in Malibu, California. Since then, they have been together. Before Daniel’s relationship with Carly, he was dating Megan Abrigo, a model. The New York Times covered a story with their relationship details back in the year 2009.

A little about Carly Hallem

Born on the auspicious occasion of Valentine’s Day in 1985, Carly is currently 36 years old with the zodiac sign of Aquarius. While most of the details regarding her early life, including her childhood, upbringing, and parents, remain a mystery, we are aware that she is currently working as an actress and a writer. She has made a remarkable contribution to her husband’s television series, ‘Tosh.0’ by appearing as an actress and writer on numerous occasions. In addition to this, she has also helped in the script of the American police procedural sitcom ‘Brooklyn Nine-Nine.’ Furthermore, she held the position of an executive story editor for 23 episodes of the show.

Carly Hallem has written several jokes for her husband

While Daniel jokes and makes people laugh on-stage, Carly has written many of his jokes and comedies. She began writing for his program in 2012 and was in the writing business till 2015. She worked as the writer for a total of 86 episodes from 2012 to 2015. In addition to this, she also made occasional appearances on the program.

Carly and Daniel’s relationship is private.

Daniel and Carly are very private when it comes to talking about their relationship. Their marriage took place in a private ceremony, but that is all we know about their relationship. They prefer to keep their personal life as personal as possible. They do not have kids together, and they barely click pictures together. All we know is that they began dating back in the year 2010, according to Dailymail.