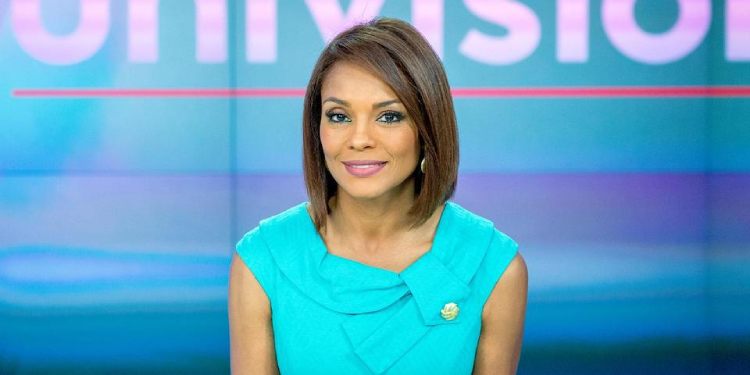 Ilia Calderón is a Colombian journalist. She is famous for working as the anchorwoman for the American Spanish language television network Univision. In addition, she hosts the evening newscast for the channel. Please stick with us to know more about Ilia’s life journey and details.

Who is Ilia Calderón?

Ilia Calderón’s full name is Ilia Calderón Chamat. She was born on 15 May 1972 in Chocó, Western Columbia. She has not disclosed the identity details of her parents. Likewise, we can also not determine if she has siblings or not because she has not talked about her siblings either. In addition, she is 49 years old, and her zodiac sign is Taurus.

Ilia Calderón holds a Colombian nationality, and she belongs to mixed ethnicity. She descends from Latin and African ancestry through her parents’ side and is an Afro-Latina. Besides this, she has not shared the details about her religious views and practices at the moment.

Ilia stands at the height of 5 feet and 9 inches (1.75m/175cm) tall, but she has not shared her exact weight. In addition to this, her precise body measurements are also a mystery. She, however, appears to have a slim body size, judging by her looks. Furthermore, her eyes are dark brown, and her hair is also dark brown.

You might want to check out Juana Manuela Marroquin Santos.

Ilia Calderón has not talked much about her schooling years at the moment. Talking about her further education, she studied at the University of Antioquia. She completed her education and with a major in Social Work.

Ilia is currently married to her husband, and his name is Eugene Jang. He is a physical therapist by profession. Their first meeting took place in Miami when a mutual friend introduced them to each other. Since then, they have been together. The whereabouts of their marriage remain a mystery, but we do know that in 2009, they welcomed a daughter from their wedding. Her name is Anna, and the couple is living happily together.

In an interview conducted by NBC News, Calderón talked about how she fears nothing when confronting racism. However, she mentioned her ethnicity and spoke about how she became a victim when the Ku Klux Klan leader called her the N-word. In addition to this, he also called her a mongrel and also threatened her by saying that he will “burn her out of his property.”

This did not scare Ilia in any way but instead provided her with an opportunity to speak against racism today. She mentioned that he overwhelmed her with such words of hatred in front of the camera crew. This brought her in the spotlight as many began seeing her as the first-ever Afro-Latina to gain such popularity.

Calderón began working immediately after completing her education. She has appeared on numerous news broadcasts for the Colombian regional public channel, Teleantioquia. Following this, she began working for the national television channel, Noticiero CM&. After working there for over three years, she bid farewell and carried on with her career with Telemundo, an American Spanish language channel. She used to host the weekend show for the channel and a morning show called ‘Cada Dia con Maria Antonieta.’

Later in 2009, she replaced Fernando del Rincon in Primer Impacto as the show host of the weekend edition after they fired him. However, her success did not stop there as she went on to work as a co-anchor for the late evening news show, ‘Noticiero Univision Edicion Nocturna.’ As of now, she is currently working as the co-host of the Noticiero Univision. She hosts the evening newscast alongside her fellow anchor, Jorge Ramos.

Ilia Calderón earns from her professional career as a journalist and an anchorwoman. She has undoubtedly managed to make a handsome amount of fortune throughout her career. As of 2021, she has an estimated net worth of around $400,000 to approximately $500,000. In addition, she earns roughly $31,200 to $89,718 on an annual basis.