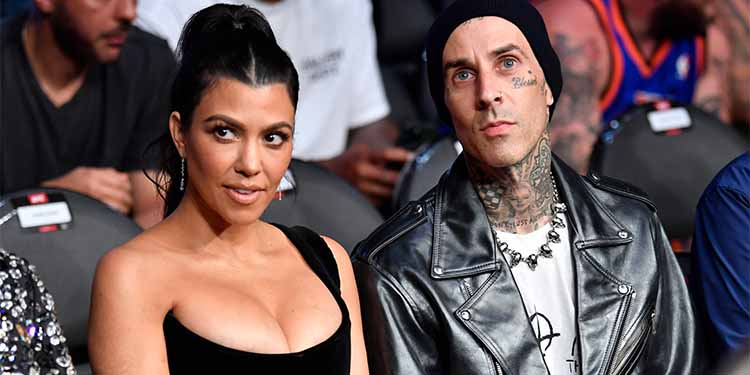 The Kardashians are always making the news, either with their life events or their shows and this time, it’s the eldest sister of the bunch, Kourtney, who has put social media on meltdown with not one but two rumors that are spreading hot.

DOUBLE RUMORS AT ONCE

After spending a weekend full of snaps and stories with her partner Travis Barker, rumors are surfacing that the couple has secretly tied knots and is expecting a baby together.

Kourtney Kardashian has been extremely snug with Barker since the two went public about their relationship earlier this year. It is evident that the two can’t keep their hands off each other, which has led some fans to wonder if they have taken things to the next level.

While neither Kourtney nor Travis have responded to the baby rumor, the Kardashian, who is already a mother of three seems to be on the way to give birth to her fourth child.

The rumor started to spread when Travis Barker was seen rubbing Kourtney’s belly in Las Vegas while they were there to attend a UFC event.

Although no pregnancy bump was visible in the footage released, the couple left everyone even more confused when Barker posted a picture on Instagram with Kourtney, where the couple is seen playing piano, in black and white, a significance to family life.

Earlier this year, Kourtney had disclosed that she had frozen her eggs years ago as a precaution if she ever decided to have more children in the future.

“I really got talked into it. I was like, ‘OK, whatever, I’ll do it one time since everyone else is doing it. I might as well,'” said the Kardashian.

Khloé Kardashian said her Lamar Odom divorce ‘had to happen’ – Why did she say that?

Apart from the baby rumor, there is another big news that has been fueling the netizens, with many fans speculating that the couple might have actually gotten secretly married in a chapel in Las Vegas.

Prior to the couple’s trip to Las Vegas, Kourtney was seen in a photograph wearing a Minnie Mouse bridal veil in Disneyland. Both Barker and her children, too, were present with the couple on the trip, and social media is going crazy thinking that it could all be a pre-wedding celebration.

SUBTLE HINTS DROPPED HERE AND THERE

After Kourtney posted snaps with Barker from Las Vegas, her hairstylist seemed to drop a few hints as to the couple’s recent update suggesting that the couple might have, in fact, performed a secret wedding in Vegas.

“NOWWW I understand why ppl tie the knot in Vegas. There’s nothing like love AND a good time,” the hairstylist wrote as the caption, ending the post with a series of emojis of a chapel, a crying face, and some hearts.

To make things more certain, Barker’s daughter Alabama reposted Kourtney’s photos with the caption “So happy for you guys.” as her story., hinting to the fans as a congratulation post to her father and her would-be stepmom.

The baby rumors, on the other hand, are not a new thing for the eldest Kardashian girl.

When rumors surfaced about her being pregnant back in 2020, she shut the media outlets by saying that it was the way her body looked when she gained a few pounds.

“This is me when I have a few extra pounds on, and I actually love it,” Kardashian said in 2020. “I have given birth three amazing times, and this is the shape of my body.”, said Kourtney.

At 42 years of age and already a mother of three, it is natural that Kourtney can actually boast some stomach rolls that the fans might be hyping about without proper intent.

Maybe we will just have to wait for an official statement from the couple itself to find out.