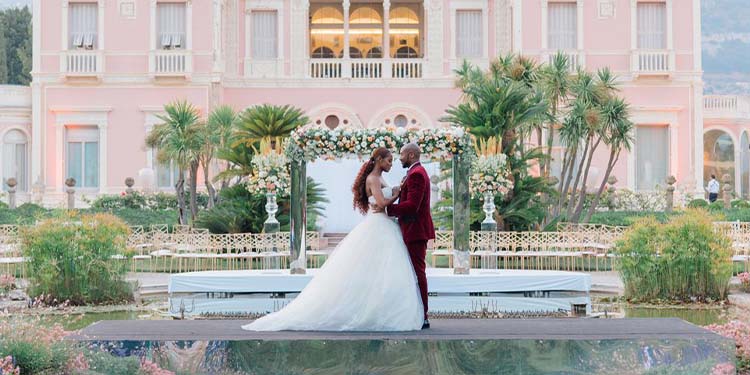 With the final season of Insecure done with shooting and all the pre-production work, Issa Rae, the American actress who plays the lead on the show, has finally decided to give priority to her personal life and took a considerable step forward when she decided to get married.

On Monday, July 26, the 36-year-old actress declared by releasing photographs that she had married her long-term boyfriend and Senegalese businessman Louis Diame in a secret marriage ceremony, in the most sarcastic way that only she can pull off.

Getting a dig at her close friends who were her bridesmaids, she posted: “My girls came to help me, but they all coincidentally had on the same dress! They were sooooo embarrassed.” The comedian actress didn’t even spare her newly-wed partner for life when she posted a picture with Daime with a caption, “Then I took a few flicks with Somebody’s Husband.”

The couple got married in a super-secret wedding ceremony in Saint-Jean-Cap-Ferrat in Southeastern France on the Mediterranean Coast, where only her closest friends and family were invited. The media and paparazzi had no idea she was getting married in France until she released the pictures herself. The beautiful actress, 36, wore a strapless Vera Wang gown with a sweetheart neckline while the groom was suited in a dazzling red Dolce & Gabanna.

The news of the couple’s engagement had surfaced when in 2019, Rae was covered in ESSENCE magazine wearing her engagement ring. Although she had not mentioned anything about it, it was later confirmed

by her brother Lamine Diop who heaped praises of his future brother-in-law Diame and shared his excitement about his sister’s future with him.

“They did it around the holidays,” he said in an interview with the US Weekley back in April 2019. “She’s so low-key too — for real! I found out, like, a couple of days later, so we’re just going to let her lead the way,” he added.

“He’s just a good guy, man. He’s just a cool guy,” he said, praising Daime. “They’ve been dating forever. He’s already been like a brother to me. Family ties at all the family events and dinners, Christmas, Thanksgiving.”, Diop said, elaborating their strong family ties that had now grown over the years.

And to make things just perfect, Diame is now legally “family.” While Daime has previously appeared in red carpet events and galas with Rae, she has mentioned that she prefers to keep her relationship out of the spotlight.

“I just feel super protective of any relationship I’m in,” she said to Rolling Stone in 2021. “That’s come from observing and making fun of people over the years who broadcast the most intimate parts of their relationships and are left with egg on their face. I call them the ‘me and my boo’ people. Let me embarrass myself. Don’t let a ni**a embarrass you. That’s always been my focus.”, she added bluntly.

And it is great for them both that Diame certainly has been the supportive controversy-free partner in the background that Rae needs in her life.

WHO IS RAE’S HUSBAND?

Louis Diame is an American national of Senegalese origin who is identified as a businessman. He is an independent investment banker who works in Greater Los Angeles, California.

Since skyrocketing to global fame for her sharp, hilarious, sarcastic, and brutally honest portrayal of a millennial Black woman’s life experiences in today’s world on HBO’s Insecure, the actress and producer has managed to gain considerable attention. Having being nominated for the Golden Globe Awards for the best actress, Rae has also won the Black Reel Awards, NAMIC, and NAACP Image awards multiple times for her role in the show.

The fifth and final season of HBO’s Insecure is currently in the final stages of post-production and is set to release on cable in late 2021.