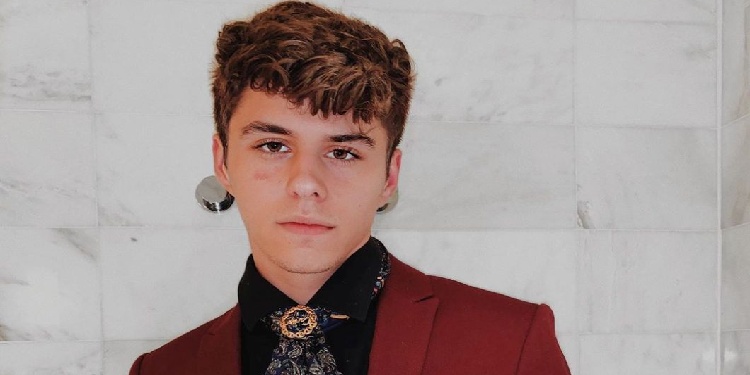 Jackson Krecioch is an American social media sensation. He is a well-known personality on social media platforms like TikTok, Instagram, and YouTube. He has well over a million followers on both Instagram and TikTok. In addition to this social media career, he is also a singer as he released his first-ever single back in 2018. Please stick with us to know more about the young self-taught talent.

Jackson Krecioch was born on 1 June 1998 in Wisconsin, the United States of America. His mother’s name is Jennifer Krecioch, and his father’s name is John Krecioch. Unfortunately, he has not shared any information about his parents’ profession at the moment. Sadly, he lost his father in an industrial accident back in 2013. His father injured himself badly in the accident and suffered a brain injury. Unfortunately, he could not recover from this injury, and he lost the battle two months later.

Jackson Krecioch holds an American nationality, and he belongs to white ethnicity. Moreover, he descends from North American ancestry. Besides this, he has not shared any information about his religious views and practices at the moment.

Jackson stands at the height of 6 feet and 2 inches (1.88m/188cm) tall, and he weighs around 70kg (154lbs). In addition to this, he has a slim body physique with a body measurement of 38-30-35 inches respectively. Moreover, he has a pair of dark brown eyes color with naturally dark brown hair color.

You might want to check out Jacob Jules Villere.

Jackson rose to prominence after he posted his pictures on his social media platforms. He attracted a lot of attention through his photographs. Jackson was already an Instagram star by 2015. He then made his way on YouTube in 2016 and then on TikTok. He has garnered a huge fan base as of now with a lot of followers. His fan base states that he has a really friendly and understanding attitude. He loves to listen to others and also communicates with others easily.

In addition to this, he is also an artist, and he loves to sketch. His YouTube channel mostly contains his vlogs and review videos as well as challenges. Moreover, he released his first-ever single in 2018. It is available for purchase on Apple music. He has released two songs, and their names are ‘Little Things’ and ‘Sleepless Nights.’

Jackson Krecioch is a recipient of the YouTube Silver Play Button Award. He received this award for crossing 100,000 subscribers on his YouTube channel.

Jackson is openly gay. He was previously in a romantic relationship with his spouse, and his name is Dylan Geick. He is also a social media influencer, just like Jackson. The fans adored and admired their fun-filled relationship. Sadly, the two of them announced their separation in 2018. Neither of them wanted to talk about the reason behind their separation. But they did mention that they choose to remain good friends even after their split.

Jackson was also in a brief relationship with his spouse, and his name is Aaron Fuller. He is also a social media influencer like Jackson and Dylan. Their relationship ended when they accused each other of cheating in their relationship. In addition to this, they also bashed each other for fame-leeching. The two of them also dragged personalities like Tana Mongeau and James Charles into their quarrel.

Jackson has appeared on the American talk show, ‘Dr. Phil‘. He tangled himself in a controversy against the talent manager of the TanaCon event, Michael Weist. He claimed that Michael took orders from Jackson’s fans but did not deliver the merchandise they paid for.

This created chaos between Jackson and his fans as they began questioning him for the products. He also asked Michael about this, but he assured him that the products would soon reach his fans, but they never did. When he investigated further, he found out that Michael was gobbling up the money from his fans.

Jackson earns from his professional career as a social media personality. In addition to this, he also sells his merchandise. He owns a clothing company called ‘Glorie.’ It sells mostly t-shirts, hoodies, jackets, caps, and more. According to estimates, there will be between $1 million and $5 million in his net worth by 2021.