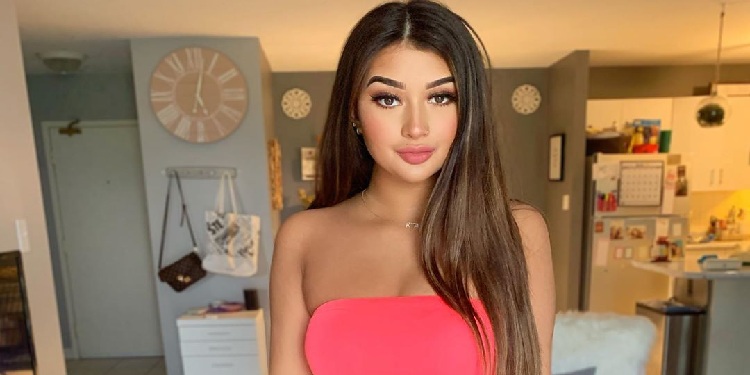 Karlee Steel is a Canadian YouTuber. She is well-known in the media for her YouTube channel, which consists mainly of pranks and trolling videos. She is a self-made star, and she has many followers and subscribers on her social media platforms. Please stick with us to know more about the talent.

Karlee Steel was born on 25 September 1998 in Windsor, Ontario, Canada. She has not shared the identity details of her parents at the moment. However, we do know that she grew up alongside her siblings. Their names are Kassidy Steel, Leah Steel, and Mya Steel. Besides this, she is currently 22 years old with the zodiac sign of Libra.

Karlee Steel holds Canadian nationality, and she belongs to white ethnicity. She has not shared any information about her ancestry at the moment. Additionally, she is Christian, and she practices Christianity as her religion.

Karlee Steel stands at the height of 5 feet and 7 inches (1.70m/170cm) tall, and she weighs around 55kg (121lbs). In addition to this, she has an hourglass-shaped body figure with a body measurement of 36-25-34 inches respectively. Moreover, she has a pair of beautiful brown eyes color with straight light brown hair color.

Karlee studied at the W. F. Herman Academy and completed her schooling from there. However, she has not shared any information about her higher education at the moment. Online sources claim that Steel is not currently pursuing any degree at the moment. She is now focusing on building her channel, but this lacks strong proof.

Karlee made her way on YouTube back on 13 January 2013. She developed an interest in having an online career at a very young age. Her parents completely supported her decision. Despite starting young, her videos attracted many audiences, which boosted her confidence as she was unsure whether she would be successful. Her channel mostly features prank videos and her makeup and party vlogs. Besides being popular on YouTube, she is also immensely popular on Instagram. She is the brand ambassador for the fashion company Fashion Nova.

Besides this, Karlee is also a singer, and she has released a total of four songs. Her songs are available on YouTube and Spotify. Its titles are ‘Text You First,’ ‘We’ll Be Fine,’ ‘If It Ain’t You,’ and ‘Give and Take.’.

Karlee is currently engaged to her boyfriend, and his name is Josh Bisschop. He is also a social media personality and singer like Karlee. He is well-known for his songs like ‘ITO,’ ‘Vibe Check,’ and ‘Notice.’ The two met in 2019 and have been together ever since. The two of them also collaborated and ran a common YouTube channel, Karlee & Josh. They often post daily vlogs and prank videos.

Aside from this, she hasn’t married anyone yet, nor has she had any children. Before this, Karlee was romantically involved with her ex-boyfriend, and his name is Conner Bobay. He is also a YouTuber like Karlee. They also ran a common YouTube channel together, but they separated as things did not go well.

Karlee has exchanged a few tweets with the American YouTuber and owner of the Dispo app David Dobrik. She has also released a funny podcast where she discusses how her friend has a crush on David. She states that he is her friend’s uncle and how her friend is crushing on him.

Karlee is not addicted to drugs of any kind. However, her name tangled with drugs when she uploaded videos where she stated that Steel used to sell weed when she was in the third grade. Steel also tells that Steel was so young that Steel did not realize that it was a weed plant. She even took the plant to her school without realizing what it was. She has another video where she talks about heroin. No, she did not consume heroin, but she mentioned that she went to a party and many alcohol and drugs were involved. It was her friend’s birthday party, and she tells that someone offered her heroin.

Karlee recently uploaded a video in November 2020 where she mentioned that she has a tumor in her liver. She stated that it started with stomach aches, and she consulted her family doctor, but he could not diagnose what caused the pain. When she went for an ultrasound, the reports revealed that she had a tumor. However, the doctor assured her that it did not mean cancer.

Karlee is a self-made artist, and she earns from her professional vlogging career. She also makes a handsome amount of fortune through brand endorsements. In addition to this, Steel also sells her merchandise on Depop for a reasonable price. According to the site, she has made almost 300 sales as of now. Approximately $700,000 is what her estimated net worth will be in 2021.