Kaycee Stroh is an American Actress, dancer, producer, and also a singer. Her act in the “High School Musical Franchise” as “Martha Cox.” Some of the other films she has played are “The Suite of Zack & Cody,” “Mother Goose Parade.”

In VH1, she was a contestant in the “Celebrity Fit Club.” She is not that popular as she has not played in movies and series. However, she is a StarPower Ambassador for the Starlight Children’s Foundation.

Kaycee Stroh was born on the 29th of May 1984 in Salt Lake City, Utah, America. She is the daughter of Cindy Stroh and Bruce Stroh. She has two older sisters as siblings, and both of them are dancers.

Kaycee Stroh is 5’2” tall, weighing 63 KG. Her body size is not mentioned, although she is fat and chubby.

She was born in The United States of America; therefore, she is an American by Nationality.

The Music video she has played is “Telephone,” directed by Jonas Akerlund and artist Lady Gaga back in 2010.

This is an American musical movie from 2008, written by Peter Barsocchini. The movie is directed by Kenny Ortega. This is the third and also the second last movie of the film series. The movie stars are Zac Efron, Vanessa Hudgens, Ashley Tisdale, Lucas Grabeel, Corbin Bleu, and Monique Coleman.

Kaycee Stroh has played the role of Martha Cox.

The movie Hannah Montana is a teen musical comedy-drama movie from 2009. The movie is based on Disney television series. The movie is directed by Peter Chelsom and written by Dan Berendsen. The movie stars are Miley Cyrus, Emily Osment, Jason Earles, Melora Hardin, Venessa Williams, Billy Ray Cyrus, and Kaycee Stroh.

Here, she is a non-speaking Cameo.

Martha Cox is a character as an East High School Student and a member of the national decathlon team in the “High School Musical” film series.

Kaycee took some dance students to the audition for High School Musical as she is a professional dance teacher. She got a chance to play Martha’s role as she was asked by the director “Kenny Ortega.”

She had not mentioned that she was in a relationship with others before she met Ben Higginson. She announced her engagement on May 24th, 2008, and then later, she was married to him on 9th January 2009.

The couple is blessed with a child, Zetta Lee Higginson, on 2013 May 8th, and the second child was Lettie Louise Higginson on October 15th, 2015.

They all live a happy life together.

What is Kaycee Stroh’s Net worth?

The net worth of Kaycee is expected to be around $300 Thousand as she has played in very few films, although she is a professional dance instructor. She prefers listening to “Blues,” her hobbies are Cooking and playing Carrom. She has been throughout the world, and she said that her favorite destination is Santorini and Bali, Indonesia. The favorite sport is Rugby as she likes watching it and prefers not to miss the important ones.

Kaycee Stroh has 318.6K followers on Instagram with 1K + posts in it. She is seen quite active in social media as she also works for the social works to help out the children. 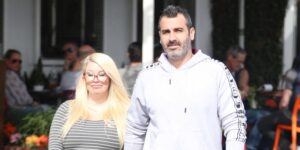