Koren Grieveson and Anne Burrell Called Off Their Wedding 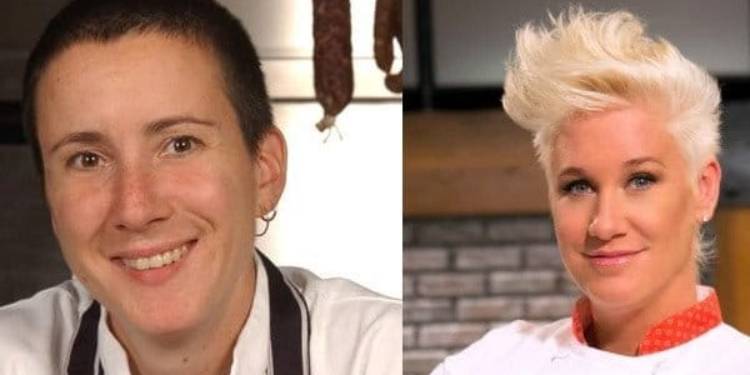 Anne Burrell is an American chef and a television personality. She is well-known in the industry as the American cooking television series ‘Secrets of a Restaurant Chef.’ In addition to this, she also landed a remarkable work in co-hosting the reality television series Worst Cooks in America.’ Furthermore, she has appeared on numerous other television shows and reality series like ‘Iron Chef America,’ ‘The Best Thing I Ever Ate,’ and ‘The Next Iron Chef.’

Likewise, Koren Grieveson is also a chef, just like Anne Burrell. However, she is immensely famous as Anne’s love interest than as a chef. She has worked under numerous top chefs like Keith Luce, Paul Kahan, and Suzy Cotton. She has had a quite successful career as a chef. She has won the 2008 Food and Wine Best New Chef Award and the 2010 James Beard Award. She also worked as an executive chef at the famous NYC Resto. Before her cooking career, she served in the US military for over eight years.

Anne and Koren began dating on an undisclosed date. However, their relationship came into the limelight in 2012 when the American author and television personality Edward Reese Allen publicly talked about their sexuality. Burrell then stated that her sexuality was never a secret.

After this incident took place, Anne tweeted, “Happy new year, everyone! Happy and healthy! An I’m engaged!!!!!!!!” She and Koren had engaged each other. The two of them were very excited about their wedding, and they also revealed that they would be marrying around 2018. They even planned that their marriage would take place in Vieques, Puerto Rico.

Following their engagement, the two love birds even lived together in New York. Unfortunately, they could not take their relationship past the engagement. The couple separated before tying their knots and went their separate ways for reasons unknown.

Where Are They Now?

Following their separation, Anne went on to date and marry her spouse, and his name is Stuart Claxton. After dating for around two years, he finally proposed to her on 21 April 2020, and she announced this exciting news to the public. On the other hand, Grieveson has chosen to stay away from the limelight. She leads a private life and avoids the media as much as possible.