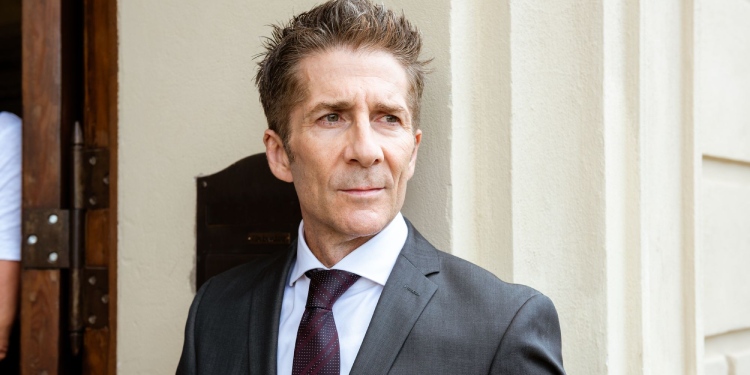 Leland Orser is an actor from the United States. From 2004 to 2009, he was best known for his role as Dr. Lucien Dubenko in the TV show ‘ER.’ In 1991, Orser made his first television appearance on Gabriel’s Fire.

Leland Orser was born on the 6th of August, 1960, in San Francisco, California, United States of America (USA). His full name is Leland Jones Orser. Leland has not disclosed any details about his parents or his siblings. However, we know that his parents raised him in Presidio Heights alongside four brothers.

Leland Orser’s nationality is American, and his ethnicity is White, and he is 60 years old.

Leland stands at an average height of 5 feet 8 inches or 1.73 m tall. His weight is 75 kg. Here at Celebsgraphy, we’ll keep you updated on his other body measurements as soon as possible.

In San Francisco, Leland attended the ‘Cathedral School for Boys.’

When Leland was in third grade, he had his first taste of acting. In a school production of ‘A Christmas Carol,’ he played Tiny Tim. Leland wanted to pursue acting after graduating from high school. He honed his acting skills at the ‘Drama Studio London,’ where he graduated in 1984.

In 1991, Orser made his acting debut in the ABC series ‘Gabriel’s Fire,’ playing Edward. Leland also made a cameo appearance on the NBC series ‘The Golden Girls’ in the same year. Then, with the 1993 mystery film ‘Cover Story,’ in which he played the leading role of Julian, he made the transition to the big screen.

In the Denzel Washington thriller The Bone Collector, he portrayed the antagonist Richard Thompson. He played a wounded man rescued by Kate Beckinsale’s character in Pearl Harbor in the year 2001. In the comic-turned-film Daredevil, he played Wesley in 2003. Finally, as the traumatized pilot of a crashed glider in Saving Private Ryan, he played him.

Orser has starred in the Star Trek franchise in various roles, including as a Changeling impersonating Romulan Colonel Look in the Star Trek: Deep Space Nine episode “The Die is Cast” and as a member of the Skrreean race in the episode “Sanctuary.” In the Star Trek: Voyager episode “Revulsion,” he also portrayed a murderous hologram.

Orser has had two marriages. In 1987, he married actress Roma Downey for the first time. The couple’s engagement, however, did not last long. In 1989, they divorced. In the year 2000, Orser married for the second time. He married Jeanne Tripplehorn, an actress. The pair met for the first time in Bad Things and are still together ever since.

In 2002, they starred together in the film My Brother’s Keeper. Together with their son, they have a happy married life. It’s also apparent in their long-term, mutually beneficial partnership. Later, the two starred in the film Morning.

The couple has a son together whose name is August Tripplehorn Orser.

Orser has amassed a sizable fortune as a result of his acting career. However, he’s been in the business for quite some time. From 2004 to 2009, he was best known for his role as Dr. Lucien Dubenko in the television series ER.

Seven, Escape from L.A., Independence Day, Alien: Resurrection, Saving Private Ryan, The Bone Collector, Pearl Harbor, Daredevil, Taken, Taken 2, and Taken 3 are only a few Orser’s film credits. Leland Orser is estimated to have a net worth of $ 6 million.