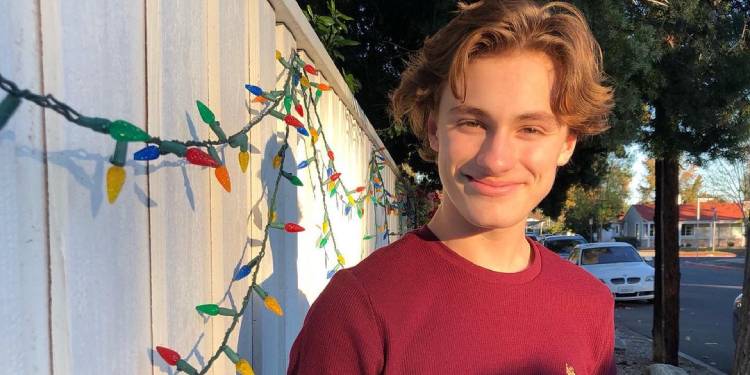 Logan Pepper is an American actor. He is best known in the entertainment industry for appearing as Cooper Bradford in American Housewife. In addition to this, he has also impressed the audience by appearing as Luca in another television series, Total Eclipse. Please stick with us to know more about the actor and the details of his life.

Logan Pepper was born on 25 June 2002 in Los Angeles, California, the United States of America. His mother’s name is Susannah Pepper, and his father’s name is Corey Pepper. Sadly, he has not revealed what his mother does for a living, but we know that his father is also in the acting industry. He is also an improv teacher, and he teaches at Lisa Picotte’s Young Actor Workspace. Talking about his siblings, he shared the love of his parents with his elder brother, and his name is Griffin Pepper. Apart from this, he is currently 19 years of age with the star sign of Cancer.

Logan Pepper is an American by nationality, and he belongs to the Caucasian ethnicity. However, he has not publicly spoken about the details of his ancestry. Talking about his religion, he is a Christian, and he practices Christianity as his religion. Unfortunately, there is no reliable information available regarding his educational background. Online sources claim that he must have completed his high school education, but there is no confirmation.

You might want to check out Isaak Presley from ‘Total Eclipse.’

Logan Pepper stands at 5 feet and 8 inches (1.72m/172cm) tall, and he weighs around 65kg (143lbs). While the actor has not shared his exact body measurements with the public, we can tell by looking at his pictures that he has a slim body figure. In addition to this, his eyes are brown, and so is his hair color.

Logan Pepper stepped into the world of entertainment in the year 2017. According to an interview with The Hofstra Chronicle, he started his acting career by taking acting classes with his father. As a result, he managed to grab roles in two different shows in his debut year. First, he appeared as himself in the music video for Disney Channel Stars: DuckTales Theme Song. Likewise, he also played the role of Jack in the short movie, Girls and Boys. Furthermore, he also played minor roles in short films like Quadratic Equations and Wolves.

The breakthrough moment of Logan’s professional career came in 2018 when he secured the recurring role of Luca. He played this role in the fantasy television series, Total Eclipse. Following this role, he also played a remarkable part of Dylan in the action, crime, drama television series NCIS. Moreover, he also played the impressive role of Cooper Bradford in the comedy television series American Housewife. He has been a recurring character in the series and has appeared for 36 episodes ever since. He appears in the show alongside actors like Miya Cech and Diedrich Bader.

Logan Pepper is currently single and not in a romantic relationship with anyone. Furthermore, he has also been very secretive when talking about his past relationship status. In addition to this, he has also not given out any hints through his social media accounts either. Because of this reason, we are unable to determine if he has dated someone in the past or not. Besides this, he has not married anyone yet, nor does he have any children.

Net Worth of Logan Pepper

Logan Pepper makes his fortune through his professional acting career. However, he has not disclosed the exact amount of fortune that he has garnered through his career. According to online sources, the actor’s net worth is around $250,000 to $300,000 as of 2022.