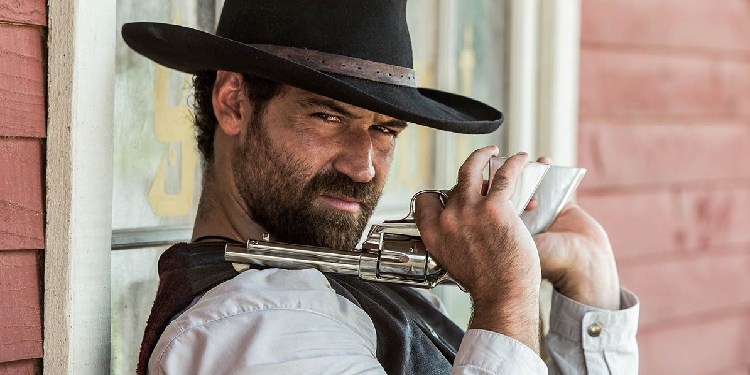 Manuel Garcia-Rulfo is a Mexican actor. He is well-known in the entertainment industry for portraying the role of Arturo in the 2014 American movie ‘Cake.’ He is also immensely popular for playing the role of Uncle Pedro in the 2013 drama movie ‘Bless Me, Ultima.’ Please stick with us to know more about the actor and his career.

Who is Manuel Garcia-Rulfo? Bio

Manuel’s full name is Manuel Garcia-Rulfo La Puente. He was born on 25 February 1981 in Guadalajara, Jalisco, Mexico. Currently, he does not know anything about his parents and siblings. However, we do know that his grandfather was a movie critic. However, his identity also remains behind the curtains. In addition to this, we also know that he moved from his hometown in Mexico to the United States when he was only 15 years old. He studied English and stayed with an American family for a long time. Besides this, he is currently 40 years old with the zodiac sign of Pisces.

Manuel holds an American nationality, and he belongs to mixed ethnicity. Moreover, he descends from Mexican ancestry. Besides this, he has not shared any information about his religious views and practices at the moment.

Manuel stands at the height of 5 feet and 10 inches (1.78m/178cm) tall, and he weighs around 70kg (154lbs). Additionally, he has an athletic body figure. Moreover, he has a pair of dark brown eyes color with dark brown hair color.

Manuel has not disclosed any information about his schooling years at the moment. However, we know that for further studies, he studied at Universidad del Valle de Atemajac. Moreover, he also took acting classes at the New York Film Academy and completed his education.

Manuel Garcia-Rulfo gave his debut performance in the movie industry in 2006. He played the role of Jose in the short movie ‘Valle de Lagrimas.’ The breakthrough moment of his career came in 2013 when he played the role of Uncle Pedro in the drama movie ‘Bless Me, Ultima.’ He landed another remarkable role later in 2014 with the role of Arturo in the drama movie ‘Cake’ alongside Jennifer Aniston and Adriana Barraza as the main cast. He has also contributed his talent to television.

He played the recurring role of Narciso Menendez for nine episodes of the American horror series, ‘From Dusk till Dawn: The Series.’ In addition to this, he will also be portraying the main role of Mickey Haller in the upcoming drama series, ‘The Lincoln Lawyer.’

Manuel won a nomination for the Gold Derby Awards’ Ensemble Cast Award in 2019. He shared this award with the cast members of the show. It consisted of Jon Bernthal, Carrie Coon, Viola Davis, and many more.

Manuel is currently single and not in a romantic relationship with anyone. He chooses to focus on his career rather than on a relationship. Likewise, he has also not shared any information about his past relationships at the moment. Besides this, he has not married anyone, nor does he have any children.

Manuel earns from his professional career as an actor. He has contributed his talent to several movies and series for over a decade now. Approximately $1.5 million is his net worth, according to estimates for the year 2021.