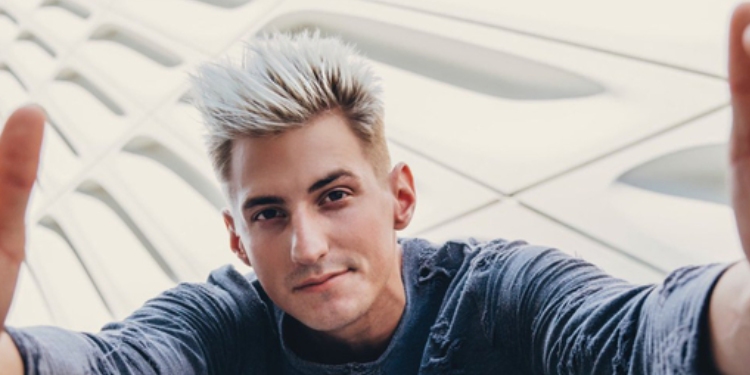 Mark Dohner is a YouTube and Instagram sensation from the United States. Dohner rose to prominence as a Vine comedian, teaming with internet celebrities such as Logan Paul, Jake Paul, and Curtis Lepore. In addition, Mark Dohner, a musician, released the song “No Love in LA” in 2020.

He was born in the state of Ohio on October 8, 1993. Similarly, raised in sunny California and now resides in Los Angeles, California. His mother, father, and two sisters, whom he sees daily at his Los Angeles home, are very connected. Mark is also attached to his grandma, who got afflicted with Alzheimer’s disease. This motivated him to initiate a ‘#Dohnation‘ fundraising drive for his fans to help families who have Alzheimer’s disease. However, when it comes to his nationality, he is an American citizen.

Mark Dohner is a gorgeous and attractive man. He is 5 Feet 8 Inches tall and weighs roughly 65 kg. In addition, Dohner has brown hair and brown eyes. However, he has colored his hair pink, blonde, and other colors.

Mark Dohner is a YouTuber, actor, Viner, and filmmaker from the United States. He has also amassed a sizable following on the network Instagram, where he has millions of followers. Similarly, he was and still is interested in social media. He first entered the social media realm with MySpace, and then when Facebook came up, he, like everyone else of his time, moved his profile there.

Similarly, from the minute he posted his first Vine video, he created an impression on viewers. “Saying ‘Merry Christmas’ to someone who doesn’t celebrate Christmas” was the title of his debut video. He also included his mates Logan Paul and Josh Peck. His initial video became viral instantly and got circulated by a significant number of people on social media.

Subsequently, he collaborated alongside Curtis Lepore and Brittany Furlan on Vine. He got quite successful on Vine, but he went on to other platforms when it got taken down. However, during the title period, his videos continued to rise in popularity, and he is among the most popular Viners on the website.

In March 2014, he launched YouTube channel Mark Dohner via Vine. His YouTube channel has daily vlogs, music videos, sketches, and other content. He has over 2.13 million followers on the site and around 306 million watches on his YouTube channel since about October 2020. Furthermore, his films have typical clickbait titles and primarily revolve around Mark’s day-to-day activities, roommates, and other relationships. To stay up with the times, he has frequently changed his material and adjusting to different social media trends.

He feels that the social media platforms themselves are in a ruthless industry and that those pursuing a career in social media must maintain with the ever-changing trends. He has a significant Instagram following in addition to his YouTube channel. In addition, he frequently posts pictures from his life, which he describes as a never-ending sequence of interesting activities..

Mark is also an eager cinematographer who thinks himself to be a talented performer. His passion for cinema originates from his experiences thus far, and he intends to work on films that tell human interest tales.

He negotiated a deal as a Curve Fragrances Brand Ambassador in April 2017 and began marketing the brand’s trademark men’s scent, Curve Black. Furthermore, he is a promising cinematographer who aspires to develop human interest films based on his life circumstances.

Mark Dohner is presently single, according to his dating status. In 2017, he started dating an Instagram celebrity, Kylie Rae Hall. However, the relationship ended in 2019. He did, nonetheless, have some lovely moments with her. He had a difficult time finding himself after his separation. However, over time, he has unquestionably improved.

Mark Dohner’s net worth is predicted to be between $750k and $1 million as of October 2020. Mark posts videos every day, giving visitors a glimpse into his interesting life. In addition, his large fan base on various social media platforms has allowed him to earn a lot of money from multiple sources.