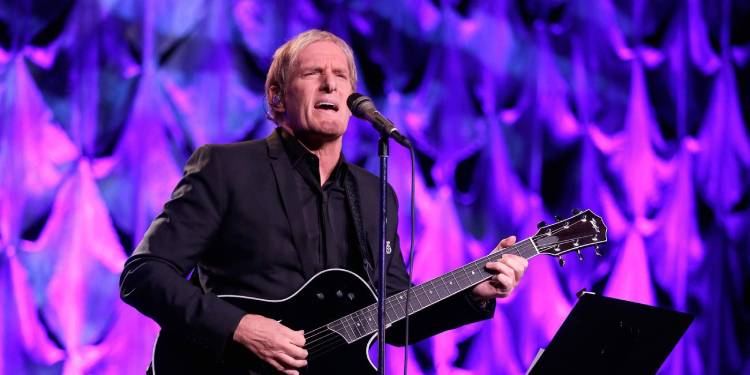 Michael Bolton’s actual name is Michael Bolotin. He is a two-time Grammy Award-winning American singer and songwriter by profession. He is a famous personality in the music industry, especially in the heavy metal and hard rock music genres. In addition to this, he is also famous for the lead vocals of the American rock band, Blackjack.

During Michael Bolton’s professional career, he has sold over 75 million records out of which eight of his albums were able to land themselves on the top 10 charts. In addition to this, he has also been able to land two of his singles on the top of Billboard charts. Talking about his songwriting career, he has written for numerous big names in the industry like Laura Branigan. He has helped Laura with songs like ‘How Am I Supposed to Live Without You’ and ‘I Found Somone.’

With such immense fame and remarkable works, fans love Bolton and his music. In addition to gaining fame and recognition through his music, people have also spotted the singer with numerous celebrities throughout his career. Please stick with us to know more about Bolton and the beautiful ladies he has been with.

Michael Bolton’s first known relationship was with the former American actress, Paula Barbieri. However, there is no exact information regarding how long they dated each other and how long their relationship lasted.

Maureen Bolton was Michael Bolton’s first known wife. The wedding bells rang for the couple back in 1975. Following their matrimony, they welcomed a total of three daughters together. All three daughters were born in a gap of two years between them. Their names are Isa Bolton, Holly Bolton, and Taryn Bolton. He also became a grandfather when his daughter Taryn gave birth to her children. As of now, he has six grandchildren through his daughters’ side. They all lie between the age group of 2 and 8 years old. Unfortunately, his marriage life with Maureen came to an end in the year 1990.

Cher is an American singer and actress. She is famous in the entertainment industry as the Goddess of Pop music. She is famous for her distinct contralto singing style. According to numerous sources, Cher and Bolton were also something of an item back in 1986. However, there is no exact confirmation and this claim exists only as a rumor. Bolton has written many songs for Cher and she has also recreated a lot of his songs.

Marla Maples is also a famous personality. She is an actress, producer, speaker, and model by profession. She is also famous as former President Donald Trump’s second wife. According to various sources, Bolton and Marla’s relationship sparked back in the year 1991. But it was for a brief moment as it ended in the same year.

After Bolton’s relationship with Marla Maples ended, he stole the spotlight once again when he dated the American actress, Brooke Shields. He began dating Shields in 1991 and their relationship last for around a year. The two of them went their separate ways in 1992. Likewise, in the same year, he was also somewhat an item with the former Argentine professional tennis player, Gabriela Sabatini. Their relationship was brief and they separated after dating for some time. Likewise, he also reportedly dated Teri Hatcher, an American actress in 1992. Their relationship was also a brief one as they parted ways in the same year after dating for some time.

Ashley Judd is an American actress by profession. Michael stayed away from relationships for a long time after his separation from Teri Hatcher. He then got along with Ashley in 1996. The pair dated for over a year but then parted ways in 1997.

Pamela Denise Anderson is a Canadian-American actress. She is not only famous as an actress but she is also famous as a model. She has made a lot of appearances in the men’s lifestyle and health magazine, Playboy. She was also the Playmate of the Month for the month of February in 1990. Pamela and Michael Bolton met for the first time in 2001. Their first meeting took place at a Bahamas-based party. But the two of them parted their ways in the same year.

Nicolette Sheridan and Michael Bolton met for the first time back in 1992. However, they began dating only in the year 2006. According to Sheridan herself, he proposed to her during the holidays in the Bahamas. She mentioned that it was a very sweet moment. She also posed nude with him for a charity ad. Sadly, the couple dated for two years and then separated.

Michael Bolton’s most recent relationship came in 2010 when he began dating Helene Fischer. She is a German singer, dancer, and television personality. The two of them began dating in the year 2010. They dated for over two years but then separated in the year 2012.