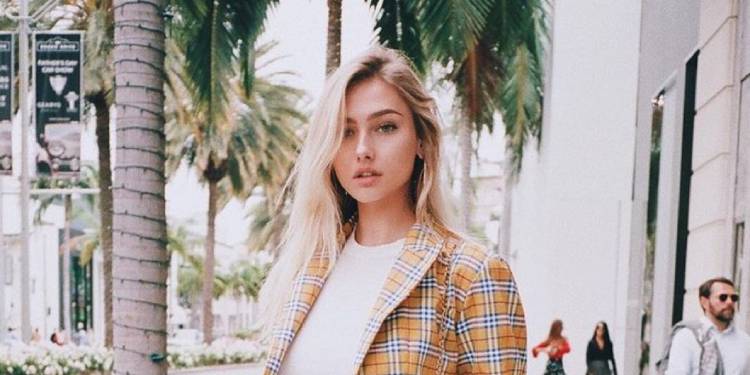 Molly O’Malia is a famous model and social media sensation. She is well-known in the media for involving herself in controversies with artists like Tyga and Bobo Norco. Please stick with us to know more about what happened between them and also more about her life.

Molly O’Malia was born on 22 May 2001 in Wilmington, Delaware, the United States of America. Her mother’s name is Anne O’Malia, but she has not shared her father’s name. Unfortunately, her parents parted ways in 2011, and her mother has been taking care of her. She had a very problematic childhood as her father was abusive towards her and her mother. She grew up alongside her sister, and her name is Christina O’Malia.

The year 2011 was a very tragic year for the family as yet another sad incident took place. Christina met with a car accident that severely injured her brain. Since then, Molly and her mother have been taking care of Christina.

Molly O’Malia is currently a student at Delaware State University. She has not talked much about her past educational background. Because of this reason, we are unable to determine the educational institution she attended and completed her high schooling from.

She holds an American nationality, and she belongs to the white ethnicity. Besides this, she has not talked much about her ancestry details at the moment. Talking about her religion, she is a Christian, and she practices Christianity as her religion. Moreover, she is currently 20 years old with the zodiac sign of Gemini.

Molly O’Malia stands at 5 feet and 6 inches (1.68m/168cm) tall, and she weighs around 55kg (121lbs). In addition to this, she has an hourglass-shaped body figure with a body measurement of 34-23-34 inches, respectively. Furthermore, her eyes are blue, and it matches perfectly with her blonde hair color.

Molly O’Malia is a social media sensation. She began her professional career as a model and began garnering a lot of followers on social media sites. She is also on YouTube, where she likes to post videos about her makeup routine. She has also done a question and answer session with her fans and also posted a cover song. However, there are not many videos available on her channel.

Likewise, she is also available on TikTok (@mollyomalia22) with over 132 thousand followers and 2 million likes. Furthermore, her YouTube channel (Molly O’Malia) has over 43 thousand subscribers.

Molly O’Malia seems to be in a romantic relationship with a person named Wesley Tucker. While she claims that they are just best friends, the pictures on her Instagram posts say otherwise. However, there is no exact information about the status of their relationship at the moment.

Before this, Molly involved herself in a lot of controversies. One such incident took place when she had a conversation with the famous American rapper Tyga. According to a report by BBC, her lawyer claimed that the rapper was in love with her, and he approached her first. After that, he used to text her and also FaceTime her every day. This was inappropriate as she was just 14 years of age at that time.

OK! magazine also published an article regarding this topic and used Molly’s picture to worsen matters. This created a lot of unwanted attention, and Molly filed a case asking for an apology by the magazine for using her picture without her permission.

She said that she has been getting a lot of negative comments because of her photo in the article. She demanded that the magazine apologize to her and stated that she publicly spoke because she did not want others to face the same problem. Molly also said that she never said anything about her and Tyga’s conversation to the magazine and wanted to know how they got hold of the information.

However, the magazine defended its actions by saying that the editors and writers put a lot of dedication and hard work into writing the article. They have not yet taken down the paper, and it is still available today. Molly caught the media’s attention yet again when she exchanged texts with the rapper Bobo Norco. However, this did not create many headlines like the one between her and Tyga.

Net Worth of Molly O’Malia

Molly O’Malia earns from her professional career as a social media personality. She has collaborated with several brands on social media platforms and has also been a part of several promotions.