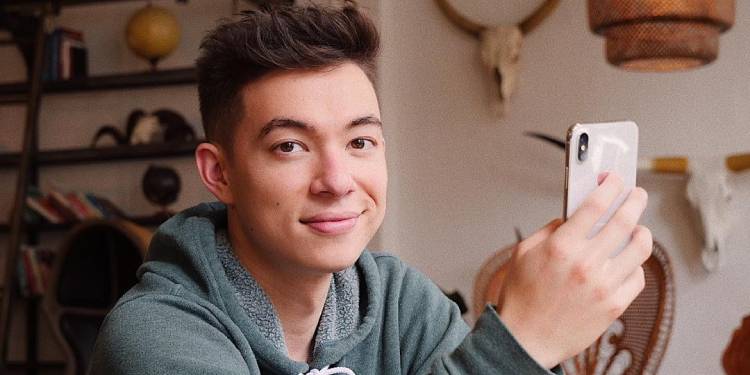 Motoki Maxted is a social media sensation. He is a well-known YouTuber, and he loves posting funny videos and clips on his channel. He holds millions of subscribers on his channel.

Moreover, he is also an actor, and he has made several on-screen appearances. Please stick with us to know more about the YouTuber and the details of his life.

Maxted was born in Akron, Ohio, the United States of America, on 3 December 1996. Unfortunately, he has not shared the identity details of his parents at the moment. However, he has featured them a lot in his videos.

Likewise, online sources claim that he has an elder sister, but the name of his elder sister is also currently a mystery. Besides this, he is currently 24 years old with the star sign of Sagittarius.

For his education, he enrolled at the Wauseon High School and completed his schooling-level education. Then, he joined Marymount University and completed his education with a TV and Film Production degree for further studies. He has been an active sportsperson since he was young. He is a talented soccer player, and he also loves running track.

Motoki Maxted stands at 5 feet and 9 inches (1.75m/175cm) tall, and he weighs around 72kg (159lbs). Apart from this, he has not disclosed his exact body measurements at the moment.

However, judging by his looks, we can tell that he has a slim and athletic body physique. Moreover, he has a set of dark brown eyes color and dark brown hair colors.

You might want to check out YouTuber, Tina Woods.

Motoki is a social media personality. He went viral after sharing a video called Another Car Ride with Motoki. In the video, he comedically lip-syncs and dances to various trending songs, and he has also featured his mother in the video.

However, she shows no interest in his dance which makes the video even more comedic. He began his journey on YouTube (Moretoki) on 27 April 2014. He has since garnered over 1.56 million subscribers on his channel, and his fans have showered him over 132 million views on his content.

Apart from being a social media personality, Motoki is also a talented actor. He gave his debut performance as an actor in the year 2016. Then, he appeared as Tyler and Cypher in the short television series Seven Bucks Digital Studios.

Following this, he played the same role in Millennials: The Musical. Another one of his most notable roles is the recurring role of Simon in the television series Attaway Appeal. Furthermore, he has also played the remarkable role of CIA Officer Dylan Tatsuno in the crime television series NCIS: Los Angeles.

Motoki has also won a lot of hearts through his impressive performances. Moreover, he is also a recipient of the Best Digital Reality Series Award through Reality Television Awards in 2020. He shared this award with Andrew Strauser, and Rebecca Donohue for his work in I Want My Stuff Back.

Furthermore, he is also available on Facebook (@motokimaxted) has over 4 million followers. He also loved sharing funny clips and videos through his official TikTok account (@motokimaxted).

You might want to check out YouTuber, Amie Johnson.

Maxted is currently single and not in a relationship with anyone at the moment. He is straight when it comes to talking about his sexual orientation. However, he is very secretive, so he does not let out much information about his personal life.

Because of this reason, we are unable to determine if he has dated someone in the past or not. Besides this, he has not married anyone at the moment, nor does he has any children.

Motoki earns a handsome amount of fortune through his career as a content creator. He is a popular YouTuber, and he has a lot of subscribers on his channel.