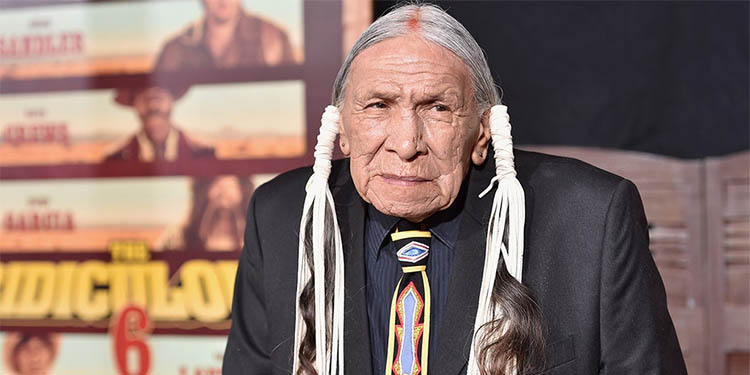 Saginaw Grant, one of the most prolific Native American actors known for roles in shows like “Breaking Bad” and “The Lone Ranger,” as well as for being the hereditary chief of the Sac & Fox Nation of Oklahoma, has died at the age of 85.

Grant’s publicist and a longtime friend Lani Carmichael said that Grant had died peacefully in his sleep because of natural causes on Wednesday at a private old-age care facility in Hollywood, California.

Born on July 20, 1936, in Pawnee, Oklahoma, he never forgot his roots that lied in his home state and his clan. Revered as one of the best character actors of all time, the Native American was known for his wise character portrayals across the screen.

“He loved both Oklahoma and L.A.,” said Lani Carmichael, Grant’s publicist and longtime friend. “He made his home here as an actor, but he never forgot his roots in Oklahoma. He remained a fan of the Sooner Nation.”

Beginning his acting career in the late 1980s, he played character roles in dozens of movies and TV shows over the last thirty years, including “The Lone Ranger,” “The World’s Fastest Indian,” and “Breaking Bad.” He also appeared in “Baywatch,” “My Name Is Earl,” “Saving Grace,” “American Horror Story,” “Shameless,” “Community,” “Workaholics,” and “Veep.”

Robert Downey Sr., Passed Away at 85

Grant was active on and off the screen in various activities. Besides being an active actor and TV personality, he was involved for years in the powwow circuit in California and also traveled extensively around the world to spread information about the Native American culture to various people.

Just like any wise Native American clan chief, “His motto in life was always respected one another and don’t talk about one another in a negative way.”, said Carmichael.

Apart from that, he was also a veteran of the United States Marine Corps who served during the Korean War. And as a result of that, Grant was very active in the Native American veterans’ community and participated for many years in the National Gathering of American Indian Veterans.

“He thought it was important for Native people to get recognized as veterans. He was kind and gentle, and very humble.”, said an organizer of the gathering programs.

TRIBUTES PAID FROM AROUND THE WORLD

The official Twitter handle for the U.S. Embassy in New Zealand & Consulate General in Auckland too shared their condolences for Grant on Thursday, who had visited New Zealand back in 2015 to participate in the pop culture convention “Armageddon Expo” and engaged with many local indigenous communities to learn and share experiences, culture, and traditions about one another.

“We are sad to hear of the passing of Saginaw Grantâ€¦It was an honor to host you in 2015 and to be part of your time here in Aotearoa. E te rangatira, journey well into the realm of your ancestors,” the Embassy tweeted.

ONE OF THE GREATS IN HOLLYWOOD

Grant will always be remembered as one of the greats of the American film industry because of his portrayal of Native American characters and the simplicity that he had on and off the camera. A lover of nature and all man-kind, Grant was a humble human being from head to toe and will be immensely missed by his fans and family worldwide.

A memorial will be held for Grant in the Los Angeles area, but details about the ceremony have not yet been finalized.