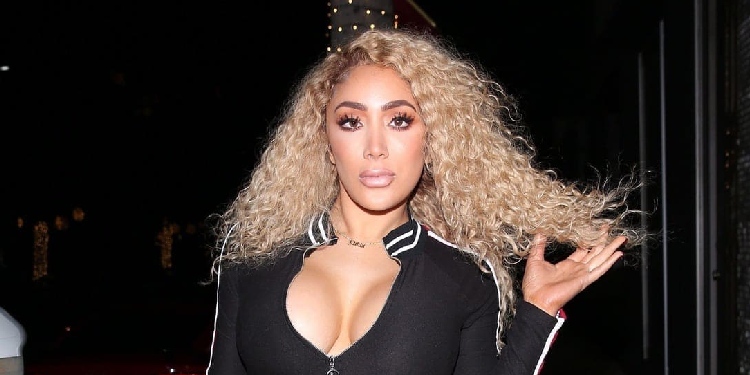 Nikki Mudarris is an American television personality famous for her role in VH1’s Love & Hip Hop: Hollywood. She is also a model and an entrepreneur. To learn more, detailed information about Nikki’s life is given below.

Nikki was born on June 28, 1990, and was raised in Los Angela, California. She is American by nationality, and she has mixed ethnicity, including Morrocan, Italian, and Arabic. Nikki is a Cancer as per his zodiac sign.

Nikki Mudarris was born to her father Abu Mudarris and mother, Marcelle Mudarris. She calls her father “the godfather of burlesque,” and her family has worked in the nightclub entertainment industry since the 1970s. Her father owned a strip club chain called The Body Shop.

Three venues are located in Los Angeles, and one is in Las Vegas. However, growing up, Nikki was skeptical of others because of the family’s network of strip clubs.

Therefore, she did not disclose these facts to her friends when she grew up but told them that her family was in real estate. As a result, not only does Nikki have a solid academic record, but she has also participated in school stage performances and other activities.

In education, Nikki Mudarris graduated from the University of Southern California and obtained her degree in Business Communication in 2014.

Nikki has two siblings. Her brother Anthony Omar Mudarris died of a drug overdose in California on June 13, 2015. She also has an older sister named Monique.

In 2014, Nikki Baby (aka Nikki Mudarris) landed a supporting role in “Love and Hip Hop: Hollywood.” The show is the third part of the reality show Love & Hip Hop, premiered on VH1 on September 15, 2014. The show records the lives of people associated with hip-hop music from the Hollywood area.

Her relationship with producer Mally Mall and her romantic love for rapper Lil Fizz were recorded in the first season of the series, and she was dating Lil Fizz until the second season. Then, at the last minute, Nikki decided to play a small role.

She eventually landed a lead role on the Season 3 drama, which began airing on VH1 on August 15, 2016, where she appeared bisexual. During this time, she established a polygamous relationship with Safaree Samuels and Rosa Acosta.

In seasons four and five, Niki was exposed and had an affair with Cisco Rosado and Solo Lucci but insisted she never slept with anyone. Nikki gradually gained recognition worldwide in the arts, and her fifth season premiered on July 23, 2018.

With the great success of “Love & Hip Hop: Hollywood,” Nikki, also considered one of the famous American bikini models, embarked on the entrepreneurial path and founded her own brand lingerie company, “Nude by Nikki.”

She is the president/ CEO of this company, which touts itself as “the online lingerie designer for luxurious, modern women.” It offers a variety of women’s products, including bras, thongs, long-sleeved jumpsuits, sleeveless jumpsuits, bathrobes, etc.

However, it also provides men’s collections, including boxer and briefs and limited editions of lip gloss. In addition, Nikki has been featured in several fashion magazines.

In addition to his efforts, Nikki also manages the family clubs of Hollywood and Las Vegas.

Due to her personal life and romantic relationship, Nikki was mainly involved in controversies. In 2012, she began dating Mally Mall. She made headlines in 2015 when Mall allegedly exposed her sex tape. As the video was leaked without Nikki’s knowledge or consent, she filed a warrant waiver against the Mall.

Nikki Mudarris earns from her career as she has her clothing line, and therefore she earns her income from her brand and earns from the sponsorship used on his Instagram account.

According to the different sources available on the net, the net worth of Joe Weller is estimated to be $700 Thousand.