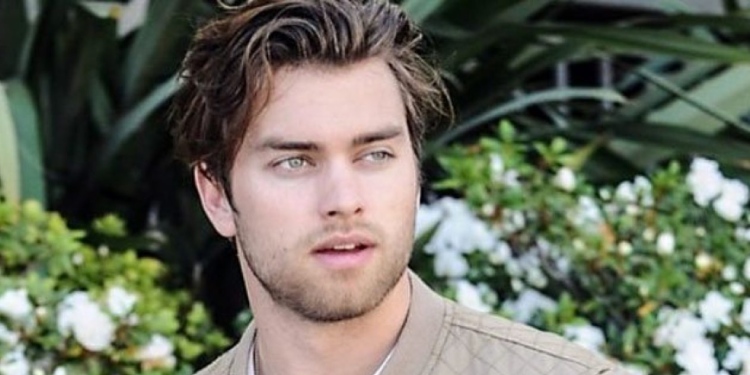 Pierson Fodé is a dashing American actor as well as a model. He is best known for his fantastic performance in the 2015 comedy/romance film Naomi and Ely’s No Kiss List (2015) and The Bold and the Beautiful (2015-2018) on CBS. His birth name is Pierson Dane Fode.

Fode was born on the 6th of November, 1991, in Moses Lake, Washington, United States of America (USA). He was born to Ron and Robin Fode. He grew up with two elder brothers named Preston and Payton and a younger sister named Pharron. He was brought up in a movie-loving environment which explains his love for acting.

Pierson Fode’s nationality is American, and his ethnicity is White. His zodiac sign is Scorpio.

Pierson has a muscular physique and stands tall at the height of 6 feet 2.5 inches or 1.89 m, and weighs 86 kg or 190 lbs. The color of Pierson’s hair is light brown, and the color of his eye is brown. Fode has not disclosed his chest size, biceps size, and waist size.

He earned an AA from college after graduating from high school. At the age of 13, he formed Pierced Productions, where he produced over 20 short films, wrote scripts, and acted in the lead roles. After graduating, he began his acting career at the age of 18.

Fode started as a model. He was signed to Seattle Talent until 2011 when he switched to Wilhelmina Models. He won numerous awards during his modeling career, including Star of the Year, Best Fashion Print Photos, and many others.

Fode made his acting debut in the year 2012  in the Nickelodeon sitcom iCarly, where he played the character of Todd alongside Jake Borelli, Miranda Cosgrove, Noah Munck, Jennette McCurdy, Nathan Kress, Nicole Anderson, Dylan Sprayberry, and Jerry Trainor in the series.

Fode has earned several accolades during his career, such as the YouTube Soap Opera Award in 2012 for his appearance as Jared Slater in Runways. He was also nominated for a Daytime Emmy Award for Outstanding Younger Actor in a Drama Series twice, in 2016 and 2017.

Pierson Fode’s love life has been in the news many times. He was rumored to be dating Sharna Burgess of Dancing With The Star fame at one point. He admitted in an interview that he has a crush on her and wants to make Sharna his girlfriend.

But Sharna has made clear that they are just good friends. Burges previously had a romantic relationship with Victoria Justice, an American actress, model, and singer best known for playing Lola Martinez in the popular TV series Zoey 101. However, Victoria and Pierson ended the relationship in 2015.

He was romantically linked to Katherine McNamara, an actress, and model, in 2016, but the supposed pair never confirmed the relationship. In the same year, he was linked to Ryan Newman after they collaborated on a photo shoot. Their chemistry was incredible, and people began to question their standing as just friends. Their relationship, however, was never authenticated.

Pierson is currently in a relationship with Saxon Sharbino, who is also an actress.

Fode has been in the acting business since he was a child, so we can believe he has accumulated a substantial net worth; however, his earnings have yet to be reported. However, according to some reports, his net worth is estimated to be more than $0.5 million.

The actor’s leading source of income comes from his appearances in films and television shows and his web roles in various runways.