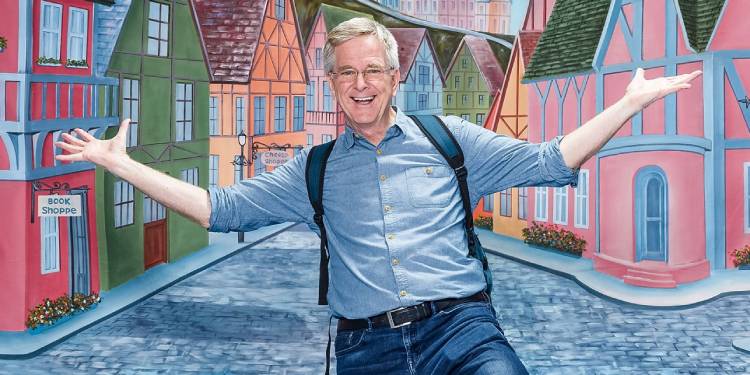 Rick Steves is a very famous American television personality, activist, and author. He is immensely popular for his travel writings which inspire people to travel more of the less-known and newer areas of the world. Likewise, he is famous for being the host of his travel documentary, ‘Rick Steves’ Europe.’ Please stick with us to know more about Rick’s biography and his life.

Rick Steves’s full name is Richard John Steves Jr. He was born on 10 May 1956 in Barstow, California, the United States of America. His mother’s name is June Erna Steves, and his father’s name is Richard John Steves. He has not shared his mother’s profession, but we do know that his father was a piano technician and a director for a high school band. He grew up alongside his sisters, and their names are Jan Steves and Linda Steves. Besides this, he is currently 66 years old with the zodiac sign of Taurus.

Rick Steves’ family owned a piano store named ‘Steves Sound of Music.’ The main job of this store was to tune and import pianos for their customers. To grab new opportunities for the store, his family traveled to Europe to view factories that made pianos. During his travel to Europe, he documents his experiences on the back of postcards even today.

Likewise, the family extended their tour and traveled to their relatives in Norway. It was during this time Rick realized the joy of traveling. He was curious to find out more about the other places on this planet. So, when he grew up, he decided to travel Europe alone, and this time too, he documented all of his experiences.

Rick Steves holds an American nationality, and he belongs to mixed ethnicity. He descends from Norwegian ancestry through his mother’s side. Talking about his religion, he is an active practitioner of Lutheran Christianity. It is a branch of Christianity that believes in the German professor of theology, Martin Luther.

Steves has hosted and written a lot of educational videos about his religion. Furthermore, he also acknowledges and supports Theology.

Talking about his educational background, Rick Steves is a well-educated person. However, he has not publicly mentioned the educational institution that he attended to complete his high schooling. He enrolled at the University of Washington, where he pursued business administration and European history as his major for further education. He completed his education and graduated in the year 1978.

Rick Steves stands at 6 feet (1.83m/183cm tall, and he weighs around 80kg (176lbs). He has not shared his exact body measurements now, but we can tell that he has an average body physique by his looks. In addition to this, his eyes are dark blue, and he has a mix of blonde and grey hair color which is probably due to aging.

You might want to check out if Rick Steves is Gay.

Being a travel writer, it is evident that Rick is interested in traveling to new places. Not only does he like traveling, but he also enjoys writing about his experiences. Furthermore, he also likes encouraging other people to travel to newer places that people do not know much about.

Everyone is aware of the tourist attractions, but he wants people to explore more about the lesser-known areas of the world. He also maintains a website where he likes posting about his travel. In addition to this, he also maintains travel blogs and helps people find the perfect destination for their holidays.

Rick began working when he was around 20 years of age. He used to teach travel classes at The Experimental College at the University of Washington. During his time as a teacher, he also worked as a tour guide and a piano teacher.

After teaching travel, he published his first-ever writing called ‘Europe Through the Back Door.’ Unlike others who copyright their writings right after publishing, he was the exact opposite. He mentioned in the book, “Anyone caught reprinting any material herein for any purpose whatsoever will be thanked profusely.”

Soon, Rick presented slides and provided consulting to people who were willing to travel. He ran his store called Rick Steves’ Europe Through the Back Door in his hometown. He was not a travel agency as he did not sell tickets. But he was more of a consultant who enjoyed guiding travelers.

Later, he started making on-screen appearances. He had his documentary called ‘Rick Steves’ Europe’ where he traveled to various locations of European cities and guided viewers through his videos.

Rick is active on social media platforms. His official Twitter account (@RickSteves) has over 151 thousand followers. Likewise, he has over 900 thousand followers with over 633 thousand likes on his official Facebook page (@ricksteves). Besides this, he does not have a verified Instagram account yet.

Rick was previously in a marital relationship with his ex-wife, and her name is Anne Steves. The couple welcomed two children from their marriage, and they are Andy Steves and Jackie Steves. Sadly, their relationship drifted apart in the year 2010.

After separating from Anne, he is currently dating his girlfriend, and her name is Shelly Bryan Wee. She is a Bishop at Northwest Washington Synod. While they do not have any children, Shelly has two children named Katie and Daniel from her previous relationship.

Net Worth of Rick Steves

Rick has been a prevalent and successful person in his field of work. He has managed to amass a handsome amount of fame and fortune through his on-screen and off-screen professions.

As of the year 2021, he has an estimated net worth that lies around $12 million.