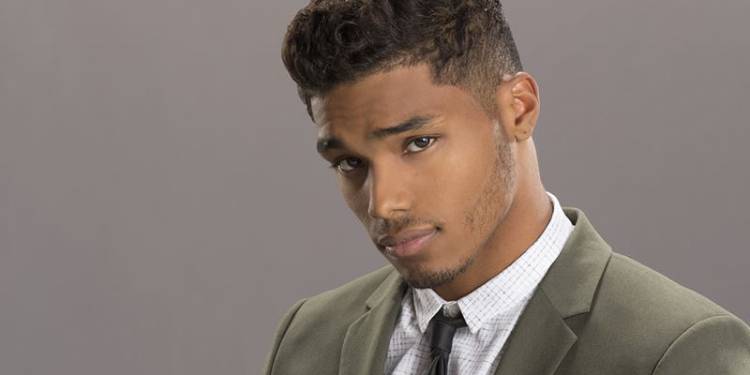 Rome Flynn is an American actor, a model as well as a musician. He is well-known in the entertainment industry for playing the role of Zende Forrester Dominguez. He portrayed this role in the American television soap opera, ‘The Bold and the Beautiful.’ The audience loved his performance, and he managed to impress everyone with this role. He also won a Daytime Emmy Award for this role just four years after his debut performance. Please stick with us to know more about the talented actor and the details of his life.

Rome Trumain Ceno Flynn is Rome Flynn’s full name. He was born on 25 November 1991 in Springfield, Illinois, the United States of America. His mother’s name is Nickey Alexander, and his father’s name is Rome Flynn Sr. He grew up alongside seven siblings. Unfortunately, he has not shared the names of all seven of them. But we do know that he has a sister named Love Flynn and a brother named Wisdom Flynn. Moreover, he is 29 years old and has the zodiac sign of Sagittarius.

Flynn studied at Lanphier High School and completed his high schooling education from there. He has been multi-talented since his high schooling years. He used to work as a model since those days and was also a good singer. Furthermore, he also used to play guitar and was also an active basketball player. Not only was he active, but he was also successful in the sport as he enrolled at the Benedictine University on a scholarship through basketball. A talent scout noticed his talents, and it was only then that he decided to move into the show business.

Rome Flynn holds an American nationality, and he belongs to mixed ethnicity. He descends from Afro-Cuban ancestry through his parents’ side. He is a Christian and practices Christianity as a religion. Rome Flynn stands at 6 feet (1.83m/183cm) tall, and he weighs around 74kg (162lbs). In addition to this, he has an athletic and well-maintained body figure. However, he has not shared the details concerning his exact body measurements at the moment. Furthermore, his eyes are dark brown, while his hair is black.

Rome gave his debut performance in the entertainment industry in the year 2013. First, he appeared as R.K. in a short video titled ‘The Haves and the Have Nots.’ Following this, he later went on to play the role of R.K. again, but this time in the series of the same name. However, the breakthrough moment of his career came in 2015 when he was able to land the central role of Zende Forrester Dominguez. He appeared in this role in the series ‘The Bold and the Beautiful’ for 190 episodes. He also won an Emmy for this role.

Rome has also landed a remarkable role in the series ‘How to Get Away with Murder from 2018 to 2020. He portrayed Gabriel Maddox in the series. Moreover, he has also been able to make notable appearances recently in 2021. He appeared in series like ‘Dear White People’ and ‘Raising Dion.’ He played the roles of David and Tevin Wakefield, respectively.

Rome was previously in a relationship with his ex-girlfriend, and her name is Molly Noriko Hurley. According to numerous online sources, they were in a live-in relationship during their days as a couple. The former lovebirds also welcomed a daughter from their relationship, and her name is Kimiko Flynn. However, their love story came to an end as they parted ways from each other. The parents share the custody of their daughter, according to various reports.

Upon separating from Molly, he went on to date Camia Marie. She is an American model and photographer by profession. Their relationship took place back during the year 2015. The former lovebirds used to share a lot of pictures while they were dating. However, the couple parted ways after staying together for over three years. Their separation remains a mystery.

Fans have speculated that there is a romantic spark between Rome and his ‘How to Get Away with Murder’ co-star, Aja Naomi King. However, this remains unconfirmed as neither Rome nor Aja has publicly talked about their relationship. Furthermore, he might be single at the moment as he has not posted any pictures of him with a girl on his social media.

Rome is the Outstanding Younger Actor recipient in a Drama Series Award from the Daytime Emmy Awards. He won this role for his work in ‘The Bold and the Beautiful’ in 2018. Apart from this, he has won a nomination for the Best Ensemble Cast Award from FirstGlance Film Festival, Philadelphia. He won this nomination alongside the cast members of the comedy-drama movie, ‘1/2 New Year’ in 2019.

Rome Flynn earns from his professional career as an actor. In addition to this, he also models for various agencies from time to time. Furthermore, he has also released songs like ‘Keep Me in Mind’ and ‘Brand New,’ which have garnered millions of streams on Spotify. As of the year 2021, he has an estimated net worth of around $500,000, according to online sources.

Rome Flynn is active on social media platforms. His official Facebook page (@RomeFlynn1) has over 100,000 likes with over 120,000 followers. In addition to this, he has over 1.2 million followers on his official Instagram account (@romeflynn). Furthermore, his official Twitter account (@RomeTrumain) has over 241 thousand followers.