Rose Leslie is a Scottish actress. Her leading debut came in 2009 in the television film New Town. She rose to fame as Ygritte in the HBO fantasy series Game of Thrones.

Rose Leslie is a Scottish actress who has been active in the industry since 2005. She won a Scottish BAFTA for her role in the film “New Town”.She is best known for her roles in “Downton Abbey” and “Game of Thrones”.

“Game of Thrones” took the world by storm when it aired. It lasted for eight seasons and its popularity grew with each season. Millions of people worldwide watched this fantasy drama series which was based on the series of fantasy novels written by R.R. Martin.

It was global phenomena and people watched it religiously. Many people jumped on the bandwagon and watched it to avoid being an outcast. Nevertheless, Game of Thrones thrived in it’s run from 2012 to 2019. It provided a massive career boost in the form of fame and opportunities to the people involved in the series. The actors were suddenly superstars and gained millions of fans worldwide. In the series, she played the role of Ygritte for 17 episodes from 2012 to 2014.

She also starred in the CBS All Access drama “The Good Fight”.

Rose Leslie’s full name is Rose Eleanor Arbuthnot-Leslie. Leslie was born to parents Sebastian Arbuthnot-Leslie and Candida Mary Sibyl “Candy” on the date of February 9, 1987, in Aberdeen, Scotland. She grew up in Lickleyhead Castle which is in Aberdeenshire. It is her family’s 15th century ancestral home. She lived there till the age of ten.

Leslie has four siblings. They are William, Sofia, Portia, and John. She studied at Rayne North School in Aberdeenshire. Later she moved to Somerset and studied in Millfield. After this, she moved to London to pursue her love for acting and drama. In London, she studied in the “London Academy of Music and Dramatic Art” for three years. 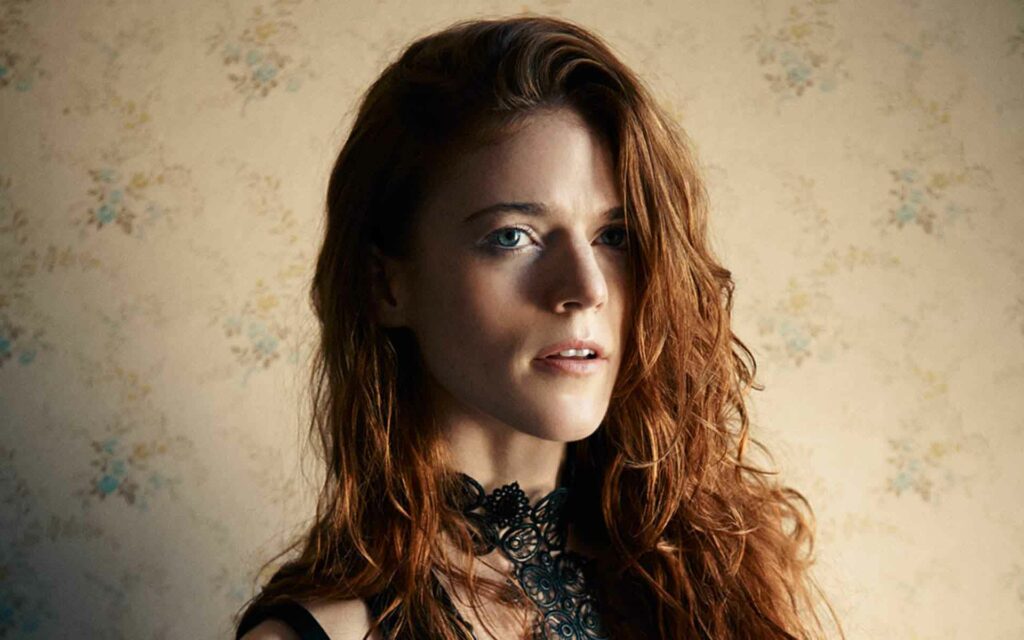 IN 2008, Rose Leslie first appeared on television via the role of “Kim” in an episode of “Banged Up Abroad”. Leslie was also the narrator for “The British Slave Trade: Abolition, Parliament, and People”.

In 2009, she played the role of Rhian in the TV film “New Town”. It was her first major lead role. For this, she even earned a Scottish NAFTA Award under the category “Best Acting Performance” given to new actors.

The breakthrough in her career came with the role of Gwen Dawson in the series “Downton Abbey” she appeared in 8 episodes of it in 2010 and 2015.

In 2011, she appeared in two episodes of “Case Histories” as Laura Wyre. The following year she had a minor role in an episode of “Vera” where she played the role of “Lena Holgate”.

In the year 2012, she also appeared in the film “Now Is Good” as the character Fiona.

She got one of the most prominent roles in her career in 2012 in the form of the character Ygritte in the series “Game of Thrones“. She appeared in 17 episodes of GOT for season 2, 3, and 4.

In 2014, she appeared on an episode of “Blandings” and an episode of “Utopia”. The same year, she also played the role of Sarah Farriner for 4 episodes of “The Great Fire”.

In 2016, she voiced “Red Riding Hood” in two episodes of “Revolting Rhymes”.

Rose Leslie also appeared in the films “The Last Dance” and “Morgan”. 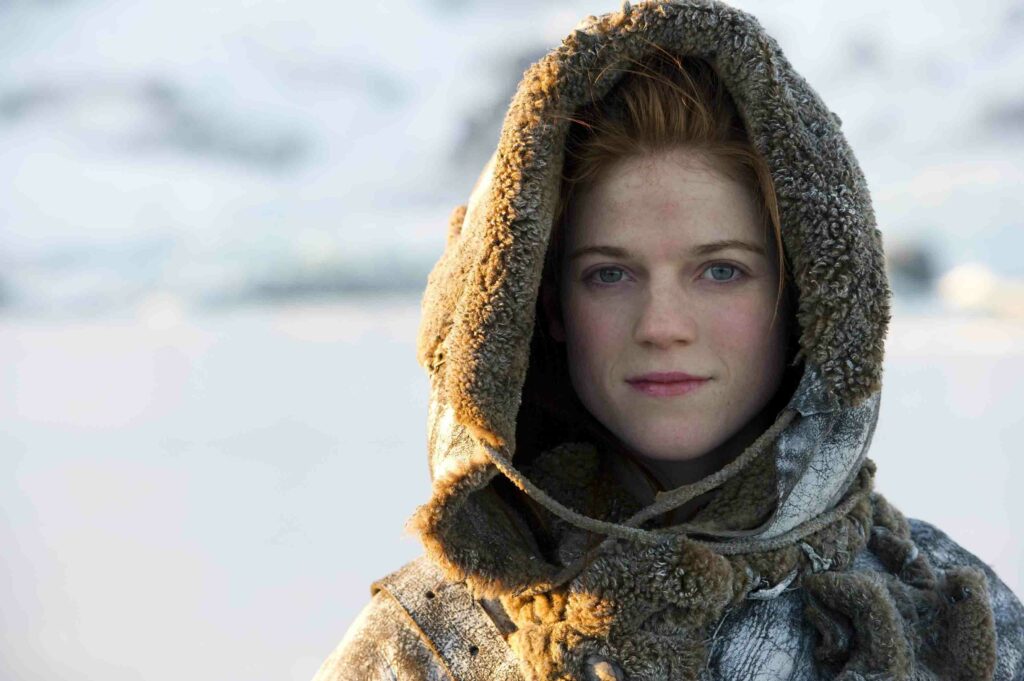 From 2017 to 2019 she appeared in the main role of “The Good Fight” as the character Maia Rindell.

In 2017, she voiced the female protagonist En, in the video-game titled “Echo”.

In the 2020 film “Death on the Nile”, she played the role of Louise. The film is under post-production as of September 2020.

She has made theatrical appearances in many plays from 2005 to 2015. Some of them are “Romeo and Juliet”, “Can-Can”, “The Caucasian Chalk Circle”, “Uncle Vanya” and “Antigone”.

In 2009, she won a British Academy Scotland New Talent Award for her performance in “New Town”.

In 2013, she was nominated for a Screen Actors Guild Award with the cast of “Game of Thrones”.

Rose lived in France for three years and is fluent in French. She loves Aberdeen as it is in the countryside and close to nature. She said she feels at peace when she’s in Aberdeen due to its tranquil environment with trees and nature.

Kit Harrington and Leslie married on the date of June 23, 2018. Kit Harrington played the role of Jon Snow in “Game of Thrones”. In the series, he was the love interest of Leslie’s character Ygritte.

Rose lives a very active life and she is interested in cooking, rock climbing, running, archery, skiing, and tennis. 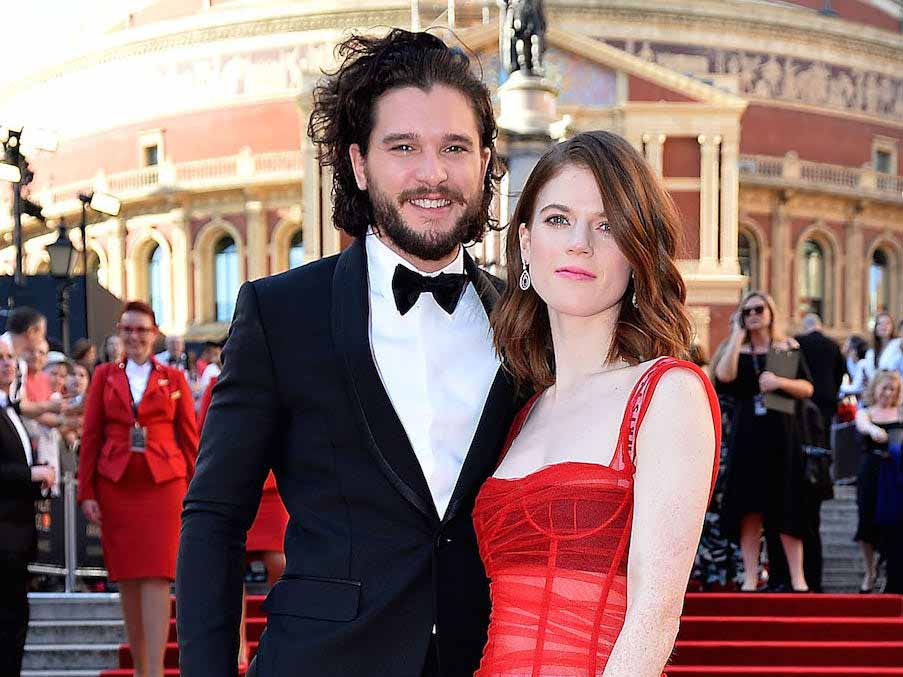 Rose Leslie isn’t much active on social media. She only has a Facebook page. Her Facebook page has 269.8k followers and 266.5k likes.

Rose Leslie has appeared in a number of impressive films and TV shows ranging from “New Town” to “Game of Thrones”. Through these, she has amassed an estimated net worth of US$ 5 million as of September 2020.