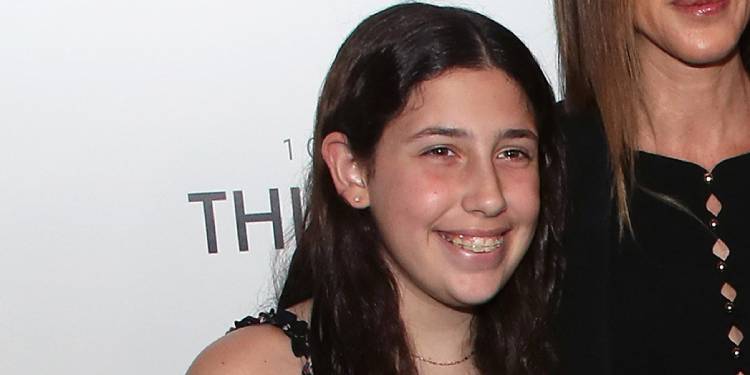 Sadie Sandler is an American child actress as well as a celebrity daughter. She is well-known in the entertainment industry for lending her voice to the role of Winnie in the third installment of the ‘Hotel Transylvania’ series.

In addition to this, she is also famous as the eldest daughter of actor Adam Sandler. Stay with us to discover more about Sadie and the details of her life.

Sandler’s full name is Sadie Madison Titone was born on 6 May 2006 in Los Angeles, California, the United States of America. Her mother’s name is Jacqueline Samantha Titone, and her father’s name is Adam Richard Sandler.

She is the eldest daughter of her parents and below her is her younger sister, Sunny Madeline Sandler. Besides this, she is currently 15 years old with the zodiac sign of Taurus.

Sadie’s father, Adam, is a prominent American actor, a comedian, and a moviemaker. He is also one of the most successful actors who has earned over $2 billion at the box office. Furthermore, he has also won 46 different awards and honors with 120 award nominations throughout his professional career as an actor.

Some of his most notable works include his comedy movie, ‘Jack and Jill’ in 2011, where he portrayed Jack and Jill Sadelstein. Likewise, he also portrayed Dracula in the ‘Hotel Transylvania’ movie series.

Similarly, Sadie’s mother is also a popular figure in the entertainment industry. She is also an actress and has appeared alongside her husband in numerous movies. Some of her most notable works came in films like ‘Big Daddy’ and ‘Deuce Bigalow: Male Gigolo’ in 1999. Her parents met for the first time on the set of ‘Big Daddy,’ and they have been together ever since.

Sadie Sandler is an American by nationality, and she belongs to mixed ethnicity. Her father has American ancestry, while her mother has Italian origin. Talking about her religion, she is most probably Jewish.

Her father practices Ashkenazi Jewish as his religion, and her mother used to practice Christianity as her religion. However, she converted to Judaism after her marriage. She is currently a student at the Tisch School of the Arts, pursuing her education.

Sadie is still a young teenager. Because of this reason, her height, weight, and related information keep on changing. Currently, she stands at the height of 5 feet and 5 inches (1.65m/165cm) tall, and she weighs around 44kg (97lbs).

Unfortunately, she has not shared the details about her body measurements. However, judging by her looks, we can tell that she has a slim body figure. Furthermore, her eyes are brown, and she has brunette hair.

Sandler is an actress by profession. She has followed in his father’s footsteps and also established herself in the movie industry. She made her debut appearance when she was only two years of age. She appeared alongside her father in movies like ‘You Don’t Mess with the Zohan‘ and ‘Bedtime Stories.’

In addition to this, the father and daughter duo has also played a lot of movies together. These movies are ‘Grown Ups‘ (2010), ‘Pixels‘ (2015), and the ‘Hotel Transylvania‘ movies series.

Apart from this, the young actress is not active on social media platforms. There are a lot of accounts with her name, but the authenticity of these accounts is under review. She may be staying away from the media to focus on completing her education.

You might want to check out Miranda Scarlett Schneider.

Sadie is currently single and not in a relationship with anyone at the moment. Considering her age, we can say that she has not had past relationships either.

She is currently enjoying the company of her parents and sister and is too young to be in a serious relationship.

Net Worth of Sadie Sandler

But we do know that she is living a life of luxury with her parents. Her father has an estimated net worth of around $420 million, and her mother has approximately $5 million.