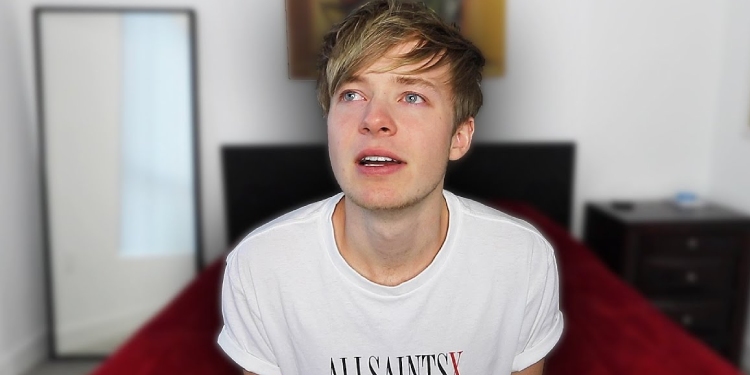 Sam Golbach is an American social media personality. He rose to prominence on Vine’s former social media platform after working with a musician, Colby Brock. They had over 1 million followers on Vine before the sad shutting down of the application.

Sam was born on 27 November 1996 in Kansas, the United States of America. His mother’s name is Cindy Golbach, and her father’s name is Kirk Golbach. His parents supported him immensely throughout his online journey. He was born and raised alongside his elder sister and his younger brother. His sister’s name is Allison Golbach, and his brother’s name is Ben Golbach. Besides this, he is currently 24 years old with the zodiac sign of Sagittarius.

Sam Golbach holds an American nationality, and he belongs to mixed ethnicity. But he has not shared any information about his ancestry at the moment. Besides this, he is a Christian, and he practices Christianity as his religion.

Golbach stands at the height of 5 feet and 8 inches (1.79m/179cm) tall, and he weighs around 57kg (127lbs). In addition to this, he is a fitness enthusiast, and he has a slim body figure. Moreover, he has a pair of blue eyes color with brown hair color.

Sam Golbach studied at the Blue Valley High School along with his friend and partner, Colby Brock. However, he has not shared any information about his further studies at the moment.

Sam began his career with his good friend Colby. They began discussing the content for their videos at a very young age. The first content of their video was pranking others and capturing their reaction. After that, the two of them would cause trouble to other people and upload it on their Vine account. Their videos began receiving many views within a short period, and they were also gaining followers. They had over 1 million followers on Vine before the unfortunate closing of the application.

Following this, they made their way on YouTube. Their main content for the channel was prank videos, and slowly they began maintaining blogs. They are famous for their hilarious acts and wicked sense of humor. The duo also founded the ‘The Life Project,’ which aims to help people practice healthier lifestyles.

Golbach has won the YouTube Silver Play Button and the YouTube Golden Play Button for crossing 100,000 and 1 million subscribers, respectively. He is pretty successful in what he does, and his fans indeed love him.

Sam got involved in a controversy when he titled a video ‘Following Fat People.’ This title was offending a lot of people, and it received a lot of protests. In addition to this, the duo was also banned from the Oak Park mall because their pranks included stuffing a couch in the mall’s life. Moreover, they stole the spotlight again when a prank video featured Colby getting kidnapped and shot. This video also got a lot of negative reviews and protests from the audience.

Sam Golbach is currently in a relationship with his girlfriend, and her name is Katrina Stuart. She is also an internet personality, and she is famous for numerous cover songs. However, there is no information about how the two of them met or when they met. Rumors say that they began dating in the year 2016. But the lovebirds decided to make it public only in the year 2017 through a music video. They are head over heels for one another, and Sam has also stated that Katrina is an essential part of his life. Besides this, he has not married anyone yet, nor does he have any children.

Golbach earns from his professional career as a blogger and a content creator. He also deserves it through his shared account with Colby. In addition to this, people can also purchase official merchandise from sites like Fanjoy and ShopXLPR. As of the year 2021, he has an estimated net worth of around $1.2 million.

Sam is active on social media platforms. His official Instagram account (@samgolbach) has over 1.4 million followers. Likewise, his official Twitter (@SamGolbach) account has over 834 thousand followers. In addition to this, he also has a shared Facebook page with his friend Colby (@SamandColby) with over 603 thousand followers. Moreover, he has over 2.19 million subscribers on his official YouTube channel, Sam Golbach. He also maintains his website (www.dumbandwise.com), where visitors can sign-up for free and view all the essential aspects that helped him shaped his career. People can also view live streams and articles by Sam on the website. He also has a shared YouTube channel (Sam and Colby) with his friend Colby with over 4.86 million subscribers.