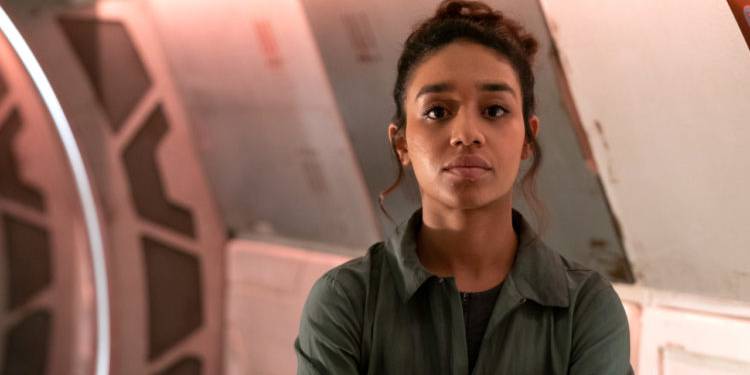 Savannah Steyn is an English actress. She is a young and talented actress who has dedicated her time and efforts to the entertainment industry since her debut performance in 2016. She has handled multiple recurring roles and has impressed the audience with her jaw-dropping performances. She has been a cast member of popular television series like The Tunnel and A Discovery of Witches. However, she recently landed in the limelight after the news of her role as Laena Velaryon in House of the Dragon spread on the internet. So, please stick with us to know more about her past, present, and upcoming works in the entertainment industry and her life journey.

Savannah is not active on social media platforms. She does not have a verified Instagram page and loves living a private life. However, there is an account (@sugargrungeprincess), and the bio resembles Savannah’s professional journey. However, it belongs to a different person who also goes by Savannah Steyn. She is an American director and playwright who has contributed her acting skills to on-stage productions.

What is Savannah Steyn Age?

Savannah is currently around 25–26 years old, as she was born in 1996. However, we cannot determine her birthday and zodiac sign because she has not revealed her date of birth to the public. She is extremely private and does not like sharing her personal information publicly. As a result, much information about Savannah’s early life and family members is missing from the mainstream media. We cannot determine her parents’ names and her siblings’ whereabouts (if she has any). While she gives her all on-stage, she prefers to keep the details of her off-stage life away from the cameras and public reach.

A Discovery of Witches is a British romantic drama and fantasy television series that aired on 14 September 2018. It has since released three seasons so far and has a total of 25 episodes. Furthermore, the series features star performers like Teresa Palmer, Matthew Goode, and Edward Bluemel. It has received mostly positive reviews from fans and was a hit in the entertainment industry.

Savannah Steyn became a cast member of A Discovery of Witches in 2018 when she secured a small role in the series. She appeared as a waitress in the first season’s fifth episode and had a small role. However, despite appearing for a brief period, people were quick to notice the young talent and her role. People talked about her appearance in the series for a long time, positively impacting her popularity and exposure as an actress.

Savannah Steyn is an English actress and citizen as she was born in Wandsworth, South London, England. While she has not revealed the details of her family background and ancestry, we know that she descends from African ancestry through her parents’ side. Furthermore, many online sources have also assumed that she belongs to British-African ancestry.

Savannah gave her debut performance as an actress in 2016. The first role of her professional acting career was that of Charlie in the short movie Fulcrum. The breakthrough moment of her acting career came a year later, in 2017, when she secured the recurring role of Kayla. She portrayed this character for three episodes of the mystery, crime, and drama television series The Tunnel.

Likewise, another one of the most notable works of Savannah’s acting career came when she secured her second recurring role. She played the role of Chantal for four episodes of the comedy television series Wannabe. She has since appeared in shows like Shortflix, Crawl, and Mister Winner. Furthermore, she is also responsible for appearing as Ash Harper for eight episodes of the science-fiction and drama television series Intergalactic.

According to an interview with Bradford Zone, science fiction has always fascinated Steyn, and she has always dreamt of starring in one. However, she was nervous when she secured the role of Ash Harper because she was working with veteran actors with much more experience than her in acting. Despite her nervousness, Steyn’s professionalism in acting helped her land a jaw-dropping performance of the character, and the audience praised her for her acting skills. In addition, she will also be portraying Laena Velaryon in the trending television series House of the Dragon, which is a prequel to Game of Thrones.

Savannah makes her fortune by working as an actress. Although she is still in her rookie years, she has landed recurring roles in different television series and has repeatedly impressed the audience with her acting. With her growing fanbase and popularity, major series are also approaching her for roles, and her future looks bright. Moreover, her hard work and dedication have paid off handsomely as she enjoys decent earnings throughout her acting career. According to online sources and assumptions, Savannah Steyn’s estimated net worth is around $200,000.