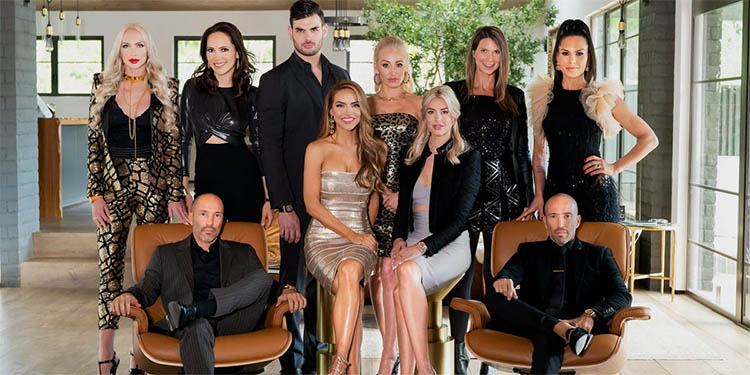 The program follows the story of brokers as they manage their work and personal life at the Oppenheim Group, a high-end real estate brokerage business in Los Angeles.
On March 21, 2019, the first season began with eight episodes. On May 22, 2020, the program was renewed for a second season, and on August 7, 2020, it was renewed for a third season. Netflix renewed the program for another 2 seasons 4 and 5 on March 11, 2021.

Vanessa Villela and Emma Hernan, commercial property brokers, have finalized a new transaction, although it was not in the home market this round. Netflix released a statement on Wednesday, May 26, saying that the two actors have joined the cast of Selling Sunset for its fourth and fifth seasons.

Emma Hernan also brings some commercial experience to The Oppenheim Group, as an angel investor and the CEO of Emma-Leigh & Co., a culinary firm. Per Netflix, “Hernan is a self-made multi-millionaire, with large real estate clientele and an even larger heart,” Emma “entered the real estate market” when she wanted to buy her personal multimillion-dollar property and then proceeded to purchase commercial properties for herself.

“As a professional model, many notice me,” Emma Hernan says on her company’s website. Something they don’t see, though, is my profound desire and determination to excel on every level.” “Whether it was studying in between modeling jobs at fourteen years old, practicing hours on end every day for national swim competitions, or learning at the foot of top professional chefs, I have always been driven,” she says.

Vanessa Villela is a well-known television actress. Vanessa is also recognized for her guest parts in shows such as Amores de Mercado and Eva Luna, along with her Premios Tu Mundo-nominated lead role as Sara Montero in the telenovela Una Maid en Manhattan.

Vanessa has a long and illustrious career in the entertainment sector. Tough Love, Eva Luna, En Otra Piel, and Super Bomberos are among her acting credits. While she is most recognized for her roles as Emiliana in El Seor de Los Cielos and Sara in Una Maid en Manhattan, the Mexican-American actress has become a realtor.

Furthermore, she has joined the cast of Netflix’s Selling Sunset for its upcoming fourth and fifth seasons. Her presence on the show is primarily on her changeover from live actor to new real estate agent.