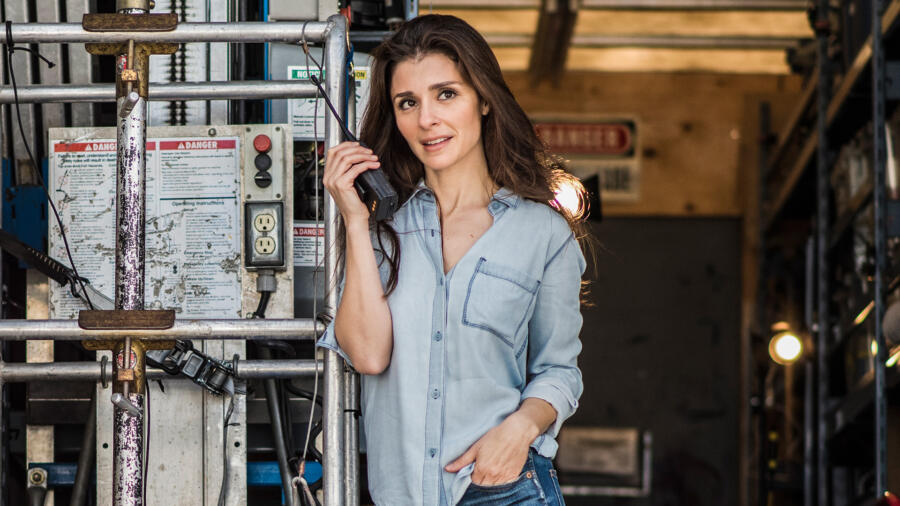 Shiri Appleby is one of the most charming, beautiful, and talented American Actress and a film producer. On December 7, 1978, she was born in Los Angeles, California, united states of America. Shri was active from 1985 and is still working and contributing a lot to the film industry. This beautiful actress is married and has two beautiful children.

Shiri Appleby was born on December 7, 1978, in Los Angeles, California, united states of America. She was born to Jerry Appleby and Dina Boulder Appleby. Her father, Jerry Appleby, was an executive on one of the telecommunication offices, and her mother, Dina Boulder Appleby, was a school teacher. Her mother was born Israeli and holds Moroccan descent- Jewish, and her father is American.

Shiri belongs to American nationality, and she holds the mixed ethnicity of Moroccan- Jewish and American. Besides her father and mother, she has a little brother named Evan Appleby. Though she was born in the city of Los Angeles, her parents raised her in Calabasas. Her interest in acting began when she was just six years old.

Shiri Appleby is a professional American Actress. She is so beautiful and natural. In an interview, Shiri Appleby has stated that the secret to her beauty is her care for the skin. She is a tall and elegant actress, with a total height of  5 feet and 3 inches(162cm). The total weight of her body is 50 kg(110 pounds). Her feet size and dress sizes are 6.6 US and 4 US, respectively. Her zodiac sign is Sagittarius.

She is blessed with a gorgeous body figure of 32-23-33 inches. The color of her hair is brown, and the color of her eye is Dark brown. Besides acting, Shiri Appleby loves to spend much of her time with her family.

Shiri Appleby is famous for her outstanding acting skill in different movies. After her incredible performance in movies and TV series such as Unreal and Roswell, she was known to her fans. Shiri Appleby is also famous for her behavior towards the junior artist and the crews. Some of her phenomenal works include A Time for Dancing, Havoc, Charlie Wilson’s war, swimfin, and The devil’s Candy.

Shiri Appleby started her career in acting at her early age. Her parents used to take her to various shows. She did advertisements for brands such as M&M’s and Cheerios when she was just four years old. Shiri was cast for many advertisements and shows. Later in 1987, she was cast in a TV program named Thirtysomething. This was her first professional acting in a big show.

Shiri debuted in the movie as Annie Winslow in The Killing time. The next year, she was cast as Grace Newman in the movie named CurseII: The Bite. Her famous movies include Family prayers; I love you to Death, Deal of a life tie, A time for Dancing, Swimfan, Havoc, and many more.

She first acted like a little girl in the third episode of Santa Barbara. Later, she was cast on the popular series Thirtysomething. Her popular acting in the Tv series includes Mystery Magical Special, Go towards the lights, The Bronx zoo, Dear John, Knight& Daye, Knots Landing, The Adam-12, Sunday Dinner many more.

For her performance in the movie Roswell, she was nominated for TV-Choice Actress. Her first nomination for director was the show named Unreal. She was nominated for an Outstanding show directed by a woman. In 2014, she was nominated for Best Guest Actress in a drama series for her work in the series named Law& Order: Special Victims Unit. Observing her natural acting, we can conclude that she will definitely win some prestigious Awards in the future.

Shiri Appleby started dating Jon Shook in 2010. Jon was a chef. They met each other on her trip to Italy. This couple got married in July 2012. They have two childrens altogether. Her first child was a daughter named Natalie Boulder shook, and her second child was a son named Owen Lee shook. They are happily married and currently living a peaceful life with their childrens.

What is Shiri Appleby’s Net worth?

According to January 2021, her total net worth is $1 million from Los Angeles Times.

She bought a house in the hills of California for $1.795 million.