lockercodes.meprivatephotoviewer.comfbhtool.comjozilla.netin-kahoot.comcmspinslink.comfreefirenews.me
Skip to content
Home » News » Everything We Know About Stranger Things Season 4

Everything We Know About Stranger Things Season 4 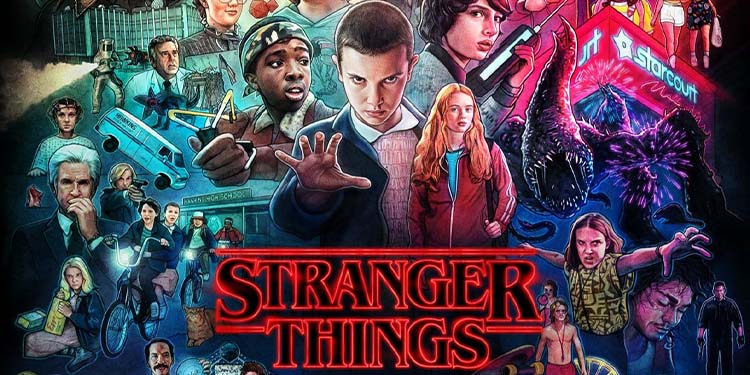 Stranger Things was under production for its fourth season when the COVID 19 pandemic hit, halting the shoot. However, the filming has started again, and now we are going to get to see the fourth season of the amazing Netflix show on our screens somewhere around mid-2022.

What is the new season going to be like? And what are the surprises that we can expect to see? Keep reading to find out as we teardown the upcoming season of Stranger Things for you.

So far, Netflix has released a teaser confirming the show’s return on the OTT platform in 2022, but nothing else has been revealed as to when exactly it is going to a premier or how the plot has changed.

In Season 3 of Stranger Things, we saw that the residents of Hawkins, Indiana spent their summer defeating evil forces from other dimensions and going to the mall like regular people. But the ending of the show stood quite as a cliffhanger, and fans can hardly wait for the next season to begin airing.

Cast members Millie Bobby Brown and Finn Wolfhard are set to continue their prime roles in the fourth season of the series along with the fellow cast members Gaten Matarazzo, Noah Schnapp, Sadie Sink, and Caleb McLaughlin, as the core group of friends.

Charlie Heaton, Natalia Dyer, and Joe Kerry with Maya Hawke are set to continue as the teens. The newly promoted regular Brett Gelman will continue too with his group of adults consisting of actors like Winona Ryder, Cara Buono, and Harbour. And don’t forget Priah Ferguson as Lucas’ rather gifted little sister.

Unfortunately, some characters have been cut off from the new seasons, with Billy, who proved that he was, in fact, good by heart by sacrificing himself to stop the Mind Flayer in season three, ending his run. Alexi, aka the Hopper’s Russian hostage who also was tragically killed, will also not be making a return in the show.

Although many fans would love to see the Slurpee-lover appearing back, at least on cutback scenes.

Many new characters have been cast into the show for the new season with some really interesting stories. Actor Robert Englund is coming as Victor Creel, an intimidating psychotic man who is locked up in a mental hospital. Jonathan is set to get a new best friend in Argyle, played by Eduardo Franco, who is a stoner, pizza boy. Joseph Quinn is joining as the head of the Hawkins High D&D Club, The Hellfire Club. There are other inclusions as well, like Dimitri, a Russian prison guard, Yuri, an unpredictable smuggler, Jason Craver as the high school jock who dates the most popular girl in school and many more, who will make the show all the more exciting.

While it appeared that at the end of Season 3, Hopper was exterminated when Joyce closed the portal to the Upside Down that was hidden in the Russian Bunker underneath the mall, but in actuality, things might not have gone down the way they seemed.

As a credits sequence showed Russian guards taking a prisoner to feed a Demogorgon, it was made clear that it was not “the American.”

However, fate looks harsh for Hopper as he is still imprisoned in the Russian cell.

“It’s not all good news for our ‘American’; he is imprisoned far from home in the snowy wasteland of Kamchatka, where he will face dangers both humanâ€¦ and other,” the actors confirmed in an interview.

“Meanwhile, back in the states, a new horror is beginning to surface, something long-buried, something that connects everythingâ€¦ Season 4 is shaping up to be the biggest and most frightening season yet, and we cannot wait for everyone to see more. In the meantime â€” pray for the American.”

In Hawkins, it appears the kids might be getting back into Dungeons and Dragons again as some footage released by the official page for the show on social media shows some dice rolling and also Kerry carrying a flag of the Hellfire Club.

By the way, that’s what the first episode, too, is named after, “The Hellfire Club.”

According to the writers for the show, they confirmed that the title for the second episode is “Tick Tok Mr. Clock,” and the third one is called “You Snooze You Lose.”, photos of wallclocks have appeared in several posts made by the page. It is already mindboggling as to what exactly might be the makers thinking to make the show even more suspenseful and thrilling in the upcoming season.

WHEN’S IT COMING BACK?

Filming for the fourth season had just started and was about a month in motion when the pandemic hit and forced the production to halt. However, resuming at the end of September last year, the show production has picked up the pace and is now set to air in 2022, perhaps only a few months off the regular deadline as it was first scheduled to be released in Late 2021.

We got to see the teaser released on August 6, 2021, which didn’t give much new information, but as far as we know, it will be in the first half of the year that the show will be available to watch on our screens. So is it likely that Netflix might hold the airing until the fall of next year? Let’s hope not because that would mean a long, long wait for all the fans involved.

MORE SEASONS IN DAYS TO COME?

There had been speculation that the fourth season of Stranger Things would be the last, especially because the young actors who were growing up didn’t look like middle schoolers anymore. However, during an interview, Ross Duffer, the producer of the show, has confirmed that the story is still far from being wrapped up.

“Season 4 won’t be the end,” he said. “We know what the end is, and we know when it is. The pandemic and the lockdown have given us time to look ahead, figure out what is best for the show. Starting to fill that out gave us a better idea of how long we need to tell that story.”

THE SIGNIFICANCE OF ELEVEN?

While the exact premiere date for the show has not yet been released by Netflix, they too know that a multi-year long wait is not going to be the good thing for Stranger Things, which is why they have revealed teasers to keep the anticipating fans engaged as they look to wrap up production.

The minute-long teaser clip released by the show focuses on Eleven. In what appears to be a flashback of a facility where our favorite teen was raised. As the clock strikes 3, as we know, the second episode is called ‘Tick Tok Mr. Clock,’ children are seen playing games that appear to be Demogorgon chess. A magic 8 ball reads “signs point to yes,” and a man comes in and says “Good Morning, Children,” as the camera pans to the door with the number 11 on it.

Our favorite character Eleven wakes up, startled. What this signifies is well beyond our comprehension. If you have some good theories, make sure to mention them in the comment section.