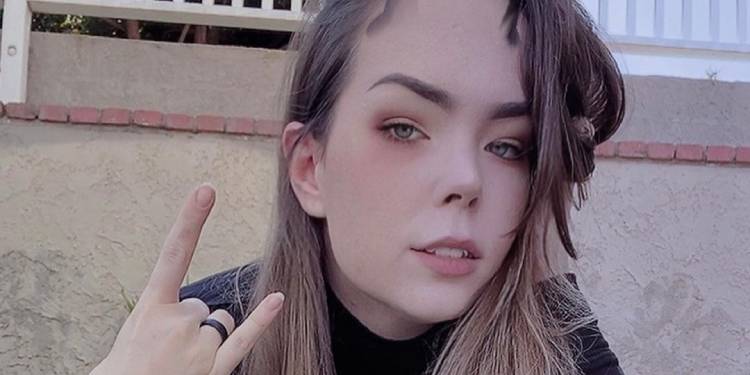 Suzy Berhow is a social media sensation. She rose to prominence through her three YouTube channels, where she likes posting gaming content and daily vlogs. In addition to this, she is also famous as the beautiful wife of Arin Hanson, an internet personality. She is also renowned as the Let’s Play web series host called Game Grumps.

Suzy Berhow’s full name is Suzanne Berhow. She is very popular in the media through her internet pseudonym, “Mortem3r.” She was born on 3 July 1989 and is an inhabitant of Orlando, Florida, United America. Unfortunately, she has not yet revealed the name of her parents at the moment. However, we know that she has five siblings, and she is the youngest member of the family. She has three brothers, and their names are Matt Berhow, Charlie Berhow, and Joey Berhow.

Likewise, she has a sister named Ginger Berhow and an identical twin sister named Jean Berhow. She is younger than Jean by only 15 seconds. Besides this, she is currently 32 years old with the zodiac sign of Cancer. She is an American by nationality, but she has not shared the details of her ancestry. Likewise, her educational background and religion are also currently a mystery.

Suzy Berhow stands at the height of 5 feet and 6 inches (1.48m/148cm) tall, but she has not revealed her exact weight. Furthermore, her exact body measurements stay behind the curtains at the moment. However, looking at her pictures, we can determine that she has a well-maintained body figure, and she has inked a lot of her left arm. In addition to this, her eye color is hazel, and she has brown hair color. However, she loves dying her hair blonde.

Suzy Berhow is a social media sensation. She has established herself well in the entertainment industry as a YouTuber, and she currently works on three different YouTube channels. She began her first channel (@meeperfish) on 11 May 2007. She is no longer active on the channel, but she created cartoons based on different stories on the channel. Her fans used to send in their stories, creating a cartoon story for her subscribers. Despite her inactivity on the channel, she currently has over 35 thousand subscribers.

Likewise, Suzy Berhow started her second channel (@Mortem3r) on 28 April 2012. She currently has over 291 thousand subscribers on the channel. She uploaded the channel’s first video on 29 April 2012 called Mochi the Napoleon munchkin cat plays fetch. She features her cat playing fetch with her in the video. She has been active on the channel ever since and has uploaded several similar videos. In addition to this, she has also promoted numerous brands like Envi Shoes and Romwe through her videos.

She has also done a lot of makeup tutorials like Gyaru Spring Makeup Tutorial and How to Make Your Eyes Look Big. She also enjoys connecting with her fans as she has also done a lot of questions and answers sessions for her fans. She also likes updating her fans about her daily life through her channel. She enjoys trying on different outfits for her fans, like the fall transitional outfits and even Halloween costumes.

In addition to this, Suzy Berhow is also a gamer. She loves playing different online games like Magic Kingdoms and Tiny Big Garden. She then records her gameplay and shares it with her fans through her third channel (@KittyKatGaming). She began the channel on 23 July 2014 and has since garnered over 43 million views on her content with over 321 thousand subscribers. She has also played other games like Super Mario Party and Overwatch.

Talking more about her professional career, Suzy Berhow is also currently working as an artist and a designer for her shop called Psychic Circle. Fans can visit the website and purchase various items like sweaters, pullover hoodies, beanie hats, and more.

Suzy Berhow is a married person. She has been in a marital relationship with her husband, and his name is Arin Joseph Hanson. He is also an internet personality just like her and is popular through his internet pseudonym, “Egoraptor.” They walked down the aisle together on 24 October 2013 and have been in a relationship for over eleven years as of now. Moreover, numerous online sources suggest that they started their romantic journey in 2011.

Suzy and Arin have not yet welcomed any children of their own. However, they do enjoy their lives together as boyfriend and girlfriend. However, they do own three cute kittens, and their names are Mochi, Mimi, and Otto.

Net Worth of Suzy Berhow

Suzy Berhow earns from her professional career as an internet personality. She has a lot of subscribers on her YouTube channels. In addition to this, she also runs her own online business, from where she also generates a handsome amount of fortune. As of 2021, she has an estimated net worth of around $1.5 million and $6 million.