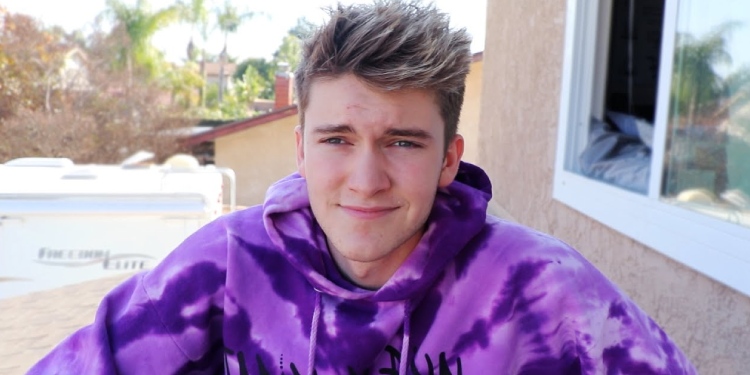 On July 24, 2000, he was born in Wichita, Kansas, United States of America. Leo is his zodiac sign. He was born and raised in Augusta, Kansas. The name of his mother is Kim Braungardt, and the name of his father is Jamie Braungardt. His parents divorced when he was four years old, and then he and his siblings moved in with their mother.

He, too, has two siblings: a younger sister Taylor and an older brother Tristan. Tanner’s vlogs frequently involve both of his siblings. Tanner’s mother, Kim, is a strong supporter of his ambitions. Tanner is a citizen of the United States.

Going on to his educational history, he has also posted a video titled “WHY I DROPPED OUT OF HIGH SCHOOL AT 16 YEARS OLD.” Nevertheless, he did not drop out but rejoined for his high school graduation in May of 2018.

Tanner Braungardt is 5 feet 9 inches (175 cm) tall and weighs around 65 kg. He has a charming and appealing appearance that has drew the attention of many teen females. Likewise, he has dark blue eyes and blonde hair.

The rise in his Career

Tanner Braungardt is a well-known teenage YouTuber from the United States. He began his social media debut at the age of 11, and on September 1, 2011, he created his self-titled YouTube channel. Tanner made his YouTube debut by sharing videos of his outrageous trampoline escapades, by which he received a lot of love from fans worldwide.

His first launch video, entitled “Epic trampoline net FAIL,” was released on September 1, 2011, and has received about 330,268 views. At the age of 16, he turned free-running and trampoline jumping into the next big thing for teens. His YouTube account consumes most of his time and has attracted millions of views to each of his videos.

His YouTube channel currently has over 4.49 million subscribers and around 1.2 billion cumulative views. His YouTube channel was even named one of the top 100 fastest-growing channels in the globe. He also has his website, promoting his future events and selling custom apparel and accessories.

That 20-year-old kid began with filming trampoline stunts, cliff jumping, bridge jumping, and teaching my friends and mother how to perform backflips, and has now expanded to include bathtubs full of bizarre items, fanmail opens, challenges with my brothers and friends, and much more.

Is he dating anyone?

Tanner Braungardt is present without a partner. Tanner Braungardt is content with his single existence, spending time with his friends and concentrating on his profession. Furthermore, he is still too young to be married right now and seems to have a long way to go before committing to a relationship.

However, he has a history with a lady named Paris Anderson from Augusta, Kansas. In addition, he included her in a few of his videos. Tanner also made a video about the offensive comments she encountered on her Instagram account, saying it upset him when individuals close to him got targeted. The couple, however, split up.

Tanner Braungardt is a well-known YouTube social media celebrity who has amassed a sizable fortune. At the age of 16, this young social media superstar already owns two automobiles. According to estimates, he has a net worth of more than $3 million.

He seems to have more than 36k followers on Facebook, while on Twitter, Tanner Braungardt has 404.6k followers. In the same way, he uses the Snapchat handle Tanner B24. His YouTube channel presently has around 4.49 million subscribers.