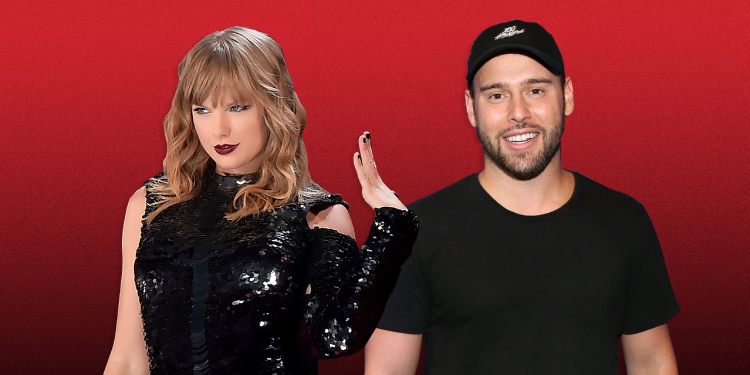 Taylor Swift is an American singer and songwriter. She has landed several hit songs and is often known for sharing her personal experiences through her songs. However, she recently landed in the spotlight to fuel Scooter Braun’s divorce from Cohen Braun’s wife. Scooter Braun is an American record executive and investor. Taylor and Scooter have tangled each other in disputes since the year 2019. This began when Scooter allegedly sold her work for over $300 million for himself. Please stick with us to know more about what happened between them.

The feuds between Scooter and Swift began spreading in the media in the year 2019. This incident occurred when Swift promoted her album ‘Lover.’ Scooter acquired her masters through the Big Machine Records and sold them to the equity firm Shamrock Holdings for $300 million. According to Swift, she tried to get her hands on the masters for years, but Big Machine Records would provide unfavorable conditions.

However, according to Scott Borchetta, former president of Big Machine Records, she rejected a chance to buy the masters. Not only was Swift involved in a dispute with Scooter, but she was also having disputes with the record company. In addition to this, she also stated that Scooter was an incessant, manipulative bully.

This created a division among the supporters of two huge names. Musicians like Halsey and Iggy Azalea supported Swift, and they also started a hashtag #WeStandWithTaylor for fearlessly taking a stand for herself. On the other hand, Scooter had supporters like Justin Bieber and Demi Lovato, who claimed that a confused mob was bullying him. Following this dispute, Scooter also separated from his wife, with whom he had been together for seven long years. Rumors say that it was because of Swift, while some say it was because of his involvement with Erika Jayne, ‘Real Housewives of Beverly’ star. However, the exact reason for their separation remains a mystery.

Yael Cohen Braun and Scooter Braun began dating each other in 2013 and married in 2014. Through their marriage, they have three children whose names are Jagger, Levi, and Hart. According to a report from PageSix, the couple has been facing difficulties in their relationship for a couple of months. As a result, they decided to take a break from their relationship, but this does not necessarily mean divorce. A source told PageSix that they were not divorcing as they were friends. The two of them also recently exchanged comments wishing each other a happy anniversary.