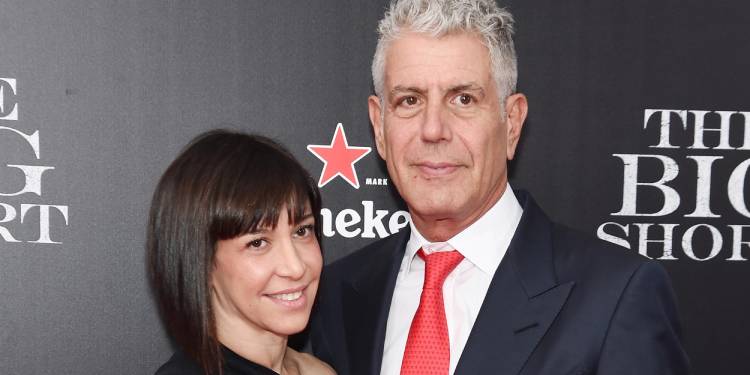 Anthony Bourdain was a famous American chef who became popular for his French and eclectic style of cooking. He is also renowned for his unconventional approach to dishes and his life. His romantic life was also pretty much the same. His first wife was Nancy Putkoski. She was her high school sweetheart, and they were together for almost 20 years. Sadly, they had to part ways because of the rising popularity of Anthony Bourdain in the food industry.

According to a report by New York Times, Ottavia Busia-Bourdain’s initial career plans were to study dentistry and become a dentist. However, all of these plans changed when she fell in love with an Irish musician. She eloped with him to the United States in 2000 with only $300 in her pocket. This ended her hopes of being a dentist, and she could not speak English fluently either. But she chose to face her challenges and make her life work. She began working in restaurants like Sette MoMA, Le Bernardin, and Café des Artistes. Later, she was able to land a job at Geisha, a Japanese restaurant. Here, she met her future husband, Anthony Bourdain.

Ottavia met Anthony through her work

Ottavia Busia-Bourdain and Anthony Bourdain’s first meeting took place at her workplace, Geisha. Eric Ripert was a consulting chef at the restaurant, and he convinced them to meet each other. After meeting each other and spending some time, his understanding of the food industry impressed her. According to a report by Married to a Chef, she stated, “Working in the restaurant business was definitely what brought us together. “We used to meet after my shift was over, and we would stay up for hours drinking beers, talking about my day at work.”

In addition to this, she also stated that their conversation would have bored anyone else, but they enjoyed talking to each other. Their shared interests helped them bond a lot, and they even got matching tattoos during the initial days of their relationship. Moreover, they liked partying, drinking, eating, and smoking. Furthermore, Anthony was all ears when listening to her as she reminded her a lot of his memories.

Ottavia is not afraid to criticize the food.

Busia-Bourdain does not back off when it comes to tasting lousy food. Once, she talked about a horrible steak experience when she was in Las Vegas. She stated that it was “the worst steak” she ever had and compared it with meat bought from a supermarket carelessly defrosted and prepared in a hurry under the sink.

Chef Charlie Palmer was the one who served her with the steak, and he came up and apologized for the horrible experience. He further said, “It is always a downer to hear something like this, particularly when it concerns the wife of a colleague.” She thanked him for being honest and called him a great chef and a gracious person.

Ottavia stated that she loves practicing martial arts. She even stated the world of martial arts was a blessing for her. She studied at the Renzo Gracie Academy and took part in numerous competitions. She said that it allowed her to express and release her emotions freely. In addition, this event brought a positive change in herself as she stopped drinking and smoking and adapted to a healthier and fit lifestyle. She regularly practices the sport and is firmly attached to it.

Ottavia and Anthony are no longer together

After being together for almost a decade, Anthony and Ottavia parted ways. The main reason for their separation was his busy work schedule, because of which he was not able to give quality time to his family. His first marriage came to an end for similar reasons. After their divorce, he started dating Asia Argento, an actress.

This made Ottavia think that he has changed as a person. But she was aware that he was visiting a therapist, so she thought not to jump to any conclusions. Unfortunately, this was the decision she would go on and regret for the rest of her life as he committed suicide. Ottavia mentions that if she had kept a closer look on him, maybe she could have prevented the tragedy.