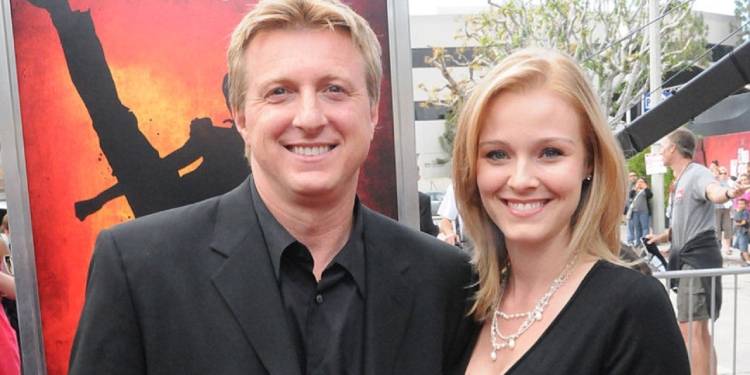 Stacie Zabka is a well-known figure in the entertainment industry because of her marriage with ‘The Karate Kid’ actor, William Zabka. The two lovebirds keep stealing the spotlight with their love story that has been going on for over a decade. Unlike most celebrities who like going on all kinds of dates, Stacie and William have stayed committed to one another, and the fans love seeing them together. Please stick with us to know more about their love and how they began their romantic journey.

William Zabka is a well-known American actor. Among all of his performances, he is famous for portraying the role of Johnny Lawrence in the 1984 martial arts movie, ‘The Karate Kid.’ Likewise, he landed a remarkable role in another martial arts television series, ‘Cobra Kai.’ He portrayed the role of a bully in ‘The Karate Kid,’ but he appears as a protagonist in ‘Cobra Kai.’ In an interview with People, he mentioned that he was delighted to see people rooting for his role.

Apart from his acting career, he is also a writer and producer. He won a nomination from the Academy Awards for his contribution to the script and production of the Czech live-action movie, ‘Most.’ Born and raised in New York City, William’s father also worked in the entertainment industry. He worked as an assistant director for the late-night talk show, ‘The Tonight Show Starring Johnny Carson.’

Talking about the personal side of William and Stacie’s life, they are famous as a celebrity couple. However, they have not shared the details about their relationship. Things like how they met or when they met are currently a mystery. But we can be sure that the couple was certainly in a relationship for a long time before their wedding. Their wedding itself was a secret ceremony held back in the year 2008.

According to the couple, they felt like marriage is not something they should be doing in the spotlight. Therefore, it was an intimate wedding with only close friends and family present. Likewise, the couple prefers to keep their personal life away from the media’s attention. Though the media has successfully captured the actor and his wife on several occasions, most of the details of their love life stay behind the curtains. However, we do know that the couple has welcomed two kids from their relationship. Likewise, the couple has not publicly shared the names of their kids either.

William once mentioned that he does not want his kids to watch ‘The Karate Kid’ until they become of age. The reason behind this is hilarious. He stated that his kids started questioning him when they found a picture of William kicking Daniel LaRusso during a scene in the movie. They were quick to ask him if he was fighting the boy and if he won the fight.

Unfortunately, all of the viewers know that though William was kicking someone else’s butt, he ended up eating a crane kick. He likes to keep his children from seeing the whole movie as he loses the fight in the end. William thinks it is not a good idea to show his kids their father’s loss.

As of now, William and Stacie Zabka have been in a marital relationship for over a decade. Their love is unique and strong, and they have been with each other for a long time. Sure they might have their problems from time to time, but they have always overcome these problems and stay committed to one another. Likewise, William Zabka’s professional career has also not caused any issues in their lives. They live happily with each other with their two kids and are looking forward to happier years to come.